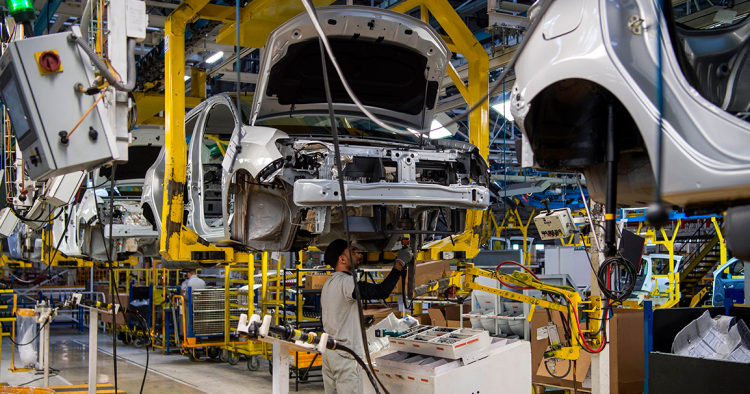 STMicroelectronics, one of Europe's leading semiconductor manufacturers, will very shortly inaugurate a new production line in Morocco to manufacture electronic chips for American electric car pioneer Tesla. The production line is the latest example of a larger trend among international firms to look to Morocco as an attractive location for “nearshoring.” Through Rabat's smart infrastructure investments and careful management of its foreign partnerships, Morocco has already exploited this trend to emerge as Africa's leading automaker. Now with an auto chip production line dedicated to electric vehicles (EVs), Morocco is positioning itself to become a center for EV production while turning itself into a strategic component of Western semiconductor supply chain resilience.

According to Moroccan media, STMicroelectronics will soon inaugurate an EV chip production line at the Franco-Italian company's facility in Bouskoura, an industrial town on the outskirts of Casablanca. STMicroelectronics' Bouskoura plant already began some initial production for Tesla in June 2021 with its existing lines. Morocco's EV chip production will help alleviate the critical global shortage of automotive microchips, aiding EV automakers to maintain their production schedules in the rapidly advancing electric car market.

An electronic microchip is an integrated circuit (IC) imprinted on a very small semiconductor. These semiconductor ICs, commonly called “chips,” form the fundamental components of all electronic devices and have propelled economic growth and innovation through the digitization of goods and services. Automobiles have been no exception to the trend — a typical, contemporary car employs upwards of 1,400 semiconductor chips. Engaged in IC product design, manufacture, and sales, STMicroelectronics is Europe's largest integrated device manufacturer with auto chip components accounting for 38% of its pre-COVID annual revenue.

The roll-out of 5G, which requires semiconductors of the same, larger node sizes as auto chips, compounded by the increasing use of artificial intelligence and the development of the Internet of Things, has created a surge in competing demand for chips that is putting supply pressure on automakers worldwide. The post-COVID-19 global supply crunch in chips has caused significant automotive production slowdowns. General Motors and Ford Motor, for example, expect 2021 earnings reductions of upwards of $2 billion and $2.5 billion respectively due to supply delays. The shortage has highlighted the automotive industry's dangerous dependence on Asian semiconductor manufacturers, prompting U.S. and European automakers to increase their efforts to find alternative sources of supply.

The demand pressure is being exacerbated by the growing popularity of electric passenger cars, which are on track to become the dominant form of mobility during the 2030s. Next to the electric battery itself, chips are perhaps the most vital part of an EV. Requiring significantly more chips than internal combustion engine (ICE) cars, electric cars need a large number of semiconductor ICs for their battery management systems to ensure safety by regulating the electric power train as well as optimizing the energy efficiency of battery charging and use.

With the capacity to produce over 700,000 vehicles per year, Morocco has successfully positioned itself to become the hub of an Africa-to-Europe, automotive manufacturing value chain. The rise of Morocco's automotive industry is the result of the strategic integration of infrastructure investment with an industrial manufacturing chain that is now serving as the foundation of a Morocco-centered West Africa-to-Western Europe commercial corridor.

Morocco's al-Boraq high-speed rail line — the first of its kind in Africa — is the transportation backbone of Morocco's Africa-to-Europe value chain. With the 2018 inauguration of its first segment connecting Tangier to Casablanca, the Boraq line is linked to Morocco's new state-of-the-art Tanger Med port on the country's Mediterranean coast 40 km east of Tangier. Upon the completion of the port's June 2019, Phase Two development, Tanger Med became the Mediterranean's largest port with a total container capacity of 9 million twenty-foot equivalent units, surpassing Spain's Algeciras and Valencia ports.

Groupe Renault established a second Moroccan manufacturing plant in Tangier to benefit from the expanded Tanger Med port and rail link. In 2019, Europe's third largest automaker sent six trainloads of Renault vehicles daily from its Tangier factory to the Tanger Med port for shipment to end-markets. In June 2019, France's Groupe PSA, Europe's second largest automaker, opened a manufacturing plant in Kénitra, north of Rabat, because of the Boraq high-speed rail link to the Tanger Med port.

In early 2019, prior to COVID-19's onset, automotive sector sales accounted for 27.6% of Morocco's exports. The country’s current vehicle production, led by Groupe Renault and Groupe PSA (now Stellantis), is supported by approximately 200 international suppliers operating their own local manufacturing plants, including major firms headquartered in Germany, France, Italy, Spain, Belgium, Japan, and the United States. The American firm Lear, ranked 179 on the Fortune 500 list, operates 11 production sites in Morocco for automotive seating and electrical systems manufacturing. Chinese manufacturers are using the opportunity of the Peugeot plant in Kénitra to integrate into the value chain, such as CITIC Dicastal, whose $400 million Kénitra plant can produce 6 million pieces annually to supply Peugeot.

During the years immediately prior to the outbreak of the COVID-19 pandemic, global supply chains were already starting to shorten as companies and countries placed greater emphasis on resiliency than on immediate cost efficiency. For Europe, this structural transformation meant bringing sourcing and manufacturing closer to European end-markets. The imperative to “nearshore” while maintaining a competitive advantage in operating expenditures has provided an impetus to international firms to locate manufacturing facilities in Morocco. In the post-pandemic environment, the accelerating drive to shorten supply chains is now providing Morocco an on-ramp to enter the EV manufacturing value chain.

The STMicroelectronics agreement with Tesla seems to be just the leading edge of a wave of EV chip production in Morocco that could provide a pathway to EV manufacturing in the North African nation. Following Tesla, Groupe Renault signed a strategic cooperation agreement with STMicroelectronics for the supply of electric and hybrid vehicle advanced power semiconductors to be produced by the company starting in 2026. In 2021, Renault launched its Dacia Spring EV in Europe, marketing it as the continent's cheapest electric car. While the car is manufactured by Renault in China, chip production in Morocco raises the prospect that the Dacia Spring or successor EV models could be manufactured in Renault's Morocco plants. Stellantis has started manufacturing the new Peugeot e-208 EV in its Trnava plant in Slovakia. Morocco's Kénitra plant already manufactures the ICE version of the 5-door hatchback Peugeot 208. Since the e-208 uses the same chassis as the gasoline-powered Peugeot 208, the e-208 can also be easily assembled in the Kénitra plant.

Through its new EV chip production line, Morocco will soon play a greater strategic role in securing Western semiconductor supply chains. Given its proven track record as an automotive manufacturing hub, chip production could become the catalyst for the establishment of EV manufacturing in Morocco. With its ability to service end-markets in Europe as well as emerging ones in the Middle East and Africa, Morocco is poised to become a leading electric car manufacturer in the MENA region.

Professor Michaël Tanchum is a non-resident fellow with the Middle East Institute's Economics and Energy Program. He teaches at Universidad de Navarra and is a senior fellow at the Austrian Institute for European and Security Policy (AIES) and visiting fellow in the Africa program at the European Council on Foreign Relations (ECFR). The views expressed in this piece are his own.

Why many Tunisians are celebrating President Saied’s decision