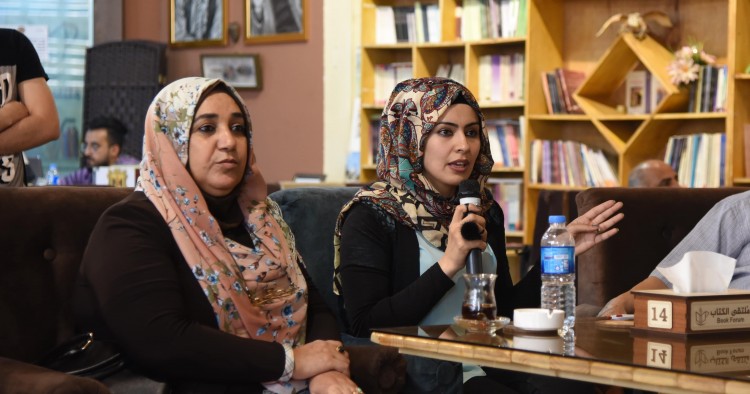 The spiritual cousin to the Shabandar Café — Baghdad’s literary heart that survived being bombed by extremists in 2007 — Mosul’s Book Forum is both an intellectual refuge and a laboratory for discussion and cultural expression.

The café in the university district, the brainchild of Fahad Sabah and Harith Yassin, offers visual proof of the old Arab proverb: Egyptians write, Lebanese publish, and Iraqis read.

Until the recent pandemic lockdown, students and professors, writers and bibliophiles filled the eclectic space — framed by portraits of Middle Eastern and Western writers and photographs of Mosul in the 1930s — and devoured books. Under the gaze of everyone from al-Mutanabbi himself, Iraq’s famed 10th century poet, to the late great Palestinian writer Mahmoud Darwish to Dostoyevsky, patrons pored over books in Arabic and English, from Kafka to Naguib Mahfouz, and struck up lively conversations.

The Mosul Book Forum was also a performance space for local musical and theatrical groups, as well as a venue for readings by local and international authors. Since the café opened in January 2018, shortly after the liberation of Mosul, the likes of French travel writer Sylvain Tesson and a few other foreign writers have made appearances, but the café also functioned as a kind of de facto publishing house, paying half of publication costs for authors and offering them the café for book launches.

It’s hard to believe that such a cultural hub was born out of the misery and oppression of the ISIS occupation of Mosul. But the current corona lockdown that has once again cut off the city from the outside world, has inspired Sabah to continue the Forum’s important work online, with ongoing virtual readings, Zoom literary discussions, and plans for a post-pandemic international book fair.

Led by Omar Alsarai, a group of poets who used to read at the Book Forum, including Saad Mohammed, Fahad Asaad, and Hana Ahmed, have taken their work online, with a series of poems recorded in their homes and shared on Facebook. The online series now includes poets from all over Iraq, uniting the nation through verse under lockdown. Just like under the siege of ISIS, literature in the time of corona has become an essential tool for psychological survival, says Sabah. “My books are like old friends I can turn to in times of trouble.”

While the current situation is not as dire as the one from 2014-17, even though Sabah says he is struggling to pay the rent for his shuttered café, the sense of fear is familiar. As he seeks solace in his beloved library, Sabah says his thoughts naturally turn to that time when an ideological virus took its deadly toll.

“I still remember the smell of burning books,” recalls the 32-year-old father of two. “After the main library at the University of Mosul was destroyed by airstrikes, Daesh decided to burn all the books in the library to prevent coalition planes from seeing targets on the ground.”

“The Daesh mentality was that anyone who thought differently from them was dangerous, and should be stopped or killed. It was a kind of mind control,” says Sabah, who was prevented from following through with a scholarship to do his masters in mechanical engineering in the U.S. due to the occupation of his city.

As a result, he recounts, all the writers and intellectuals were forced to conform to ISIS’s agenda.

He recalls the tragic story of a primary school teacher who refused to teach the new curriculum dictated by ISIS — one that included weapons training for 9-year-olds as well as extremist ideology.

“She was arrested and killed in the center of Mosul,” says Sabah. Sadly it was one of many such public executions.

But some writers did manage to circumvent ISIS-imposed restrictions. Poet and novelist Abdul Munin al-Amir, the director of the Writers’ Association in Mosul, “wrote one of his best novels during the occupation,” says Sabah. The novel, published after liberation, was called Faraba — inspired by al-Farabi, the renowned 9th century CE Islamic scholar, philosopher, jurist, scientist, and musical expert, who preserved important Greek texts during the Middle Ages, paving the way for the likes of Avicenna and Maimonides.

Employing symbolism and poetry, al-Amir wrote the book in such a way, relates Sabah, “that if any ISIS troops entered his house, they would not understand that the text was about the occupation.”

The plot involved a young girl living with her family in Mosul, whose story symbolized the plight of the city.

Perversely the isolation of the occupation — under which citizens of Mosul were cut off from mobile phones, internet, and other forms of modern communication — encouraged people to read books. With no work apart from joining the ranks of the occupiers and very little in the way of public culture, reading became a form of survival and resistance.

“I read so many books at that time, just like I’m doing now,” recalls Sabah, whose father was a scientist and a poet and filled their family home with literature. “It was the best way to spend the days and nights without work, the best way to escape the bad situation.”

One book in particular, Ali Edwardi’s Waad al Saladin, or “the Sultan’s Preachers,” inspired him to start the Book Forum.

Edwardi, a philosopher and researcher in social sciences, used the book to explore “the problems of Iraqi society, looking back at historical events and how religion has affected politics.”

At home in solitude and in clandestine discussions with friends, Sabah posed key questions, he says, like, “Why did ISIS come to a city like Mosul with so much culture and heritage … what is the main reason they came? One of the reasons was extremism, which was one of the side effects of the 2003 invasion, since occupation breeds extremism, sectarianism, and ultimately civil war.”

“I thought, ‘What can we do to alleviate the miserable situation? How can we solve issues peacefully and non-violently?’”

The answer he deduced was to “work on raising the level of awareness in young people.”

After the liberation, he recounts, the full scale of the destruction was revealed.

Sabah decided to start a book festival, just two months after the end of the occupation by ISIS, to “let the world know we need your help.”

With his university gutted, Sabah and his friends managed to discover 30,000 books inside the library, tucked away in a hidden corner. Sabah and fellow students began to label and document the books. They also started a Facebook page to get people to donate books. Offers poured in from “Basra, from Baghdad, from publishers and individuals,” says Sabah, “and in one month we collected 16,000 books.”

Academic books were given back to the university while the rest were given away to the public at the festival.

“During the festival,” says Sabah, “we invited young people to attend and we said, ‘If you’d like to change the situation here, if you would like to rebuild the library, you have to start by reading books. In this way you will increase your awareness and learn about solutions to social problems — solutions without violence.”

After the initial festival, Sabah teamed up with Harith Yassin, who had run a computer shop during the occupation — where he said he often deliberately didn’t fix computers brought in by members of ISIS — and the two opened the Book Forum.

Last fall, under the auspices of UNESCO’s Revive the Spirit of Mosul program, the Book Forum team organized a cultural festival centered around al-Najafi Street — once the most important place in west Mosul and a center for bookshops, publishing houses, and of course, writers’ cafes. The street was devastated under ISIS’s occupation, bombed by the coalition, and remains a skeleton of its former self. But the festival included an exhibition by young painters and photographers, outdoor film screenings, author signings, and free distribution of books to the public as well as a concert of the sung poetry of Mullah Othman al-Mawsilli, the renowned Moslawi maqam musician, Sufi icon, and writer, whose statue was destroyed by ISIS.

Among the songs performed were Ya maan la’ibat' (“You who have been overpowered”) and Tela’at ya mahla noorha' (“It [the sun] has risen with its beautiful light”).

Shortly after the festival, a new statue of the poet was erected.

While the reconstruction of Mosul — both physically and culturally — remains an ongoing challenge, Sabah and Yassin’s café is a wonderful example of a way forward, one book at a time. And like writers everywhere, Moslawi scribes, already accustomed to lockdown, are making the most of their confinement to produce new works.

Abdel Munim al-Amir is working on a new book based on the diary of a woman in Mosul who tried unsuccessfully to persuade her husband to end his affiliation with ISIS and flee the city. He refused and the whole family ended up dying in coalition airstrikes.

On a more hopeful note, a new anthology of poetry by 16 young women from Mosul who were part of the Book Forum’s writing workshops, entitled Chamomiles of Mosul, will be published this summer in Arabic and English by Kuala Lumpur-based JF Publishing.

While the situation in Mosul is far from easy, says Sabah, “We are trying to collect the jewels from the ashes.”