The Multinational Force of Observers and the Sinai Storm 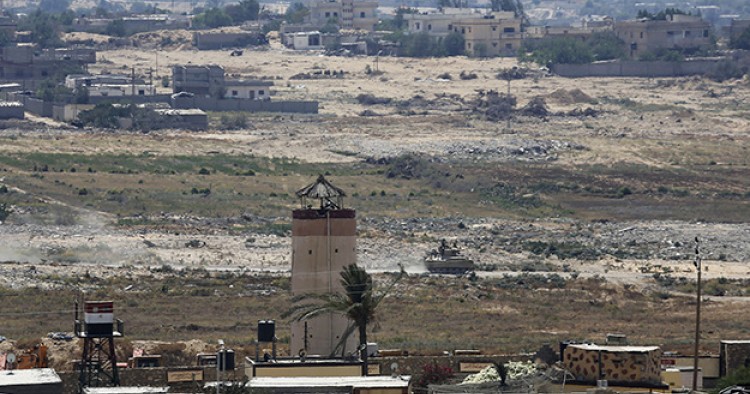 The 1,667-strong contingent of U.S. and international forces that make up the Multinational Force of Observers (MFO) in Egypt’s Sinai Peninsula is in a tough spot. The ongoing failure of the Egyptian government's war against the ISIS-led rebellion there has shredded the MFO's mandate to monitor Egyptian and Israeli adherence to their peace treaty. Sinai's descent into anarchy also puts outnumbered and outgunned U.S. troops in the only location other than Iraq that confronts ISIS in an active theater of war.

This is not what the United States signed up for when in 1979 the Carter administration, together with treaty signatories Egypt and Israel, laid the foundation for the 1981 establishment of the MFO. The MFO is not a peacekeeping force, but rather an all-but-unarmed peace-observing force. As such, it reflects rather than enforces the absence of conflict between Israel and Egypt. The MFO is meant to monitor the adherence of both parties to their deployment and limitation of forces commitments in and around Sinai, which had served as the primary theater of military operations in both the June 1967 and October 1973 wars.

The MFO is formally tasked to:

The MFO represents an era defined by successful U.S.-led peacemaking between Egypt and Israel. With minor exceptions, the parties remained committed to maintaining their treaty obligations. Sinai became a symbol of a new pacific era.

That era has ended. The MFO was built to monitor a peace that now exists in an entirely different environment and on terms that contradict key concerns that prompted the organization's creation in the first place.

As David Satterfield, director general of the MFO, wrote recently, “The security situation in the Sinai brings the parties and the MFO together to face conditions beyond the contemplation of the drafters of the Treaty of Peace and the 1981 Protocol establishing the MFO.”

Two dramatic changes over the past 10 years have undermined the original rationale for the MFO's creation and have called into question its continuing relevance. The first was Israel’s 2005 "redeployment" from the Gaza Strip, when it evacuated all settlers and permanently stationed troops. As part of the move Israel agreed to permit Egypt to deploy for the first time 750 regular army forces—renamed "border guards"—along the Sinai-Gaza border. An MOU between Israel and Egypt specified the type of equipment—small arms, jeeps, and no heavy armor—permitted for use by Egypt. The 2005 MOU was technically a violation of the treaty, albeit an agreed-upon one.

Having established this precedent, when civil unrest exploded in Sinai after January 2011, Egypt and Israel—both opposed to the loss of central control over governance and security there—agreed on an ad hoc basis to a series of Egyptian military actions in Sinai. Apache helicopters, attack aircraft, and thousands of regular army troops have been deployed to Sinai in recent years. As a result, for the first time since the October 1973 war, Egyptian heavy armor and combat aircraft are being used east of Suez in what has so far been a bloody but failed effort to restore order and uncontested central government authority.

In September 2012, dozens of gunmen in 50 vehicles breached the perimeter defenses at North Camp—the MFO headquarters 25 miles south of el-Arish. Armed elements fired on and ultimately destroyed two guard towers before Egyptian forces intervened. MFO forces did not fire on the attackers, a difficult decision that proved to be operationally as well as politically correct in that if the MFO had fired it would have joined the battle as a participant, thus complicating its role. In January 2014 militants shot down an Egyptian military helicopter near the town of Sheikh Zuwaid in North Sinai, and in July 2015 ISIS fighters briefly occupied the town before they were dislodged by Egyptian forces. Scores were killed.

These developments and others like them have transformed the environment in which the MFO operates. How can the MFO do its job—that is, monitor compliance with the force limitations outlined in the treaty—when force protection, hardly considered for most of its mandate, has emerged as the MFO's most central mission, and when Egypt and Israel have agreed that the treaty’s violation is essential to national security—an action applauded by Washington?

The most recent MFO annual report explains that “the changed security environment in the Sinai following a series of terrorist attacks...impacted the MFO mission, requiring operational changes and measures to promote the safety of our personnel.”

The MFO budget remained in the range of $60 million annually from 1991 to 2006. Beginning in 2007, when security conditions started to worsen, costs began to climb; they now reach more than $80 million annually. The United States provides 31.3 percent of the operating budget, matched by Israel and Egypt. The remaining 6 percent is provided by donor nations. Since 2008 a special off-budget Force Protection Fund of approximately $5 million, over 90 percent of which is funded by the United States, has paid for necessary security improvements in MFO infrastructure. In addition, the U.S. Army has transferred at no cost to the MFO armored equipment to replace unarmed and insecure vehicles for all travel.

Evidence of the worsening situation in Sinai is not hard to find. Every six weeks the North Camp rehearses its emergency response plan. Maintaining emergency fuel and foodstuff in adequate quantities continues to be a challenge, forcing American policymakers to pay attention. Testifying on Capitol Hill last month, Gen. Martin Dempsey, chair of the Joint Chiefs of Staff, said the Pentagon recently installed counter-mortar radars and better communication equipment for the force to deal with threats. He noted, “I fully expect that threat to increase.”

In addition, State Department Spokesperson Mark Toner told the AP recently that “the U.S. is concerned over deteriorating security conditions in an area of northeastern Sinai where Egyptian security forces as well as civilian and military elements of the MFO, including the U.S. military forces stationed at the MFO North Camp, are exposed to potential risk.” And the AP reported that the Obama administration has been “quietly” conducting an “inter-agency review” of the MFO, “fearful [that] the lightly equipped peacekeepers could be targets of escalating Islamic State-inspired violence.”

Despite these moves to beef up the MFO, the force’s main contribution has never been what it does, but rather what it represents—a tangible American and allied commitment to an active and commanding U.S. presence in a peaceful resolution of the Arab-Israel conflict. The Obama administration, like its predecessors, and its Egyptian and Israeli allies, are understandably loath to surrender this posture. All prefer to plan for the worst and hope for the best. By doing so, however, Washington risks engaging ISIS on the organization's turf—chancing not simply a bloody repudiation of an outdated policy success but also creating a costly precedent in the complex and violent era now emerging throughout the region.