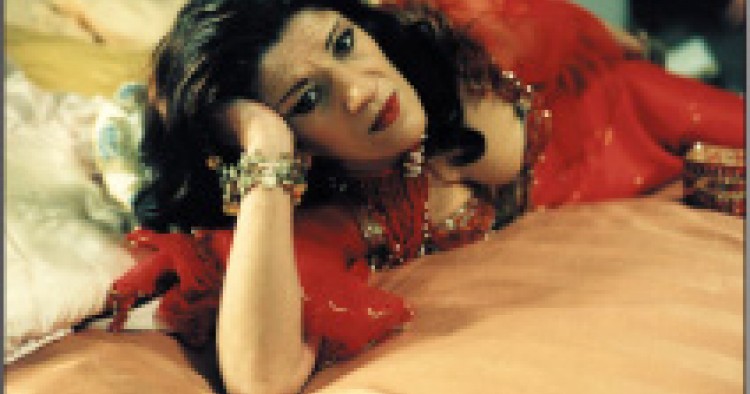 In her book Harem: The World behind the Veil, Alev Lytle Croutier proposes the following definition of the harem: “The word harem, derived from the Arabic haram, means ‘unlawful’, ‘protected’ or ‘forbidden.’ The sacred area around Mecca and Medina is haram, closed to all but the Faithful. In its secular use, harem refers to the separate, protected part of a household where women, children, and servants live in maximum seclusion and privacy … It is a place in a noble and rich house, guarded by eunuch slaves, where the lord of the manor keeps his wives and concubines.”[1] While discussing different representations of female communities in Algiers in Nadir Moknèche’s[2] trilogy The Harem of Madame Osmane (2000), Viva Laldjérie (2004), and Délice Paloma (2007), one should approach the word “harem” figuratively, as a space of confinement and liberation, withdrawal and solidarity. The filmmaker recurrently uses the figure of the harem to structure the relationships between female characters, to depict the intimacy of their interactions, and emphasize the more or less private sphere in which they evolve and through which they conquer the public arena.

My brief discussion of the harem representations in Moknèche’s films consists of two arguments. The first emphasizes the opposition between the reductive representation of the historical/colonial/traditional harem on the one hand, and the modern image of women groupings viewed — metonymically — as “harems,” on the other. The cinematic harem becomes a spatial token that opposes and reconciles the old traditions and the aspirations of specific categories of modern Algerian women: an old combatant of the Algerian resistance and her daughter in Le Harem de Madame Osmane, a former dancer and her daughter in Viva Ladjérie, and a mafia lady and her daughter-like protégées in Délice Paloma. Far from being rejected by women, the harem is conceived of, and perceived as, a space of female solidarity and empowerment, and as a space of initiation, given the recurrent mother-daughter clusters depicted in the trilogy.

The second argument examines the de-romanticized representation of the harem as the cultural allegory of a de-romanticized “homeland” viewed through the Diasporic gaze of the Algerian-French filmmaker. While most Arab and Middle Eastern filmmakers of the Diaspora tend to perpetuate the cliché of the feminized homeland, Moknèche problematizes the relationship between woman and land by territorializing it outside of the patriotic discourses; therefore, the relationship is never taken for granted. The woman/homeland dichotomy is tightly intertwined with the colonial/post-colonial duality, where the encounter of odds (homeland and hostland) and the reconciliation of extremes (colonial past and national present) seem to be possible, thanks to the diasporic gaze.

Evidently, the filmmaker wishes to create (or re-identify) his own “Laldjérie,” a mixture of the French name Algeria and the Arab one, Al-Djazaer. He also re-appropriates the Orientalist gaze as a component of his particularly mixed identity, namely through the mise en scène of an Orientalist-like episode in Viva Laldjérie, where Goucem, the daughter, seeks the help of a fortune-teller, a character coming out of a painting by Delacroix or Gérôme. Correlatively, the filmmaker presents a completely demystified vision of the modern Algerian woman, especially in the last film, Délice Paloma, where his fetish actress Biyouna plays the role of a mafia lady called Madame Aldjérie who is obsessed with only one dream: buying the old Thermes of Caracalla. A similar situation is seen in Viva Laldjérie where the main character, Papicha (also played by Biyouna) is determined to find and purchase the cabaret where she used to dance, the Copacabana, which has closed under Islamist pressure. In fact, Biyouna’s sense of irreverence and vulnerability is key to the popular success of Moknèche’s movies outside of Algeria.

The harem representation is deterritorialized, equally dissociated from its historical and Orientalist backgrounds. One way of destabilizing this image is to subvert the power relationships between men and women on one hand, and between female masters and female servants on the other hand. In Moknèche’s harem, female characters live, dwell, and work on the margins of the masculine realm. The quasi-absence of male central characters is obviously an aesthetic choice as well as a political statement: the absent husband in The Harem of Madame Osmane, the dead father in Viva Laldjérie, the unknown Italian lover and the unfaithful husband (owner of a cinema playhouse) in Délice Paloma are deliberately stereotyped in order to emphasize the negation — even the neutralization — of the harem’s exclusive function as a space for hedonistic pleasures where the “lord” keeps his wives and concubines in maximum seclusion. And while Moknèche keeps the father’s figure at bay, he de-romanticizes the harem by excluding the erotic fantasies of male exclusivity in the traditional house of happiness (aka the Turkish seraglio). The non-exclusive sexual relationships depicted in Viva Laldjérie and Délice Paloma subvert the traditional representation of the harem, since major female characters in both movies openly seek sexual liberation, facing social reprobation and religious furies. 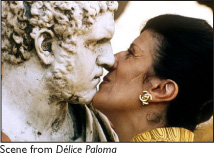 Power relations between female masters and servants are also deconstructed. Meriem the servant in The Harem of Madame Osmane regularly transgresses the rules of obedience, reversing the power relationship with the landlady by simply ignoring her orders or by singing to maintain a certain distance with her master. In one of the most powerful scenes of the film, the middle class landlady gives her maid a bath, and while the maid is singing and enjoying the bath, the lady is weeping over the death of her own daughter, which occurred when the daughter defied a curfew. Papicha in Viva Laldjérie condemns the sexual liberation of her own daughter, and overtly antagonizes her neighbor, Fifi the prostitute, but without imposing any rules nor limits on her relationship with either of them. It is actually the daughter who imposes her rules on the mother, empowered by the fact that she works while the mother does not. Finally, the unscrupulous Madame Aldjérie in Délice Paloma exploits her “girls” to gain power over men, and consequently to insure her/their future as the potential owner(s) of the public baths of Caracalla. The opening of the movie shows her coming out of prison, meeting with her closest associate (now married and veiled), and, with her deaf sister, asking them both to come back to work for her and facing their stubborn refusal and their disdain. 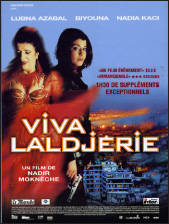 The cinematic harem is saturated with self-empowerment and resistance against all forms of dominance, male or female, but also against religious fundamentalism and the bourgeois moral system (denouncing this system for its coward positions during the years of terror, as in the wedding procession in Viva Laldjérie, when rich, fur-covered women deliberately deliver Fifi the prostitute to the national security agents who kill her). The three movies pay homage to today’s new women fighters of Algiers, middle class combatants, seasonal workers, dancers, singers, and even prostitutes, some of which are representatives of female resistance against the establishment, the institution of family, and marriage, while some others are ultimately witnesses of prejudices about sexuality and sexual liberation, such as those which confuse female sexual appetite with prostitution or deviance.

The cinematic harem has open doors, and its inhabitants are subject to the voyeuristic, imaginative gaze of the filmmaker. Yet this voyeuristic gaze does not reflect a documentary preoccupation. The purpose of making an authentic representation of women’s space does not operate in cinema like it used to in Orientalist painting or in colonialist photography. In Malek Alloula’s major book The Colonial Harem, imprisoned women are eroticized and fantasized, but what their imprisonment reveals, argues the author, is mainly the sexual frustration of the photographer, not that of the photographed. The old harem is represented in colonial photography as well as in Orientalist cinematography as a community of faceless women, seriality and servility being two faces of the same coin. Images of women in the harem are often the serial representation of a typically seductive, passive, lusty, faceless woman. In Moknèche’s movies, female characters are individualized, differentiated. But they are also considered disreputable and immoral because they choose to live outside of the traditional family institution. And since male authoritative figures are absent from his narratives, the only choice left to female characters is to operate in the margins, as humble middle class house owners, dancers, singers, prostitutes, small mafia gangsters, and the like. These characters are therefore depicted as strong, ambitious, cunning, intransigent, and even cruel women, especially in relation to other women, in the exclusively feminine environment where solidarity and wickedness rime perfectly well and enjoy some sort of consensus.

The Diasporic gaze as we have seen in Moknèche’s trilogy uncovers the shifting values and social transformations of Algiers, in terms of space representation, class oppositions, gender discrimination, and political oppression, challenging the prevailing social and religious conservatism as well as the nationalist predominant discourses. Like North African filmmakers of the Diaspora, mainly in France, Moknèche explores different aspects of his transnational identity by focusing on two fundamental leitmotivs: the investigation of contemporary history (the aftermath of the years of terror) and the denunciation of socio-religious conservatism and prejudices. Each aspect is explicitly or implicitly illustrated either to provoke the homeland audiences and challenge their self-indulgent representations or to attract the attention of the hostland audiences to the rapid social transformations in post-independence North African societies. He deconstructs the images Algerian people and filmmakers are keen to portray of themselves, and suggests a more complex and less apologetically constructed portrayal of his homeland.

In an interview with French-Algerian historian Benjamin Stora, Nadir Moknèche notes: “Algerians have a tricky relationship with images, their image. They started by seeing themselves through the colonial eye, a mass of undifferentiated people, then when independence came, as social realist archetypes: the Combatant, the Farmer, the Worker. Never as individuals with their own personality … Since its independence, Algiers has practically not been depicted, a city always lacking contemporary images of itself. The reference self-portrait remains colonial or folkloric.”[3] 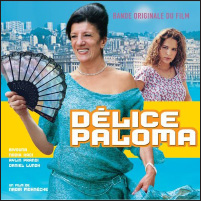 The historical component is therefore a primary concern, investigating the colonial past and the post-colonial present of the city through the dichotomy of the old quasbah and the modern colonial city facing the sea, and through the depiction of the years of terrorist upheaval and their impact on city life, and on women in particular. The religious aspect is subtly criticized in his films, where manifestations and repercussions of fundamentalism as well as the struggle for secularization are omnipresent. For the filmmaker views himself and his female characters -his alter-egos- as rebels with a cause, introducing a new and fresh image of Algerian urban society today, not as an undivided whole, but as an individuated cinematic space, propitious for mutiny.

[2]. Nadir Moknèche is a French-Algerian director. He was born in Paris in 1965, and lived in Algiers most of his childhood and his adolescence. He went back to Paris in 1984, where he studied theatre and cinema. He then traveled to London and New York and came back to France where he worked for the famous playwright Ariane Mouchkine. In 2000, he signed his first long feature, Le Harem de Madame Osmane, co-produced by France and shot in Algiers. Viva Laldjérie is his second long feature, co-produced by France and Belgium, shot in Algiers and acclaimed in many international film festivals. The famous Algerian comedian Biyouna (the servant in Le Harem and the mother in Viva Laldjérie) appears in his third film, Delice Paloma (2007), in the role of a mafia lady called Madame Aldjérie.