The Necessity of Karez Water Systems in Balochistan 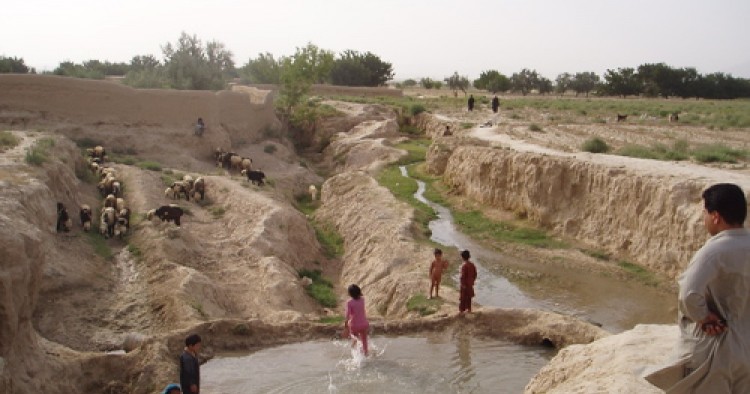 Land is infinite in Balochistan. It is the one place in South Asia where if you ask someone how much land they have, they will generally have no idea. Instead, it is water that matters. In Balochistan, social station is not determined by landholdings but by the size of one’s share of water in a karez. These manmade underground channels passively tap groundwater and provide the lifeblood of villages at the valley floor.

The most arid of the provinces in largely semi-arid Pakistan, Balochistan has the highest poverty rate in the country, and more than 70 percent of its population is spread across the vastness of its uplands and plains. Most of the rural population can be characterized as pastoralist and agro-pastoralist, with a rising cohort of sedentary agriculturists colonizing the valley floors in the province’s uplands and one major canal colony in the eastern lowlands. Groundwater is vital to agro-pastoralist and sedentary agriculture, and for more than a millennium the linchpin of groundwater tapping technology in Balochistan has been the karez system. 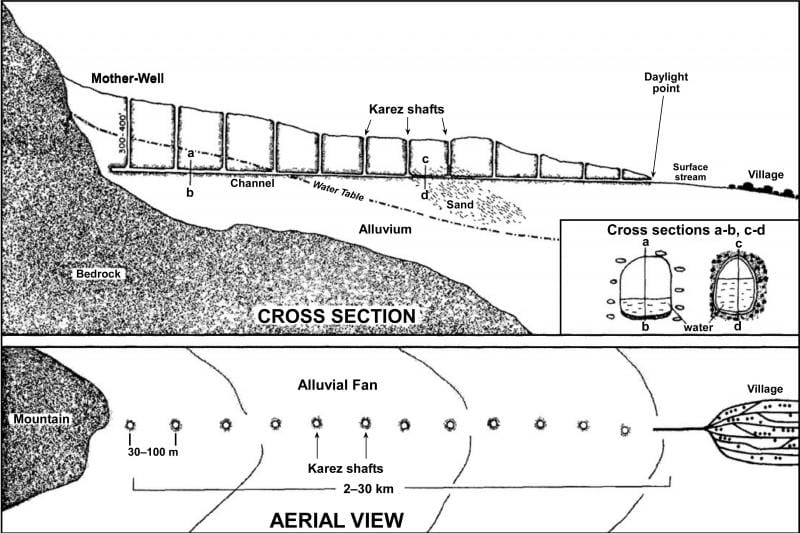 The first well where the water is tapped for a karez is called the mother well, and there is a zone of roughly 1,200 feet in diameter where it is forbidden to dig new wells or otherwise threaten the quality and quantity of the groundwater. The vertical shafts along the underground channel are purely for maintenance purposes, and water may only be used once it emerges from the daylight point.

The key advantage of the karez system is that it taps the water passively and therefore does not contribute to groundwater depletion, though the downside is the ensuing dependence on seasonal water flow fluctuations. These structures are found all over West Asia, Central Asia, North Africa, Spain, and even as far as Peru, Mexico, and Japan. Many of the karezes in Balochistan are hundreds of years old, and although they are generally not as architecturally ornate as those in neighboring Iran, they carry equal, if not greater, import in the economic and cultural life of the region.

The Soviets understood the importance of karezes in the 1980s and were thorough about destroying them in Kandahar and southern Afghanistan in an effort to break the insurgency. The historical importance of karezes stretches back far before the 1980s, however. Karezes in Kandahar were used to water the vineyards that produced wine that Babur—the first Mughal emperor of India—eagerly awaited in the sixteenth century, on the plains of Bhera in northern Punjab, where Alexander the Great had also made camp during his Indian campaign.

Karezes are not just irrigation structures, but are also the bond that holds together the social, economic, and cultural life of the communities in which they are located.  Karez water is perpetually flowing and is divided into 24-hour cycles called shabanas. A karez, depending upon its size, may have anywhere from 18 to 32 shabanas distributed between its shareholders, with individual claims ranging from the right to a few minutes to a week of water. But even if one has the right to only a few minutes of water from a karez, a shareholder, or shareeq, is entitled to the standing of a country gentleman in the community and may sit in a jirga and weigh in on collective decisions. As such, the lack of a right to karez water renders one a second-class citizen in the village communities of Balochistan.

As karezes require considerable social organization for their maintenance, strong social capital undergirds the system. Universally recognized water rights have given rise to well-articulated water markets, in which water is frequently exchanged either on a reciprocal basis or for cash to direct it toward its most productive or socially desirable use. Karez communities also often hold 24 hours of water in reserve to be auctioned at the beginning of every planting season to finance karez maintenance. These water rights can return up to Rs. 3000 (roughly $28.44) per hour.

The administration of water rights and the mobilization of labor and resources for karezes’ periodic maintenance is typically presided over by the institution of the mir-e-aab (water master), who levies maintenance charges, resolves disputes, and maintains accounts. The office of the mir-e-aab is generally separate from the village head, and the position is not necessarily hereditary. Furthermore, the mir-e-aab presides over a water management committee and is not an absolute leader.

For the past 30 years, the Pakistani government and assorted donors have been promoting electric and diesel tubewells in an effort to modernize the agricultural sector. Tubewell water is attractive because it is available on demand and is a modern invention. However, tubewells and electricity to run them present a major drain on the financial resources of their owners. Tubewells are also the main cause of depletion of groundwater; indeed, levels are dropping at alarming rates in Balochistan, particularly in the Quetta, Mastung, and Pishin districts. Beyond the imminent environmental catastrophe that awaits Balochistan are the social consequences of this state-sponsored rush toward modern tubewells. With the dropping of the water table, and with the introduction of every tubewell, dozens of karezes go dry. As one of my research respondents noted: “A tubewell is owned by an individual, [and] two or three people are earning their living [from it], but a karez is communally owned, [and] 500-1000 people may be earning their living [from it].”

The main beneficiaries of the replacement of karezes with electric tubewells in Balochistan have been the large farmers. The biggest losers have been the small farmers, pastoralists, and agro-pastoralists who have been deprived of their customary rights to water from karezes. Although the agricultural productivity in Balochistan has increased with the surge in water availability from tubewells, that surge is likely to be temporary because the water is being pumped unsustainably.

The poor lose not only their livelihoods but also their sense of pride and dignity. While routine karez management and maintenance procedures kept the rural communities together through strong communal involvement, the drying of karezes strains those bonds. Country gentlemen, even those of modest means under a karez system, have been reduced to working as day laborers or street hawkers in the slums of Quetta and Karachi. The youngest segments of the population fare even worse under such circumstances.

Saving these karezes from extinction will be one of the keys to restoring peace and dignity to the rural poor of Balochistan. The depletion of groundwater as it is currently happening will spell doom for that province, both socially and environmentally. The number of functioning karezes in the Quetta valley has been reduced from scores to barely one or two. In the neighboring Mastung valley in the 1970s, there were 365 karezes; now there remain barely a dozen.

In Balochistan there has been a general feeling of doom about the future of karezes. As one of my interview respondents observed:

“Karezes were a great source of social and communal life for us village folks.  People would sit on their sides and discuss their issues and find solutions to their problems.  But modern times, new technologies, and tubewells have dried out the karezes and their resurrection is no longer possible, nor is there any future for the existing ones.”

Or as another respondent remarked:

“Times have changed. New technology is coming in, with new machines, and new [modern] people who like [the] latest machines.  The traditional irrigation is being progressively forgotten.”

In Syria, too, there was once a thriving karez system, locally referred to as qanats. Qanats were replaced with tubewells from the 1970s through the 1990s, which resulted in a spectacular growth of agricultural productivity. But, by the mid-2000s, the groundwater had been depleted. The resultant rural dispossession and economic devastation had socially disastrous results for Syrian society. While one cannot say that the present-day civil war is a direct consequence of qanat decline, one cannot say that the decline was entirely irrelevant, either.

In some countries, however, attempts are being made at restoring karezes. In the Nakhchivan region of Azerbaijan, some karezes are coming back into use after more than 70 years of dormancy. The tubewells had done to this region what they did to Syria and are now doing to Balochistan.

Dare one even speculate what might happen in Balochistan when groundwater disappears at present extraction rates and the rural economy collapses? The news is not good at the time of this writing. Hopefully attention to the karez system and the lives that it sustains can keep the situation from deteriorating.