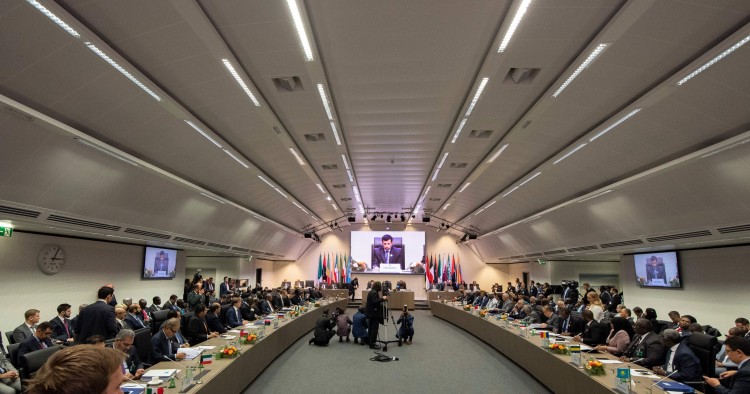 OPEC and Russia-led non-OPEC members agreed last week to trim their collective oil production by 1.2 million barrels per day (bpd), pushing prices down to their lowest levels of the year.

Brent crude rebounded by 3.4 percent the next day, then slid again.

Saudi Arabia shouldered most of the production cuts on the OPEC side. It was another sign to Riyadh that a changing world market threatens to continue weakening its ability to control oil prices and maintain its market share.

The Saudis and Russia, the largest producers in the OPEC+ club, had pledged to accept curbs, but before the gathering had not agreed on how much. Russia had wanted no more than 150,000 bpd, for example.

Iran insisted on being exempted from the reductions because of U.S. sanctions, which have prompted many countries to avoid its crude. In early December the U.S. State Department said sanctions had slashed Iran's exports by two-thirds since May—from 2.4 million bpd to 800,000.

In a pre-OPEC-meeting tweet, Donald Trump demanded that the cartel keep prices low. This put even more international pressure on Saudi Arabia, OPEC’s leader, which is dealing with worldwide condemnation over the murder of journalist Jamal Khashoggi.

The dilemma Riyadh faced was trying to maintain an OPEC+ production-cut agreement while assuaging Trump at a time when Washington was sticking with the Saudis amid the fallout from the Khashoggi case.

Russian Energy Minister Alexander Novak played an important role in hammering out the deal, shuttling between the Saudi and Iranian energy ministers to try to bridge their positions. Novak also shuttled between Vienna, where the OPEC meeting was held, and Moscow to obtain Russian President Vladimir Putin’s approval of production-cut figures.

In the end, Saudi Arabia swallowed the largest share of the OPEC cuts of 800,000 bpd. Non-OPEC members agreed to a reduction of 400,000 bpd. Iran, Iraq, and Venezuela obtained quota exemptions.

The last OPEC meeting of 2018 was momentous for other reasons as well. One was that Qatar ended its longtime membership in the group. Although it accounts for a minuscule share of OPEC production, its decision further threatened the cartel’s already shaky unity.

Meanwhile, OPEC received the bad news that the United States had become a net exporter of oil for the first time in seven decades—a sign that fundamental shifts in the market were accelerating.

Another surprising development was Saudi Energy Minister Khalid al-Falih’s public criticism of French President Emmanuel Macron’s decision to raise domestic fuel prices—a move that triggered riots in Paris. In the same vein, al-Falih called on oil-consuming countries to stop adopting policies to reduce demand for conventional fuel as a way of fostering renewables. It was the first time Riyadh had tried to interfere in consuming countries’ internal fuel policies — an indication of how concerned it is about future oil demand.

Saudi Arabia made several concessions to achieve a production-cut deal. It opposed the exemption of its archrival Iran from the cuts, but finally agreed, hoping that U.S. sanctions will continue crippling Iran’s exports. The problem is that China and India both obtained sanctions waivers and began buying Iranian oil again in November.

Riyadh appears to be hoping it can grab some of the business Iran loses to U.S. sanctions. A hint was that al-Falih discussed the sanctions with Brian Hook, the U.S. State Department’s special representative for Iran, a day before OPEC+ made a decision on production cuts.

The agreement is for six months. OPEC+ members will discuss production levels again in April 2019.

The deck appears to be stacked against the Saudis being able to maintain their market share by extending the current deal. Weighing against it is record production from the United States, Russia, and Iraq, and output that has begun stabilizing in troubled countries such as Libya and Venezuela. It truly is a new ball game in the oil market for the Saudis—and the world.