From Nonintervention to What?: Analyzing the Change in China’s Middle East Policy 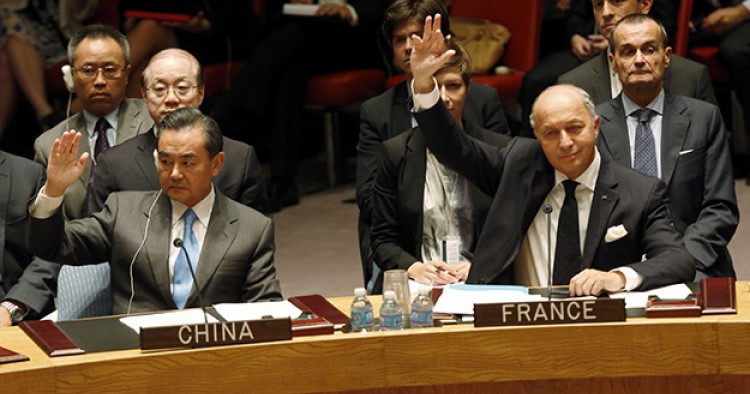 Since 2011, China has joined with the Russian Federation in vetoing United Nations Security Council (UNSC) draft resolutions[1] concerning Syria, provoking fierce criticism.[2] Immediately after China cast the first such veto (on draft S/2012/77), then-U.S. Ambassador to the United Nations Susan Rice remarked that “the United States was disgusted that a couple of members of this Council continue to prevent us from fulfilling our sole purpose here.”[3] Responding to the harsh criticism, China’s Permanent Representative to the United Nations Li Baodong justified the decision, stating that “we must strictly observe the purposes and principles of the UN Charter and the basic norms governing international relations, and respect the sovereignty, independence, unity and territorial integrity of the countries in the region.”[4]

China has acted as a staunch supporter of state sovereignty as the foundational principle of international relations for the past 30 years.[5] Thus the position that China has taken on Syria is not new. Nor is the stated rationale for doing so. Writing in The Diplomat, Adrien Morin, echoing the views of a wide range of other scholars, argued that “in the Syrian crisis China has followed a consistent foreign policy, in line with its principles and traditions…which is articulated in the Five Principles of Peaceful Coexistence.”[6]

However, this point might be misunderstood. Though China still adheres to the principle of nonintervention, its unprecedented proactivity and break from its position to “pursue friendly, cooperative relations with all Middle Eastern countries” has already distinguished its behavior in this crisis from its traditional stance.[7] According to Muhamad Olimat, “China has always opposed Western intervention in the Arab World, but was never as aggressive as it has been over the past year with respect to the Syrian crisis.”[8]

On February 4, 2012, China joined with Russia to veto UNSC draft resolution S/2012/77, tabled by Morocco, which would have expressed grave concern about the deteriorating situation in Syria and condemned the widespread violation of human rights and “all violence, irrespective of where it comes from,” while demanding that the Syrian government implement “without delay” the elements of a plan set out by the League of Arab States.[9] Only 24 hours later, a delegation from the Syrian National Committee for Democratic Change visited Beijing at the invitation of the Foreign Ministry to meet with Zhai Jun, vice foreign minister on Africa and West Asia.[10] Shortly thereafter, China also dispatched senior delegations to Syria, Egypt, Saudi Arabia, Qatar, Iran, Jordan, Israel, and Palestine for diplomatic consultations regarding an alternative to the military option.[11] In addition to these diplomatic efforts, China has also become more assertive militarily by sending Chinese warships to the Mediterranean Sea in a “show of flags” along with the Russian naval presence near Syria.[12] These moves break with China’s traditional stance, which is characterized as risk-averse and driven by a strong desire to avoid entanglement in the internal affairs of regional states.[13]

How then should we conceptualize this change? Scholars such as Degang Sun and Yahia Zoubir describe it as a shift “from nonintervention towards constructive intervention.”[14] Chengqiu Wu, a scholar from Fudan University, described this change as a process toward internalizing the norm of “responsibility to protect.”[15] Others, such as Michael Swaine,  regard the change as an element of the broader emergence of “a new assertive China.”[16]

However, if China has fundamentally altered its behavior in recent years and has thus become “a new assertive China,” what explains its low-profile role in cases such as the 2003 Iraq War? Additionally, what explains its unflinching declaratory policy of upholding the norm of nonintervention? And if China has indeed gradually internalized the “responsibility to protect” as an international norm, why then did it veto the draft resolution authorizing the possible use of force to protect innocent Syrian civilians?

To understand this change and China’s interaction with the principle of nonintervention, it is worth comparing China’s involvement in different regional crises during and prior to this past decade. In recent years, China has been confronted with three major crises in the Middle East: the 2003 Iraq War, the 2011 Libya crisis, and the 2012 Syrian Civil War. A decade ago, China’s position toward the Middle East, deeply rooted in its quest for oil, was characterized as taoguang yanghui, which can be interpreted as “doing nothing.” Over the past ten years, a new Chinese diplomatic strategy, guided by the aim of “making more of a contribution to the world” (you suo zuo wei) has gradually taken shape. However, this path is not consistent.

During the 2003 Iraq War, seven resolutions, from November 2002 to November 2003, were adopted by the Security Council. Two of these (S/2002/1441 and S/2003/1511) were specifically related to the principle of nonintervention. While China voted for all of them, statements by China’s representatives during the meetings indicated that China did not fully endorse the final text of S/2003/1511 regarding the use of force. As indicated by then-Permanent Representative to the UN Wang Guangya’s speech, “the fact we voted in favor of the resolution does not mean that we are fully satisfied with its content.”[17] Nevertheless, China was reluctant to become involved in the conflict and thus acted passively. Chinese officials repeatedly called for the implementation of a political solution and peaceful settlement, but never mounted serious opposition to the U.S.-led military invasion. As Yitzhak Schichor commented:

While paying lip service to the principle of settling conflicts peacefully, China had hardly lifted a finger to enable a peaceful settlement and had ultimately gone along with the U.S.-led coalition’s offensive, either within the UN framework or without.[18]

In the Syrian case, things were different. From November 2011 to September 2013, seven UNSC draft resolutions were tabled to deal with the crisis, and China voted against three of them. The four resolutions China voted for are resolution 2042(2012), 2043(2012), 2059(2012), and 2118(2013). Resolution 2042(2012) and 2043(2012) were related to the implementation of then-UN Special Envoy Kofi Annan’s Six-Point Plan and authorized the deployment of monitors to oversee the ceasefire. What should be noticed from these two resolutions is that neither of them contains language authorizing or threatening the use of force or the imposition of sanctions. Instead, Annan’s plan emphasized the need to initiate an “inclusive Syrian-led political process.”[19] This specific difference reflected China’s position toward the principle of nonintervention.

From Beijing’s perspective, adherence to the principle of nonintervention is not synonymous with inaction. Nor does it preclude the United Nations from acting. As stated in Article 2.7 of the UN Charter, the principle of nonintervention “shall not prejudice the application of enforcement measures under Chapter VII,” which authorizes the Security Council to determine the “existence of any threat to the peace, breach of the peace, or act of aggression and shall decide what measures be taken to maintain or restore international peace and security.”[20] As can be read from China’s involvement in both the Iraq and Syrian cases, China is willing to undertake responsibility as long as the process of intervening is legitimate, that is, as long as it satisfies the requirements set forth in the relevant passages of the UN Charter. Therefore, China’s vote for the use of force in the Iraq case did not constitute a deviation from its commitment to the principle of nonintervention. In the Syrian case, while having vetoed three resolutions that included the imposition of sanctions, China has nonetheless been very active and willing to take responsibility to help resolve the crisis.

Compared with the 1990s, China has generally begun to play a more active role in the Middle East. However, this pattern is not uncontroversial. By comparing the Iraq and Syrian cases, we can see that there are variations within this general pattern of a more active China. Due to these variations, we cannot conclude that China has abandoned the principle of nonintervention and internalized the international norm of “responsibility to protect.” However, its position toward this “norm-building project” as well as toward the principle of nonintervention is gradually changing.

It is becoming harder to rule out the influence of the increasing strategic and economic importance of the Middle East to China and argue for China’s diplomatic paradigm as idealpolitik. It is safer to say that China is adapting its behavior, balancing the normative consideration of the responsibility to protect and its tangible interests in the region. Clearly, adaptation has led to some positive change in China’s behavior toward the Middle East, including its proactivity in the recent crises, the appointment of a permanent Middle East envoy in 2002, and the establishment of the Chinese-GCC Forum in 2003 and the Chinese-Arab Forum in 2004.[21] Based on this adaptation model, one can expect that in the near future China will seek to project its influence and become more engaged in the Middle East. However, given the Middle East’s economic and strategic importance to China, it is unrealistic to expect a fundamental shift in Beijing’s Middle East policy or in its approach to regional crises via the United Nations any time soon. Instead, for the foreseeable future we can expect China to continue the practice, on a case-by-case basis, of seeking to balance national interests and norm considerations.

[5] A. Carlson, “Moving Beyond Sovereignty? A Brief Consideration of Recent Changes in China’s Approach to International Order and the Emergence of the tianxia Concept,” Journal of Contemporary China (October 2014): 37–41.

[10] Sun, “Syria: What China has Learned from Its Libya Experience.”

[11] Sun, “Syria: What China has Learned from Its Libya Experience.”

[19] This is the first point of Annan’s Six-Point Plan.