Oman and Israel: The emergence of a new strategic partnership 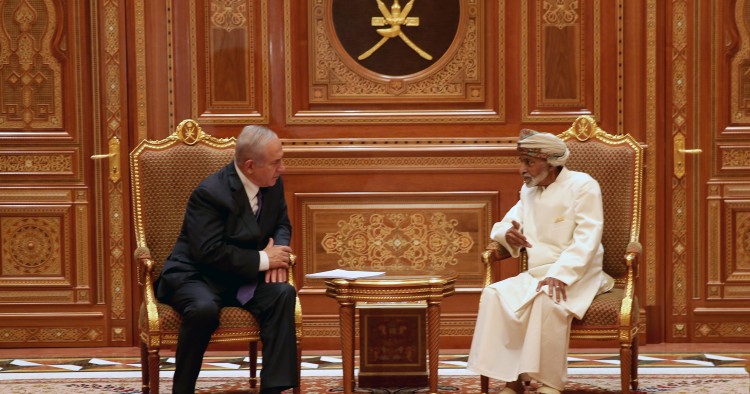 On Oct. 27, the Sultanate of Oman made headlines when Omani Minister of Foreign Affairs Yusuf bin Alawi bin Abdullah called on its neighbors in the Gulf Cooperation Council (GCC) to recognize Israel. These comments came a day after a surprise visit by Israeli Prime Minister Benjamin Netanyahu to Oman –– the first of its kind in over two decades. Netanyahu’s warm welcome by Sultan Qaboos bin Said demonstrates the emergence of a new alliance that reflects Omani and Israeli strategic interests. In the aftermath of Saudi journalist Jamal Khashoggi’s murder, Oman offers Israel an alternate gateway to the Gulf by relying on its historic reputation as a regional mediator––a role that affords the sultanate important international leverage.

Oman’s recognition of Israel highlights a growing thaw between Israel and the Gulf states, one which has been carefully cultivated by Israel over the past few years. A joint statement issued by both countries suggests that the visit’s goal involved the achievement of “peace and stability in the Middle East.” For Israel, however, the primary objective was further public engagement with––and acceptance by––the Gulf Arab states to thwart the perceived threat from Iran and other Shi’a proxies, such as Hezbollah. Further regional cooperation would also enable Israel to tap into regional demand for advanced cybersecurity and military technology. In his speech in Oman on Nov. 7, Intelligence and Transportation Minister Israel Katz pushed for a rail link––termed “tracks of regional peace”––to increase trade relations by connecting Israel with the Gulf.

Israeli officials’ visits to Oman demonstrate a revaluation of regional actors’ strategic capabilities. In the aftermath of the Khashoggi murder and the resulting question marks over Mohammed bin Salman’s international standing, Israeli reliance on Saudi Arabia appears to have shifted to Oman––at least in the public domain. Behind the scenes, the kingdom continues to dictate the Trump-supported Gulf-Israeli rapprochement; it is unlikely that the visit to Oman would have been possible without Saudi Arabia’s blessing. Cognizant of Saudi Arabia’s enduring regional influence, Netanyahu has advised Trump to stand by the crown prince despite evidence of his involvement in the journalist’s murder.

The Saudi-sanctioned engagement with Israel also serves Omani interests. It enables Oman to demonstrate to President Trump that it can assume the role of mediator in the Israeli-Palestinian context, while deflecting attention from its ongoing economic ties with Iran, which counter efforts by the Trump administration to reduce Iranian energy exports. During a security forum, Yusuf bin Alawi stated that Oman was not proffering peace resolutions itself, but rather relying on the United States and efforts by the U.S. president to implement the so-called “deal of the century.” Efforts by Oman have not gone unnoticed by the Trump administration. Jason Greenblatt, the U.S. Middle East envoy, praised Oman’s “call for deeper relations between Israel and its Arab neighbors,” tweeting that it was “a helpful step for our peace efforts & essential to create an atmosphere of stability, security & prosperity between Israelis, Palestinians & their neighbors.”

Oman, which is neither Sunni- nor Shiite-dominated, plays an important diplomatic role in the Gulf. Omani foreign policy, which is aimed at maintaining friendly relations with all of its neighbors, has enabled the sultanate to balance relations with competing regional superpowers. In recent years, it has refused to join the Saudi-led coalition in Yemen and the Saudi-led boycott against Qatar. Despite being a member of the GCC, Oman has also been able to enjoy diplomatic and economic ties with Iran. By leveraging its independent foreign policy, Oman has taken on the role of a regional mediator. The sultanate hosted secret talks between U.S. and Iranian officials that helped lead to the 2015 nuclear deal. More recently, Oman has been active in efforts to broker peace in Yemen. It has also been suggested that Oman is using its neutrality to promote mediation efforts in Syria.

Oman’s willingness to engage with Israel is not a novel occurrence; it follows a historic pattern of bilateral economic and political initiatives. In the wake of the Egyptian-Israeli peace treaty of 1979, Oman became one of only three Arab states not to break diplomatic ties with Egypt. In the aftermath of the 1993 Oslo Accords, Oman joined Qatar in becoming the only GCC state to openly engage in diplomatic contact with Israel by establishing reciprocal trade representative offices and welcoming several senior Israeli politicians, including former Prime Minister Yitzhak Rabin and his successor, Shimon Peres.

While prior Omani engagement might have challenged regional geopolitics, its most recent call for diplomatic recognition poses a direct challenge to the 2002 Arab Peace initiative, which the sultanate itself supported. According to this “Beirut Initiative,” the 22 members of the Arab League offered to recognize and normalize relations with the Israeli state in exchange for a withdrawal to the 1967 borders and a just and agreed-upon solution to the Palestinian refugee problem. By proposing recognition prior to any advancement in the peace process, Oman opens itself up to criticism concerning its commitment to the Palestinian issue––lending credit to Netanyahu’s quest to formalize ties with Arab nations without resolving the 70-year-old conflict.

Further cooperation between Oman and Israel, as such, has the potential to jeopardize the sultanate’s relations with the Palestinians, who perceive Khaleeji engagement with Israel as a relegation of the Palestinian issue and a “normalization” of the Israeli state. In January, Palestinian Authority (PA) President Mahmoud Abbas offered rebukes of the perceived Khaleeji support for U.S. recognition of Jerusalem as Israel’s capital, stating “if (you) really want to help the Palestinian people, support us, and give us a real hand. If not, you can all go to hell.” Palestinian officials have likewise expressed concern over Oman’s recent moves; the PA has called for an emergency session of the Arab League and the Organization of Islamic Cooperation to address Israel’s increasingly close ties with the Arab world.

True to its foreign policy objectives, Oman has sought to balance its recent engagement with Israel with extensive outreach to the Palestinians. Prior to Netanyahu’s trip, Abbas paid a three-day visit to the Gulf country to discuss Palestinian developments; less than a week after the Israeli leader’s travels, the Omani foreign minister and Omani envoy Salim bin Habib al-Amiri visited Ramallah to offer reports from Sultan Qaboos on Netanyahu’s visit. For now, Oman appears able to avoid overt favoritism. However, with as much as 87 percent of the Arab world opposing formal recognition of Israel, the true test for Oman will be whether it can continue to replicate the dual “special relationship” it has enjoyed in the Gulf in the Israeli-Palestinian sphere.