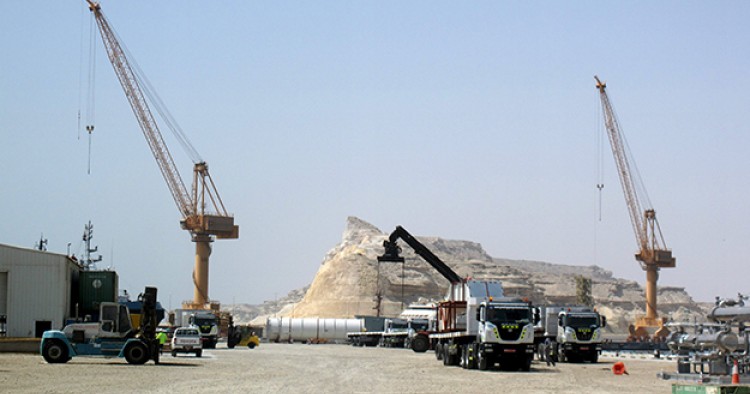 Cinzia Miotto contributed to this article.

In the face of economic challenges and geopolitical shifts, Oman is investing in its strategic partnership with India to diversify Muscat’s web of international allies. This relationship—which dates back to the Indus Valley Civilization when the Arabian Sea’s monsoon winds began facilitating 5,000 years of maritime trade between the two countries—has matured substantially in recent years.[1]

The main drivers of deepening ties include the relevant presence of 700,000 Indian expatriates in the Gulf state and oil-thirsty India’s interest in securing access to hydrocarbon-rich and stable countries within close geographic proximity.[2] Today, amid new economic and security challenges, officials in both Muscat and New Delhi are likely to place more value on bilateral relations.

Grappling with an economic flu resulting from tumbling oil prices, the Omanis are pursuing efforts to decrease their oil dependence by enhancing other sectors in the country, such as agriculture, shipping, manufacturing, mining, transport, tourism, and logistics. In January, Oman’s Supreme Council for Planning released a five-year plan (2016-2020) to reduce the sultanate’s economic dependence on oil by 50 percent in line with Vision 2020 (a long-term strategy laid out in the 1990s aimed at diversifying the sultanate’s economy, developing Oman’s human capital, and integrating the country within the global economy).[3] By strengthening cooperation with India in the areas of construction, investment, finance, insurance, and telecommunications, the Gulf state views New Delhi as an increasingly important player in Oman’s Vision 2020.

Bilateral trade between the two reached $4.18 billion, and, according to India’s embassy in Muscat, mutual investment is roughly $7.5 billion.[4] India, the fifth largest exporter to the sultanate (behind the U.A.E., Japan, the United States, and China), mainly supplies Oman with textiles and garments, machinery and equipment, electronics, chemicals, iron, and steel, as well as food. Oman’s top exports to India are urea, L.N.G. (through spot sales agreements), polypropylene, lubricating oil, dates, and chromite ore.[5]

India is particularly interested in Oman’s Duqm Port and the special economic zone around it. Securing its presence in this port will help India develop energy corridors and trade routes to African, European, and Middle Eastern markets via the sultanate, making deeper economic cooperation with Muscat important for India’s grander set of foreign policy objectives in the Greater Indian Ocean, Eurasian, and MENA regions.

India and Oman have boosted defense cooperation and collaborated on crime prevention and maritime issues since Oman became the first country to establish defense ties with India in the 1970s. In 1996, three years after Indian Prime Minister Pamulaparti Venkata Narasimha Rao’s watershed visit to the sultanate, Oman became the first G.C.C. member to sign an MoU with India on combatting transnational crime and terrorism.[9]

Indo-Omani naval cooperation began in 1998, and both countries’ navies started joint-drills by 2004.[10] During Indian Prime Minister Manmohan Singh’s visit to Oman in 2008, New Delhi and Muscat formed a “strategic partnership,” institutionalizing biennial naval and air exercises: Naseem al-Bahr (Sea Breeze) in the Gulf of Oman and al-Jisr al-Sharqi (Eastern Bridge) in Masirah Island, respectively.[11], [12] Furthermore, the Indian Air Force has been conducting biannual joint exercises with the Royal Air Force of Oman since 2009.[13]

In January 2015, Omani and Indian army units carried out a joint-training exercise, named “Najah-I,” in the sultanate’s Jebel Akhdar mountains to improve combat efficiency, coordinate information exchange, and strengthen field skills.[14] India’s then-ambassador to Oman, J.S. Mukul, said, “With [Najah-I], Oman has become the only country in the region with which India has bilateral institutionalised exercises in all the three defence services on a biennial basis.”[15] India also trains roughly 150 Omani sailors each year and Muscat has granted Indian navy vessels berthing rights, of which India attaches much importance in terms of anti-piracy operations near the Arabian Peninsula and Horn of Africa.[16]

When Indian Defense Minister Manohar Parrikar visited the Arab Gulf state in May, he and his Omani counterparts signed a series of pacts aimed at enhancing bilateral defense ties.[17] India will provide weapons to Oman and New Delhi is not excluding the idea of setting up defense production facilities in the sultanate. Simultaneously, Oman has agreed to purchase Indian small arms systems, built and sold by the India’s state-run Ordnance Factory Board.

Thus, strategic cooperation between the two countries has become essential for safeguarding the waterways, with Oman proving to be an exceptionally reliable and close friend of India in supporting operations with ships and aircraft within the region. India clearly see itself as a stakeholder in Oman’s security and cohesion. In 2013, Muscat awarded an Indian company, the Engineering Projects India Ltd (E.P.I.L.), a contract to construct a fence along Oman's 187-mile border with Yemen, which an Indian government official called a “prestigious project.”[18] Oman seeks to strengthen its security in southern Oman amid fears of Salafist-jihadist groups in Yemen such as al-Qaeda and ISIS spilling over into Dhofar, while simultaneously ensuring the flow of trade across the Omani-Yemeni border.[19] To continue pursuing this balancing act, Oman is looking both to its closest Western allies, chiefly the United States, the United Kingdom, and Germany, as well as powers in the East to safeguard the sultanate from the chaos in Yemen, which Barrett describes as Oman’s “single most important, immediate security issue.”[20]

This security dimension is especially important for Muscat given the uncertainties surrounding Oman’s succession. Observers have warned of militant Islamist extremists in neighboring Yemen striking against Oman amid a period of instability in the post-Qaboos era. As a beacon of tranquility in a region beset by armed conflicts and terrorism, Oman represents a valuable base of trade for many outside of the MENA region seeking to enter the Arabian Peninsula. By deepening ties with India, the Omanis are giving yet another powerful player in the global economy higher stakes in the sultanate’s continued stability and prosperity in the post-Qaboos era.

India’s Middle East policy has received an impetus since Modi came to power in 2015. Outside the G.C.C., India has moved to forge stronger relations with arch nemeses Iran and Israel, and is attempting to act as a diplomatic player in the conflicts in Iraq and Syria—India’s foreign minister toured Baghdad and Damascus last month.[21], [22] Modi’s ascension to power has brought a realization in New Delhi of the importance of greater engagement in the Middle East for its long-term geopolitical, economic, and security interests. With the G.C.C. in particular, the traditional and principal supporters of Pakistan, India sees an interest to undercut Pakistan, while exploring mutually beneficial relations on economic and security levels. India has spotted an opportunity to cultivate its ties with the G.C.C., courtesy of its large expatriate presence in the region as well as recent friction in G.C.C.-Pakistani relations due to Islamabad’s abstention from the Saudi-led war in Yemen and refusal to contribute forces to quell Bahrain’s uprising in 2011.

Concurrently, India and the G.C.C. share growing concerns regarding international security threats, chiefly the meteoric rise of the Islamic State and al-Qaeda’s continued global campaign of terror across multiple continents. Underscored by the numerous unilateral defense agreements that New Delhi has signed with Oman and other Arab Gulf states over the past ten years, India no longer sees the region as a gas station and source of remittances, but a source of real security threats as well as economic opportunities.

Indian Defense Minister Parrikar’s visit to the sultanate in May, during which New Delhi and Muscat signed pacts to bolster defense and security relations, underscored the important role Oman plays in India’s long-term quest to consolidate geo-economic influence and strategic clout in the greater Middle East. Of course, India’s improving ties with Iran will have implications for its relations with Saudi Arabia and other Arab Gulf states. A closer relationship with Oman, known for a neutral, flexible, and pragmatic foreign policy, should help India navigate the sensitive geopolitical fault lines of the M.E.N.A. region.

For years there has been intense talk between Oman, India, and Iran about the construction of underwater pipelines to supply India with gas from Iran, establishing an Indo-Middle Eastern energy triangle. Iran and Oman signed a $60 billion contract in 2013 for the gas supply to the sultanate for 25 years via a pipeline connecting Iran’s Hormozgan province with Oman’s Sohar.[24] The Middle East to India Deepwater Pipeline (M.E.I.D.P.) is a planned 745-805-mile pipeline which brings India into the fold. M.E.I.D.P. will export 31.5 million standard cubic meters of gas per day from Iran’s Chabahar Port, transiting the Gulf of Oman to Oman’s Ras al-Jafan, before traveling across the Arabian Sea to India’s Gujarat, bypassing Pakistani waters.[25]

To counter China’s “One Belt, One Road” (O.B.O.R.) initiative, New Delhi’s International North-South Transit Corridor (I.N.S.T.C.) project, “a multi-modal transportation route linking India Ocean and Persian Gulf to the Caspian Sea via Iran, and onward to northern Europe via St. Petersburg in Russia,” promises to provide India access to MENA, the Caucasus, Central Asian, and European markets with Iran’s Chabahar port serving as the route’s outlet to the Indian Ocean.[26] By investing in Chabahar, the I.N.S.T.C. enables India to secure a foothold in gas-rich Central Asian states. Oman is a partner in the I.N.S.T.C. and seeks to leverage India’s geo-economic footprint in Central Asia to the sultanate’s advantage.[27]

Balancing Ties between India, China and the West

Of course, growing energy ties between Oman, India, and Iran do not occur in a geopolitical vacuum. Surrounded by more powerful states, Muscat has historically sought to balance the interests of larger powers against each other to advance Oman’s national interests and protect the sultanate’s relatively independent foreign policy by never growing excessively dependent on any single ally. As New Delhi grows increasingly invested in the Arabian Gulf and MENA region’s security landscape, India’s geopolitical rivalries with China and Pakistan—two other Omani allies—are likely to manifest in Oman and other G.C.C. states, enabling Muscat to play New Delhi, Beijing, and Islamabad’s competing stakes off each other.

Oman has equally expressed interest in Beijing’s O.B.O.R., and is keen to expand its relations with China, its top export partner—Sino-Omani bilateral trade reached $23 billion in 2013.[28] In addition to the economic potential of joining China’s O.B.O.R., defense ties with Beijing have been on the rise since China’s decision to participate in anti-piracy efforts in the Gulf of Aden, with Chinese ships making regular port calls to Oman’s Port of Salalah.[29] Although increased competition between India and China, and India and Pakistan, is certain to lay landmines for Oman’s foreign policy, the Omanis have demonstrated a skill of carefully navigating relations between enemies (Iran and the G.C.C., for example). Its pragmatic “friend to all” mantra is likely to be applied in the Sino-Indo, and Pakistani-Indo contexts.

Similarly, by deepening ties with India, Oman can more freely develop its own foreign policy in the Indian Ocean and subcontinent with less pressure from the sultanate’s traditional Western allies. Given the U.S. and U.K.’s close relations with India, Muscat is unlikely to come under pressure from Washington to avoid strengthening ties with India, as the sultanate did when Omani officials began exploring growing energy relations with Iran in the 2000s.[30] While Oman’s military and security ties with the United States and the United Kingdom are virtually irreplaceable, expanding relations economically with Eastern powers, in particular India, grants Muscat room to maneuver. Just as Oman has successfully crafted a neutral and independent stance on a regional level—more specifically between Iran and Saudi Arabia—it is now attempting to achieve a similar level of indispensable neutrality on a global level by balancing its relations with the world’s great powers. Strengthening its relations with India, and marketing itself to New Delhi as a stable and viable partner for Indian interests in the Greater Middle East, serves this purpose.