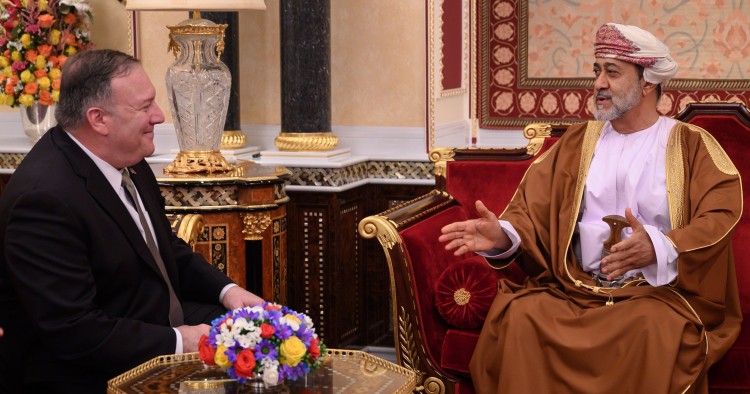 Since Aug. 13, speculation has been rife that the Sultanate of Oman will soon follow the United Arab Emirates’ (UAE) lead and formalize full-fledged ties with Israel. Yet, at least thus far, Muscat has refused to join the UAE, Bahrain, and now Sudan in normalizing relations with Tel Aviv.

As a moderate Arab country, where tolerance is firmly embedded into the national ethos and the Ibadi sect of Islam, Oman appears to be maintaining a balanced position on the overall Arab trend toward normalizing relations with Israel. Muscat’s positive reaction to the Abraham Accords is not a major change in strategy and is more illustrative of Oman’s longstanding position on normalization. Oman was one of only three Arab League members that refused to take diplomatic action against Egypt following the Camp David peace treaty in 1979. Unlike other Gulf Arab monarchies, Oman has always respected Egypt’s right to formalize full-fledged relations with Israel.

Omani diplomats constantly work to help actors around the Middle East find peaceful solutions to regional crises. The sultanate’s position as the volatile region’s “island of neutrality” has long made Muscat a credible diplomatic bridge between Israelis and Palestinians, the U.S. and Iran, and Arab states and Iran. Ultimately, in order to continue playing this constructive peacemaker role, Oman must strike a delicate balance and signing an accord with Israel could throw this off in various ways — chiefly by burning bridges with certain Palestinian factions. While Oman contends with several regional and domestic challenges, Muscat will likely wait longer before formalizing relations with the Jewish state.

To begin, the Iranian factor is key. Oman has always been the Gulf Cooperation Council (GCC) state most sensitive to Iran’s security interests. As the only GCC member to be neutral in the Iran-Iraq war (1980-88) and the only Arab Gulf country that engages in joint military exercises with Iran, Oman has carefully balanced itself geopolitically between Tehran and Riyadh. For many years, Omani-Iranian ties have been based on mutual respect and trust. Oman’s new leader, Sultan Haitham bin Tariq al-Said, is keen to maintain Oman’s excellent relationship with Iran, which an Omani-Israeli diplomatic agreement could harm.

Muscat understands that Tehran perceives the Abraham Accords as a threat to Iran’s national security. An Omani-Israeli accord would only deepen such Iranian concerns, and Oman does not seek to add to the Islamic Republic’s sense of vulnerability. Tehran is already wary of Oman and Israel’s decades-long unofficial relationship — exemplified by a rare instance of public criticism of Oman by Iran’s government after Israeli Prime Minister Benjamin Netanyahu visited Muscat in October 2018.

Omani officials address foreign policy dilemmas through long-term thinking. Muscat avoids sudden and impulsive moves aimed at generating temporary attention and fanfare. Instead, Oman focuses on steadily working toward lasting peace — an often frustrating and painful process that involves patience and many years of quiet diplomacy. The Joint Comprehensive Plan of Action in 2015 was a salient example of successful Omani backchannel diplomacy as Muscat facilitated the initial U.S.-Iran talks in 2012-13. From Oman’s perspective, normalization of relations with Israel — even if desirable from the standpoints of trade, tourism, investment, and so on — would be premature. Muscat’s position is that an accord with Israel would require agreement from Tel Aviv on the Arab Peace Initiative (API).

The timing of the UAE and Bahrain’s normalization of relations with Tel Aviv was likely connected to the upcoming U.S. presidential election. With Donald Trump achieving relatively few diplomatic victories in the Middle East during his time in office, Abu Dhabi and Manama’s decisions handed him a foreign policy triumph praised by lawmakers on both sides of the partisan divide — a rare occurrence for Trump. Yet, just as Oman is sensitive about foreign countries interfering in its internal affairs, Muscat goes to pains to avoid taking any side in U.S. domestic politics. This neutrality serves Oman’s interests in being able to work closely with any administration, regardless of party. This is to say, the sultanate’s decision on Israel will not be geared toward influencing any American election result.

By holding off on formalizing diplomatic relations with Israel, Sultan Haitham’s leadership is maintaining continuity in Omani foreign policy. Although this year featured great changes in governance, with Sultan Qaboos passing away and Yusuf bin Alawi stepping down from his more than 30-year tenure as the minister responsible for foreign affairs, the fundamentals of Muscat’s approach to international politics remain firmly in place. The API has received Oman’s support since then-Saudi Crown Prince Abdullah set it forth 18 years ago in Beirut, and the new Omani leader is not shifting this principled position.

The new foreign minister (a position that Sultan Qaboos had, on paper, assumed himself during his long rule), Sayyid Badr bin Hamad al-Busaidi, was bin Alawi’s longtime deputy and is well versed in the careful balancing act that has for decades been the hallmark of Oman’s foreign policy. Both Sayyid Badr and Yusuf bin Alawi served in the Omani Foreign Ministry under the current Sultan Haitham, who was its secretary-general between 1994 and 2002. In a 2003 lecture to a think tank in Brussels, Sayyid Badr summed up the “Omani way” of diplomacy when he stated: “We try to make use of our intermediate position between larger powers to reduce the potential for conflict in our immediate neighborhood (…) we can create space for our own actions. And furthermore, and this seems to me to be crucial, it is precisely in that space that we — that is to say, small states — may be able to act in ways that others cannot.”

An Omani government statement issued after the Sept. 11 announcement of Bahrain and Israel’s opening of full-fledged relations typified Oman’s careful approach: “…this new strategic path taken by some Arab countries will contribute to bringing about a peace based on an end to the Israeli occupation of Palestinian lands and on establishing an independent Palestinian state with East Jerusalem as capital.”

This message of continuity is even more relevant given the ongoing pandemic and economic crisis in Oman, which make it important for the sultanate to project an image of calm and “business as usual.” In other words, Muscat does not believe that this is the time to start potentially risky new foreign policy ventures in uncharted territory. Oman is likely to hedge its bets in the short term to wait and see what happens in Washington following the U.S. presidential election, and how the Abraham Accords and the subsequent Sudan-Israel deal pan out.

Down the road, could external pressures come down on Muscat to follow Abu Dhabi, Manama, and Khartoum’s lead in opening formal ties with Israel? Yes. There is reason to consider that the U.S. and the UAE will play cards to incentivize post-Qaboos Oman to normalize relations with the Jewish state. If the sultanate’s economic woes worsen, such pressure might be more difficult for Muscat to circumvent. Yet, if officials in the U.S. would like to stand by their longstanding partner amid a difficult period marked by COVID-19 and low oil prices, it would behoove Washington to support Muscat approaching Israel on its own terms.

Kristian Coates Ulrichsen is a Fellow for the Middle East at Rice University's Baker Institute. Giorgio Cafiero is the CEO and founder of Gulf State Analytics, a geopolitical risk consultancy based in Washington, DC. The views expressed in this piece are their own.