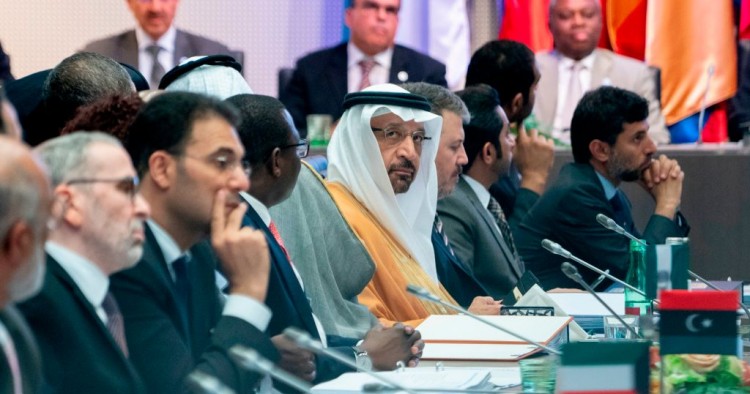 OPEC+ nations have ended speculation about whether they would continue oil production cuts by agreeing to a nine-month extension. Led by the global petroleum powers Saudi Arabia and Russia, the group agreed on July 2 to extend the current level of cuts until the second quarter of 2020.

Saudi Arabia will continue shouldering the biggest share of the reduction, although U.S. sanctions that have hammered Iranian exports will give the Saudis a chance to recoup some of that by grabbing Iran’s lost market share.

In the run-up to the sixth meeting since Russia joined forces with OPEC members three years ago to try to establish a price floor, Saudi Arabia stuck to its pattern of insisting that previous production quotas — in this instance, those set in December 2018 — be maintained. Russia also stuck to its long-held pattern of keeping the market in suspense by sending mixed signals about its intentions until the last minute.

The only element missing from the established patterns among major petroleum producers was President Donald Trump’s failure to tweet a warning to OPEC+ against pursuing policies that would increase prices.

Rising US-Iran tensions and concerns about Libya and Venezuela

OPEC+’s decision to maintain production rates came against the backdrop of an escalation in tensions between the United States and Iran. Stoking the tensions were attacks on oil tankers in the Strait of Hormuz and pipelines in Saudi Arabia, as well as Iran’s downing of a U.S. military drone.

The OPEC+ gathering was the first since the United States refused to continue granting nine countries waivers on sanctions it had slapped on other nations that had been importing Iranian crude.

Geopolitical developments that could affect the production of two OPEC members — a resurgence in Libya’s civil war and more U.S. sanctions on Venezuela — added another layer of complexity to the meeting. OPEC+ members took some solace in the fact that Libya’s return to conflict had yet to crimp its output.

Although Iranian exports have plummeted to a 30-year low of around 500,000 barrels per day (bpd), Tehran supported the hold-the-line policy on cuts that its archenemy Saudi Arabia was championing. Iran has little leverage at the moment, given the bite of U.S. sanctions.

A new framework for OPEC+

OPEC+ nations also adopted Russia’s version of a long-discussed framework for future working relations known as the Charter for Cooperation. Saudi Crown Prince Mohammed bin Salman had wanted OPEC+ to be a permanent fixture whose decisions were binding on members, while Russian Energy Minister Alexander Novak had sought a looser, non-binding arrangement.

The group ended up adopting a Gas Exporting Countries-style charter that simply calls for members to cooperate to try to achieve beneficial prices. This development is important for several reasons. While the format of the charter illustrates Russia’s reluctance to commit to any long-term arrangement, it also demonstrates how Moscow can successfully impose its will within OPEC+. Not only does it embolden Russia within the cartel, it also strengthens the notion of its indispensability to the group.

OPEC will celebrate its 60th anniversary in 2020, and since its founding in 1960 cartel members have become embroiled in a number of military conflicts and have punished Western countries that hurt their interests by imposing oil embargoes. Although it has reinvented itself over the years to adapt to changing conditions, the cartel has maintained its cohesion despite geopolitical disputes between some members and domestic turmoil in others.

The reason it has been able to maintain global market stability at a time of growing hostility between the United States and Iran is that both OPEC and non-OPEC producers have stepped in to fill the void left by the plunge in Iranian exports. Saudi Arabia, in particular, plays a central role in this regard.

Saudi Arabia’s output is hovering below 10 million bpd, a bit less than its quota of 10.3 million bpd. This gives it the flexibility to increase output to prevent competitors from grabbing markets that Iran has lost, particularly China and India.

Al-Falih’s statement indicates that Saudi Arabia is pursuing a strategy of being patient until the competition from American shale begins fading. A key part of that strategy is the Saudis bearing whatever economic costs and geopolitical risks they must to preserve their leadership of OPEC. Although the cartel is not as potent as it was before the U.S. shale boom, the Saudis still have more ability than other members to impact prices.

Saudi Arabia is aware, however, that OPEC’s current reliance on Russia to help maintain global prices could jeopardize the cartel’s cohesion over time. If this reliance continues, it would not be out of the realm of possibility that it could eventually lead to OPEC’s breakup.