Outside Views on the U.S. Strategy for Iraq and Syria and the Evolution of Islamic Extremism 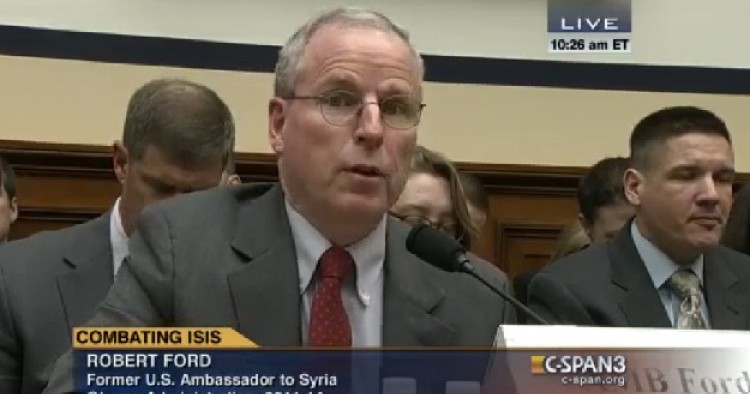 Amb. Robert Ford delivered the following prepared remarks at a hearing of the U.S. House Armed Services Committee on January 12, 2016. Click here to watch C-SPAN's coverage of the hearing.

Mr. Chairman and members of the Committee,

It is an honor to be on this distinguished panel.  Thank you for inviting me.

We have American military personnel deployed in combat operations in Iraq and Syria against the Islamic State.  There needs to be a serious national discussion about what we are doing and whether we are doing all we can to succeed.  And not just succeed ins destroying the Islamic State but also in ensuring that it doesn't return in a new, even more virulent form.

I will focus more on the political angles, leaving the military tactics to those who have greater military experience. Overall, my assessment of our efforts, and those of our allies, is that (1) there is progress being made against the Islamic State in Iraq, (2) more needs and can be done there to ensure long-term success; (3) that the Islamic State in Syria will be a harder problem than Iraq, and (4) we need to pay more attention to the Islamic State's activities in North Africa.

Forces loyal to the Iraqi government, with help from the American-led coalition, slowly, steadily are recapturing territories from the Islamic State and holding nearly all the areas they recapture.

Holding territories matters because the Islamic State now controls large spaces. It has a bureaucracy. It publishes schoolbooks, collects taxes, operates a military and even writes parking tickets. One analyst has said the Islamic State is more than just the sum total of all of its fighters.

Recapturing its territory and shutting down its state operations matters in terms of reducing the threat it poses to us and also to undermining its theological case for existence.  In brief, if it can't impose shari'a in territories it controls, then even hardline Islamist scholars would deny its right to exist as a proclaimed caliphate and thus would dent its recruitment draw.  This is all the more true if Sunni Arabs, from whose communities most of the fighters for the Islamic State in Iraq came, can return to their homes, and there are functioning services that operate better than whatever the Islamic State had before.

Big military challenges remain, including recapture of Fallujah and the sprawling city of Mosul.  Iraqi forces eventually can do it, with our discrete backing, and they don't want large numbers of foreign forces on Iraqi soil.  This means that it will take longer than we might like, but injecting large numbers of western forces into Iraq will play into the Islamic State's recruitment effort.

I visited Iraq in October to meet Iraqi leaders, many of whom I have known since 2004.  They were confident that the Islamic State tide had crested even before the recapture of Ramadi.  But in Baghdad and the Kurdish region capital of Erbil, leaders worried about finding the resources to fight the Islamic State. Low oil prices have hit both the central government and the Kurdish regional government. Kurdish Peshmerga fighters often wait months for their pay.  I also plainly heard frustration that American arms are not flowing in fast enough. There is even some bizarre conspiracy-theory thinking that the Americans don't want to destroy the Islamic State.

More favorably, Iraqi politics are evolving in a potentially favorable way that would undergird longer-term stability.  Iraqi Sunni Arabs from Ramadi and Mosul whom I met no longer hope to dominate the central government.  Instead, most said they want to govern themselves in a decentralized or even federal Iraq, enjoying basically the same local governance that the Iraqi Kurds enjoy. This is a 180 degree turn from before, it is in line with the political vision of Iraq that the Iraqi Shia and Kurdish leaders used to emphasize 10 years ago, and it is consistent with the Iraqi constitution.  Hopefully, Iraq's leaders can develop a governance formula all accept.

Many of the mistakes that enabled the resurrection of the Islamic State in Iraq in 2012-2013 stemmed from Sunni Arab resentment at discrimination and corruption by Baghdad authorities operating in their towns and cities; many Mosul residents welcomed Islamic State fighters when the city fell in June 2014. If the Sunni Arabs in places like Anbar and Mosul can establish a greater degree of local governance and accountability, then perhaps the mistake of 2012-2013 need not be repeated and the Islamic State over time can be ground out of the holes it will hide in after the major cities all are recaptured.

If by contrast national reconciliation again falters like 2011-2013, we eventually will see a third version of al-Qaida in Iraq/the Islamic State.   Our interest, therefore, is to help promote national reconciliation and agreed governance provisions in Iraq.  Sunni Arab fears of Shia militia, often well-founded, and Shia bitterness at Sunni Arab past actions, also well-founded, create situations where honest brokers, such as the UN and the Americans, are needed to help develop real discussions among Iraqis that in turn develop solutions.

In sum, going forward we should

On the positive side, the Syrian Democratic Forces, an entity we have stitched together mostly from PKK-affiliated Kurds as well as Arab fighters, have recaptured a large stretch of mostly Kurdish territories in northern Syria. These advances impede Islamic State movement and operations and reduce its oil revenues.

However, the Kurdish fighters are operating in the broader context of the Syrian civil war.  They are unilaterally establishing an autonomous region in northern Syria.  This area is not like Iraqi Kurdistan - it has Kurdish, Arab, Turkoman and Assyrian communities scattered amongst each other.  Moreover, the Syrian Kurds have historic family and social ties with Turkish Kurds that the Iraqi Kurds do not have.  Thus, this autonomous region along the Syrian-Turkish border is sensitive to many Syrian communities, not just the Kurds, and to Turkey.  We will have to address Turkish concerns if we want its help.

The American-backed Syrian Democratic Forces have not taken back a major Arab city from the Islamic State.  The Syrian Kurds are wisely being very careful.  If they focus mainly on their autonomous region, however, the rest of eastern Syria is a big space. It is not clear how the American-backed Arab fighters, who are limited in number, can retake it against a numerically superior Islamic State force, much less hold it against an Islamic State insurgency.

The Islamic State, moreover, will enjoy two special boosts to its recruitment efforts in Syria, neither of which need apply in Iraq:

The great majority of Syrian armed opposition groups, much larger than the Syrian Democratic Forces, also fight the Islamic State, but their main focus is against Assad.  They will never join with the current Syrian government against the Islamic State.  Even the Arab fighters in the American-backed Syrian Democratic Forces say they also fight for the Syrian revolution against Assad.  The Russians want all these armed opposition forces to join with the current Syrian government, perhaps with some cosmetic changes.  After the intense bloodletting and atrocities, it will not happen until there is a dramatically different national government.

Without a new Syrian national government able to mobilize more Syrians under its banner against the Islamic State, we will just see disjointed efforts continue.  Moderate opposition fighters will fight it on one track, the Syrian government and its backers occasionally will fight it on a separate track and the American-backed SDF effort will be a third track.  Tacking advantage of that confusion, the Islamic State will control substantial territories for years yet.

On top of this, there is the separate problem of the big al-Qaida operation embedded in Syria. Most of the fighters and their local communities don't have much political sympathy for the al-Qaida project.  However, largely abandoned by western countries in their drive to get rid of the Assad government, they have resorted to working even with al-Qaida's Nusra Front against Bashar al-Assad.  There will be no Syrian-led reckoning with al-Qaida in Syria until Assad goes.

Thus, in Syria we should:

Beyond Iraq and Syria

Finally, North Africa is also an important region in the fight against the Islamic State.  Its Libyan branch lost the city of Darna near Egypt but captured the city of Sirte along the central coast, and its fighters have gained control of more oilfields.  Moreover, as occurred in Syria, Islamic State loyalists can use Libyan bases to launch fighters and resources to threaten neighbors like Tunisia and Algeria as well as to prepare attacks against western targets.  The Islamic State threat adds to an existing al-Qaida threat in the region.

History can judge the efficacy of western post-Qaddafi efforts in Libya in 2011-2012, but looking forward, we need to be ready to strongly back whatever tenuous national unity government emerges from the UN-led reconciliation effort.  Our Algerian friends are cautioning, as do our Iraqi friends, that injecting large numbers of western troops is not the answer.  Rather, as in Iraq, we need to help build capable indigenous forces and understand this will take serious resources and substantial time.