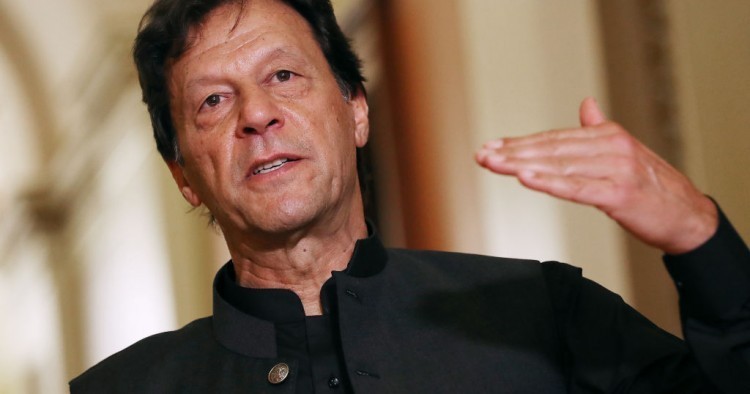 On Sept. 13, Bahrain recognized Israel at a ceremony attended by US President Donald Trump at the White House. With the stroke of a pen, Bahrain became the fourth Arab state to have forged official ties with Israel, following in the footsteps of Egypt (1979), Jordan (1994), and most recently, the UAE (Aug. 13, 2020). Despite having no disputes or conflicts with Israel, Pakistan plans to hold fast to its non-recognition of the Jewish state, a long-standing position that is rooted in feelings of Islamic solidarity with Arab countries.

The diplomatic recognition of Israel by two prominent Gulf countries marks a shift in the Arabian Peninsula at large, as the UAE and Bahrain could not have gone ahead without the tacit approval of Saudi Arabia. Following this unprecedented development, many Pakistani commentators wondered whether Islamabad might follow suit. The logic is simple and straightforward: Why should Pakistan refuse formal ties with Israel on the basis of the Arab-Israeli conflict when Arab countries themselves are openly fostering a relationship with Israel? But Prime Minister Imran Khan has ruled out this possibility, reasserting Pakistan’s traditional stance, “Whatever any country does, our position is very clear. And our position was made clear by [Pakistan’s founder] Quaid-e-Azam Muhammad Ali Jinnah … in 1948: that we cannot ever accept Israel as long as Palestinians are not given their rights and there is no just settlement.” Pakistan’s perception of itself as the flag-bearer of Muslims; its authoritarian political culture; and the constant inability of its leaders to redefine Pakistani nationalism in positive terms have all erected formidable barriers to making rational foreign policy decisions. Its refusal to engage with Israel is a prime example of this.

Those who advocate for normalization draw attention to the most important potential benefit for Pakistan: improved relations with the US. At present, the US is suspicious of Pakistan. Former US Secretary of Defense Gen. Jim Mattis in his memoirs identified Pakistan as the most dangerous country in the world “because of the radicalization of its society and the availability of nuclear weapons.” By normalizing with Israel, Islamabad could prove to American leadership that it is ready to let pragmatism, rather than extremism, drive its policymaking. Pakistan would also benefit from the chance to purchase Israeli-made advanced weapons systems, which was a major motivation behind the UAE’s and Bahrain’s recent actions. Pakistan’s long-standing enmity toward India is an additional variable that must always be factored in when analyzing Pakistan’s foreign policy choices. On the one hand, Pakistan has a chance to gain an upper hand over its neighbor by improving its relationship with America. On the other hand, Pakistan enjoys looking down on India from what it defines as the moral high ground, and normalization would mean that Islamabad could no longer credibly use India’s warm relations with Israel as evidence of its neighbor’s Islamophobia. By all appearances, Pakistan is placing this and other factors that discourage normalization above the practical advantages of ties with Tel Aviv.

Gulf countries and Israel see their landmark deal as a form of opposition to Iran’s growing regional power and influence. In today’s world, the two most significant strategic challenges in the Middle East are the Iran-Saudi divide and the involvement of outside powers competing for influence in the region. In this context, many Arab states feel that Iran and Turkey constitute bigger threats to regional peace and security than Israel. This is due to Turkey’s support for the Muslim Brotherhood as well as its pursuit of greater influence over former Ottoman domains and to Iran’s adventurous military engagements in Iraq, Syria, Yemen, and Lebanon. A growing sense that the geopolitical interests of Iran, Turkey, and China are converging has also exacerbated fears across the Middle East.

Despite fast-changing political circumstances, Pakistan is mired in the past, and fails to realize that the Muslim world has lost its appetite for bringing its collective leverage to bear on the issue of Palestine. In fact, the very idea that the Muslim world, out of a sense of Islamic solidarity, would pressure Washington and Tel Aviv into conceding political ground on Palestine has proved illusory. Even those Arab states that have not declared official ties with Israel are welcoming visits from Israeli ministers, academics, and athletic teams; forging business relationships in the security sector; and opening their airspace to commercial flights to and from Israel. In other words, they are laying the groundwork for broader normalization in the future. But Pakistan has been unable, or more likely unwilling, to understand what is unfolding in the Arab world.

Momentum for normalization between Israel and the Muslim world has been building for decades. Israel and Egypt signed a treaty in 1979. In 1994, Israel established diplomatic relations with Jordan through the mediation of President Bill Clinton. Today, Riyadh is making efforts to improve relations with Israel to defend itself against the perceived threat from Iran. These developments over the course of the years have disgruntled many Muslims across the globe. The UAE and Bahrain’s normalization of ties with Israel has thus created a space for ambitious non-Arab Muslim countries, such as Malaysia and Turkey, to compete for the mantle of Muslim leadership. Pakistan too seems eager to throw its hat — or rather its Jinnah cap — in the ring. However, its attempts so far to shape its foreign policy around Pan-Islamic solidarity have foundered on a lack   of proper planning and foresight. These shortcomings were made evident early this year in the fiasco caused by Pakistan’s last-minute withdrawal from the Kuala Lumpur Summit, a conference that brings together representatives from around the Muslim world to coordinate responses to global issues. Pakistan was keen to take part in the summit, but ultimately pulled out because its ally in Riyadh was wary of the event, which featured the participation of its geopolitical rivals — Turkey, Iran, and Qatar.

Pakistan’s relationship with other Muslim countries

Pakistan has historically been very friendly with Saudi Arabia and the UAE due to many factors, including the presence of around four million of its expatriates in the two countries. In recent years, Pakistan’s ties with Saudi Arabia have been adversely affected by Riyadh’s softening attitude towards India’s policies in Kashmir. In general, Pakistan’s ruling establishment is frustrated by India’s growing engagement with the Arab world, which has blunted traditional Arab support for Islamabad on matters related to Kashmir. In late August, Pakistan’s Foreign Minister Shah Mehmood Qureshi, signaled out Saudi Arabia when, in a disparaging tone, he called upon the Kingdom to “show leadership” on the issue of Kashmir.

Imran Khan’s fondness for Turkish president Recep Tayyip Erdogan has distorted Pakistan’s foreign policy choices and hardened its stance toward Israel. Since Erdogan has been more than willing to raise the Kashmir issue at the UN General Assembly, Imran Khan has gone out of his way to improve his country’s ties with Turkey, often at the expense of Saudi Arabia. Pakistan’s neglect of Saudi Arabia, which from a geo-strategic perspective is a more logical ally than Turkey, shows how an obsession with the Kashmir issue leads Islamabad astray when it comes to foreign policy. The fledgling Pakistani-Turkish friendship even extends to the domain of popular culture. One of the most popular television shows in Pakistan today is “Ertugrul,” a Turkish production that portrays the founding of the Ottoman Empire and promotes traditional Islamic values and culture. And none other than Imran Khan is promoting Turkish television dramas in Pakistan.

However, if Khan believes that his iciness towards Israel might ingratiate him with his counterpart in Ankara, he would do well to recall that Turkey has diplomatic ties with Israel that have remained largely intact in spite of many ups and downs over the last decade. Turkey remains cordial with Israel in case its relationship with Iran sours. Although there has been a détente between Iran and Turkey due to shared animosity toward Saudi Arabia and the UAE, it would be erroneous to view this strategic convergence as durable. Moreover, as a champion of Sunni Islam, Turkey cannot blindly support Iran in confronting the Arab states, and Erdogan has actively supported Sunni groups against the Iran-supported Shia militias in theaters of conflict.

Pakistan and Israel: A legacy of false starts

Although there is no diplomatic relationship between Islamabad and Tel Aviv, the two countries have come in contact on occasion. Former Pakistani President Pervez Musharraf has been openly supportive of his country establishing diplomatic ties with Israel, if the Palestinians and Israelis reach a peace deal. Ironically, it was Erdogan, whom PM Khan seeks to please with his anti-Israel rhetoric, who facilitated a landmark meeting between Pakistan’s foreign minister Khurshid Kasuri and his Israeli counterpart Silvan Shalom in 2005. This meeting was criticized heavily by Pakistan’s Islamic parties. Soon after, political turmoil in Pakistan and the subsequent ouster of Musharraf caused the initiative to officially recognize Israel to lose steam.

Pakistan may view Israel as an enemy, but Tel Aviv has no reason to reciprocate the sentiment. Israel’s Prime Minister Benjamin Netanyahu, on an official trip to India in early 2018, brushed aside the idea that Israel views Pakistan as an enemy state, saying “We [Israel] are not an enemy of Pakistan and Pakistan should not be our enemy either.” This led to demands for Pakistan to revisit its policy towards Israel. But Pakistan’s Senate Chairman Raza Rabbani “warned the Muslim world that the emerging nexus between the United State, Israel and India is a major threat to the ummah.” This type of irrational hyperbole only seeds conspiracy theories in the fertile ground of Pakistan.

While the Pakistani public’s deep-rooted sympathy with the Palestinian cause is understandable, this feeling sometimes boils over into anti-Israel demonstrations in the streets. Islamists in Pakistan do not only criticize Jews;  large anti-Shia public rallies broke out in Pakistani cities in recent weeks. What is most surprising about these rallies is that three mutually antagonistic Sunni groups – Deobandi, Barelvis and Salafists – joined together to denounce Shias as “heretics.” Anti-Shia politics are not a new phenomenon in Pakistan, but in recent years Pakistan’s military establishment has deliberately mainstreamed religious extremists and thus given impetus to this brand of political mobilization. Growing religious extremism bears upon Pakistan’s diplomatic choices, including any possible normalization with Israel. Religious groups, which hold a great deal of street power, cannot be expected to tone down their rhetoric against Israel.

Backlash from certain quarters must not be the main driver of Islamabad’s choices, however. Transformative changes are happening in the Middle East and Pakistan’s foreign policy should adapt to them. Now that the Arab world, which once championed anti-Zionism, is gravitating towards Israel, Pakistan has a window of opportunity to reconsider its own Israel policy. By moving closer to Israel, Saudi Arabia and the UAE, Pakistan’s biggest benefactors in the Arab world, have clearly indicated that they are no longer willing to be associated with the regressive mindset that has turned Pakistan into the “dangerous country” described by Gen. Mattis. History suggests that public opinion is subject to momentous shifts in response to leadership initiatives. There are reasonable politicians in Pakistan who are willing to take initiative in regard to Israel, but Pakistan’s ideological inflexibility is likely to prevent this from happening in the foreseeable future.