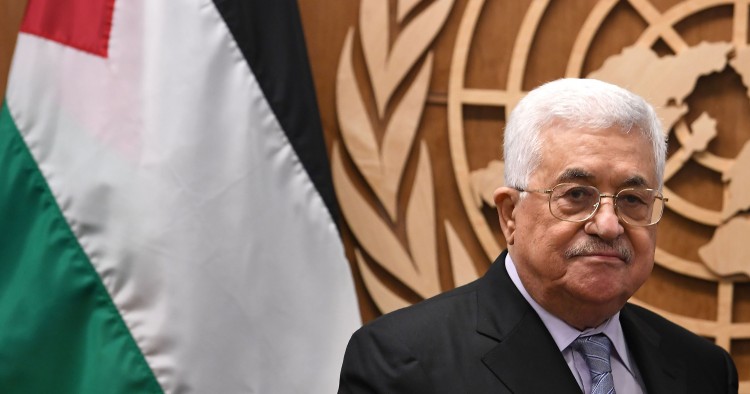 “Abbas needs a crisis,” a veteran Palestinian analyst told me, circa 2012. Sitting in his East Jerusalem office, surrounded by photos chronicling Palestinian history in sepia, the respected academic was commenting on the inertia that has long characterized the policy decisions of Palestinian President Mahmoud Abbas.

Indeed, since Benjamin Netanyahu became Israeli prime minister in 2009, Abbas has juggled between three tracks: negotiations with Israel, rapprochement with his Hamas rivals and efforts to assert Palestine’s sovereignty diplomatically. Abbas’ fall 2011 push for full Palestinian membership in the U.N. came after a failure to restart talks with Israel. Abbas’ negotiators signed the April 2014 Beach Camp Agreement with Hamas as U.S. Secretary of State John Kerry’s peace initiative was collapsing. Advisors to President Abbas argued throughout the Obama years that the PLO was pursuing a tripartite strategy, including: (1) reunifying the Palestinian political system; (2) supporting grassroots activism against the occupation at home and abroad; and (3) strengthening Palestine’s status legally and diplomatically, via membership in U.N. agencies and treaty bodies.

In practice, implementation has been uneven. Abbas has been most active on the international track. In 2012, Palestine secured nonmember observer state status in the U.N. General Assembly. Abbas also supported efforts to take Israel to the International Criminal Court. Abbas has not heeded calls to join the World Intellectual Property Organization (WIPO), which provides a forum for regulating global patents.

U.S. law requires the United States to cut funding to any U.N. agency that admits Palestine as a state. As such, Palestinian membership in WIPO or, say, the International Atomic Energy Agency, could see the U.S. defunding and potentially withdrawing from critical international institutions, damaging U.S. interests. If Abbas were determined to maximize Palestine’s international recognition as a state (and accrue leverage vis-a-vis Washington), these would be key venues for doing so. But he has been unwilling to risk that level of confrontation with the U.S. Similarly, despite his Fatah faction having signed numerous reconciliation agreements with Hamas, Abbas has taken few steps to toward implementation. Despite Abbas’ commitment to “popular resistance” against the occupation, Palestinian Authority (PA) security forces routinely harass and detain even purely nonviolent Palestinian activists, including some simply for making critical Facebook posts.

Years of discussions with Palestinian politicians, security officials and analysts have emphasized that Abbas views the Second Intifada, which saw Palestinian suicide bombers targeting Israeli civilians and the reoccupation of Palestinian cities by the Israeli military, as an enormous strategic mistake. He fears—not unreasonably—that confrontations between Palestinians and Israeli security forces or settlers could escalate into an armed conflict that would be catastrophic for his side. He also deeply distrusts Hamas and fears (with justification) that reconciliation would damage political and financial support to the PA from the international community. Despite their stated support for Palestinian elections, the extent to which the U.S., EU and its member states would support a post-election government, including Hamas officials, remains far from clear.

Thus far, Abbas’ record suggests that he has been unwilling to seriously commit to any course of action other than the pursuit of a negotiated two-state solution under U.S. auspices. For years, despite seeing no meaningful progress toward Palestinian statehood, he prioritized maintaining positive relations with Washington. Abbas calculated that only the U.S. possessed the leverage necessary to press Israel to grant the Palestinians a state. None of this justifies Abbas’ repression of internal dissent, his role in the Palestinians’ failure to organize elections, or the economic sanctions he imposed on Gaza in 2017. That said, Abbas did not have—and does not have—other easy options for realizing Palestinian independence.

The Palestinians are not without agency. Reform of their political system, to bring forth new leadership with a popular mandate, coupled with a carefully organized campaign of nonviolence on the ground and coordinated international activism, could grant the Palestinians leverage vis-a-vis Israel. But none of this would be easy. Such a campaign would take time, incurring real human and material costs, without any guarantee of success.

Seen in this light, it is easier to understand Abbas’ reluctance to rock the boat. At least until President Donald Trump’s December 2017 recognition of Jerusalem as Israel’s capital, Abbas calculated that it was wiser to play for time, manage a deteriorating status quo, keep the Americans on board, and hope that they would deliver Israel.

But Trump’s Jerusalem move, coupled with widespread reports that the Trump administration’s nascent peace plan would fall far short of Palestinian demands, forced Abbas’ hand. Even if he were not personally incensed (which he is), Abbas had to issue a harsh response. That two-thirds of Palestinians in the West Bank and Gaza Strip wanted their president to resign long before the Jerusalem announcement starkly illustrated the bankruptcy of relying on the United States to secure a Palestinian state.

As such, Abbas has used extremely harsh language in his criticisms of Trump. He has said the U.S. can no longer mediate the conflict and asked other nations to play a greater role in the peace process. Abbas’ recent visit to Moscow was part of an effort to find new intermediaries. Palestinian officials have called for the diplomatic “quartet” for Middle East peace—currently comprised of the U.S., U.N., EU and Russia—to be expanded. In January 2018, the PLO’s Central Council recommended severing ties with Israel.

However, the Central Council has made such calls before, and they have not been implemented. Security coordination between the West Bank PA and Israel continues, despite being deeply unpopular with the Palestinian public. This underscores the reality that the existence of the PA is intimately tied to a web of economic, security and logistical relationships with Israel. Severing ties with Israel is difficult because the PA exists at Israel’s pleasure.

As long as Trump remains in office—unless he walks back his Jerusalem announcement, or makes some positive statement regarding Palestinian claims to East Jerusalem—it is difficult to envision the Palestinians seriously engaging with Washington. Trump’s Jerusalem recognition has, for now, rendered obsolete the 25-year-old model of U.S.-led diplomacy on the Israeli-Palestinian conflict. For a Palestinian leadership that has been so dependent on the success of this model, this constitutes a profound crisis. The question now is whether Abbas can play a role in charting a new path for his people—despite the risks inherent in challenging the status quo.