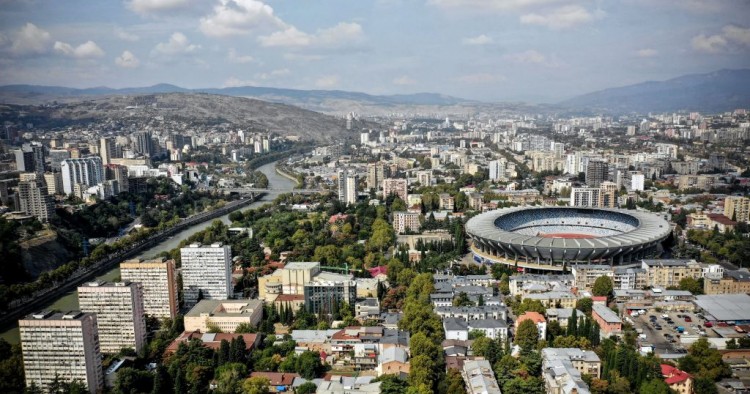 In one of the interesting turnarounds in recent years, travel flows between the Black Sea region and the Middle East have undergone a silent change. Back in the 1990s, so-called shuttle traders from Ukraine to Georgia appeared en masse in marketplaces from Turkey to the UAE. Over the years, they created informal import-export networks of consumer goods, establishing sizeable communities in Dubai and elsewhere. However, during the past decade, this southward flow of shuttle migrants was replaced by Middle Easterners heading northwards in search of promising business opportunities and alternative holiday destinations. In Georgia, this happened unexpectedly. Despite its geographical proximity and historical relations, apart from Israel, Iran and Turkey, the mainly Arab Middle East was entirely absent from the Georgian political and economic landscape. Conversely, for Arab investors and travelers it was almost exclusively Turkey that came to mind in relation to the Black Sea region.

Fast forward to 2020, and the Middle East has acquired a visible presence. In Georgia’s capital city Tbilisi, coffee shops owned by GCC natives have popped up. Gulf Arabs spend entire months on the Black Sea, in the Caucasus mountains or in Tbilisi, appreciating mild summer temperatures. Apart from Gulf Cooperation Council (GCC) nationals, foreign residents working in the oil and gas rich countries enjoy visa free access, too. For many tourists, Georgia has become a European destination within reach yet without the hassle of having to procure a visa. Many visitors come on repeat vacations. Not infrequently, GCC nationals and residents return to Georgia to scout for real estate to purchase a home away from home. The profiles of travelers coming from the GCC vary greatly. For some, Georgia is a family destination, which means that spacious hotel rooms, well-appointed furnished apartments as well as high-end luxury cars for transportation are in high demand. For young people from the GCC, Georgia is also a party destination, claiming some of the atmosphere that used to be associated with Lebanon. For white collar expats from around the globe, Georgia became an easy access, low cost destination to visit throughout the year. While Georgian sea and mountain resorts are top attractions, GCC travelers also spend considerable time and money in shopping malls reminiscent of Gulf countries. In fact, UAE and Saudi investors engaged in this line of business precisely in view of catering for their incoming GCC clientele. Likewise, GCC money poured into redeveloping the Georgian hotel landscape. The UAE’s Dhabi Group even converted the former Institute of Marx, Engels and Lenin on Tbilisi’s central Rustaveli Avenue into a five star hotel tower. On the back of tourism, an array of related economic activities developed, ranging from hospitality to retail, aviation, construction, agriculture, financial services and real estate.

Travel and tourism have underpinned economic growth. Prior to Covid-19, tourism in Georgia has been at more or less regular intervals – like other economic sectors – under sanctions or embargo by Russia for reasons of political expediency. Accordingly, market growth and diversification strategies were key to address this political threat. In terms of market growth, incoming tourism in Georgia increased threefold between 2011 and 2019 to 9.4 million international traveler trips as per the Georgian National Tourism Administration (GNTA). According to its classification, these included 7.7 million international visitor trips, i.e. either same-day travels or overnight stays, with the latter counting as proper tourism trips. Recent data by the World Travel and Tourism Council (WTTC) put the direct contribution of the sector at around 9 percent and its total contribution to Georgia’s 16.3 bn USD GDP at 26.3 percent. In terms of labor force, travel and tourism represents directly around 138,000 jobs and indirectly around 476,000 jobs - 27 percent of total employment. In addition to job creation, international visitor spending amounts to around 3.3 billion USD, which represents 39 percent of Georgia’s total export earnings. To round out the picture, Georgia’s economic growth of 4.87 percent over the last ten years has been heavily reliant on the tourism sector. In terms of diversification, Georgia’s neighboring countries still make up 71 percent of all visitor trips in 2019 according to GNTA data, with Azerbaijan and Russia accounting each for around 1.5 million, Armenia for 1.4 million and Turkey for 1.2 million trips.

The Middle East’s contribution is easily overlooked. However, given this dominance of just a handful of countries, the size and nature of Georgia’s Middle Eastern customer base is easily misunderstood.

The Covid-19 pandemic now exposes Georgia’s complex vulnerabilities. In its policy response to the coronavirus crisis, Georgia opted for an early and comprehensive lockdown in February 2020, including mandatory quarantine in designated residences for returning nationals. At the time it was hoped that this would preserve Georgia as a safe tourism destination at least for the high season during summer. This has not materialized.

For over a decade, accelerating economic relations offered splendid opportunities for both Georgia and the GCC countries. The image of cash rich investors and travelers seizing opportunities in a promising nearby country offering mutual benefits gave little reason to see potential risks. On the contrary, the wider Middle East was seen by Georgian policy makers as an important area to diversify economic and political relations beyond Georgia’s European aspirations and the country’s otherwise known geographical predicaments. During the past six months, Georgia has caught up with reality, as Georgia realized it has also become part of the periphery of the GCC rentier economies. It would be wrong for Georgia to shrink back from the situation by paying less attention to the Middle East in general and the GCC in particular. On the contrary, it is of great importance for Georgia and the GCC to navigate the current challenges of pandemics and petrodollars patiently. In the case of the Middle East, geographical proximity comes with opportunities. They must not be squandered.

Ekaterine Meiering-Mikadze is a fellow with MEI's Frontier Europe Initiative. She is a diplomat and development professional who served between 2004 and 2017 in subsequent postings as ambassador of Georgia to Jordan, Lebanon, Iraq as well as the countries of the Gulf Cooperation Council (GCC). The views expressed here are her own.