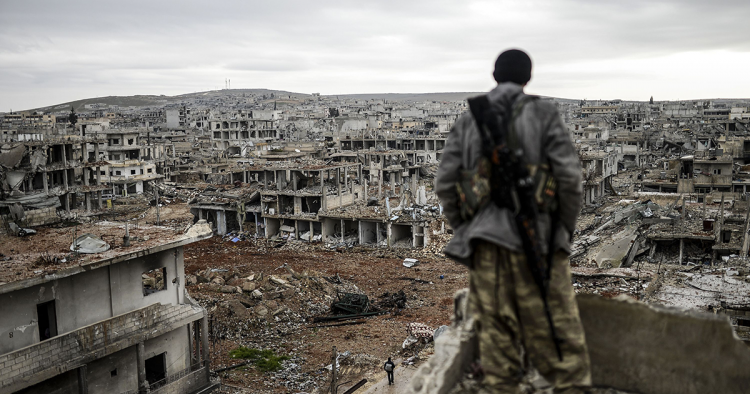 Operation Inherent Resolve (OIR) is the U.S. military’s name for the international intervention to defeat ISIS in Syria and Iraq starting in 2014. This operation was and is widely viewed as a success. Military personnel and intelligence advisers paired with the Syrian Democratic Forces (SDF) and the Iraqi Security Forces (ISF) to liberate almost 8 million people from ISIS rule.

While OIR has been a success, it has necessarily been imperfect. Throughout the campaign, cost-benefit calculations made by policymakers led to missed opportunities and possibly a longer conflict. These decisions will have lasting repercussions that could undermine the hard-won victory against ISIS, as well as the ability to partner in future interventions.

In particular, the United States mishandled its partner relationships in the war to defeat ISIS. Political considerations apparently won out against supporting and sustaining the SDF, our military partner forces. Abandoning our partners when they are no longer necessary makes our by, with, and through advising missions around the world less palatable for any future partners.

Further, the reduction of the number of U.S. personnel involved in the conflict caused serious setbacks. About 2,500 American soldiers on the ground supported the defeat ISIS fight. As the conflict matured, policymakers debated cutting the number of soldiers involved. In the campaign to defeat ISIS, the reluctance to push the required number of advisers to the front edge of combat — where their lives are at greater risk, but their efficacy is greatly increased — weakened the impact of American airpower, reduced American influence on the behavior of our partner forces, may have extended the duration of the conflict, and in some cases likely led to tactical failures and civilian casualties.

Abandonment: The case of Syria

On March 29, 2018, the Trump administration gave notice that American involvement in Syria would come to a close. The president stated, “Let the other people take care of it now." Without the usual period of careful risk-benefit analysis, this decision (later partially rescinded) would have effectively handed the U.S. mission to Turkey and exposed both Syrian civilians and the SDF to more risk. In 2019, as this reduction in forces commenced, Turkish troops moved in and threatened the Kurdish people’s stability and safety as well as the SDF forces — the major force responsible for the defeat of ISIS.

At the time of the Turkish incursion into SDF-controlled areas, the SDF oversaw detention centers holding about 11,000 ISIS militants. International leaders worried that the SDF would become so overwhelmed by the Turkish incursion that they would stop maintaining these centers. This continues to be a concern as a release of detainees could lead to a resurgence of ISIS in the region, and a potential increase in international attacks by some 2,000 foreign fighters.

There are two general approaches to advising partner forces. The first, known as Advise, Assist, and Accompany (AAA), involves helping partners plan and execute ground combat operations with side-by-side combat advisers by providing critical air support, intelligence, and medical evacuation. The less risky option is called Advise and Assist (AA), in which there is no side-by-side combat with the partner force. OIR started out as a AAA effort, but through policymaker decisions it was reduced to an AA effort.

When adviser teams try to do their jobs from a distance, they are removed from the front lines while helping to manage the fighting. The benefits of this approach include: (1) a reduction in physical risk to the advisers and thus in the political risk; and (2) greater autonomy of partner forces as they develop their own capacity and capability to keep their country or region secure over the long run.

The risk to advising from afar is the appearance of being unwilling to share risks with weaker partner forces in combat. This approach is unlikely to build the kind of relationships widely agreed to be essential to military advising success. A partner who hangs back in battle is not a partner. Advisers trying to support partner forces from afar — whether it is a few miles or tens of miles away — often have no better picture of the evolving combat situation. They are far more likely to make mistakes based on imperfect second-hand information, and mistakes in combat are often fatal. Although there is less risk to Americans, the overall risk to the mission is increased, as is, potentially, the likelihood of civilian casualties.

In early 2020, the Lobo Institute was interviewed by a research institute tasked with conducting a review of civilian casualties during the mission to defeat ISIS in Syria. One of the study’s purposes was to review how civilian casualties were affected by the composition and size of the U.S. forces involved.

Learning how to be honest and self-critical in applying the lessons learned in partner operations is important because this operation was directly in line with the 2018 National Defense Strategy (NDS), which requires the Department of Defense (DoD) to build and strengthen partnership alliances. This approach also helps free up U.S. forces to focus on near-peer competitors — China and Russia — and the rogue-states North Korea and Iran.

Fewer U.S. personnel on the ground leads to a higher risk of mission failure. It also increases the risk of more civilian casualties, which directly ties to international support for the overall security effort.

From a capability perspective, fewer members means fewer key qualified individuals doing the fighting. The campaign to defeat ISIS hinged on airpower; thus, limiting the number of joint terminal attack controllers (JTACs) along the front line likely increased the odds of errant airstrikes. Not having U.S. troops in “direct control” or within “direct supervision” of those strikes likely increased the possibility of hitting friendly forces, or even civilian targets.

From a personal security perspective, fewer U.S. personnel means troops are forced to focus on their primary duties while pulling extra guard hours for security. Over time these dual requirements can exhaust the troops — a critical factor when fighting for weeks and months on end. Additionally, with fewer American personnel committed, the duration of a conflict is prolonged.

Policymakers should decide on the operational paradigm for a conflict effort. They need to determine the approach that will be used: a unilateral approach or a partnered one. It should be the responsibility of the ground commander to set the number of personnel required. Specific assets should also be left to the commander who is fighting the fight and who has the most knowledge on how to win.

Two organizations well versed in this balance are the U.S. Special Operations Command in the DoD and the Special Activities Center in the CIA. Both organizations are designed to operate with minimal support personnel and have shown that they can beat significant enemy forces by providing increased capabilities to partner forces. This Tactical Advantage Approach is often the most effective, limits the number of U.S. personnel at risk, and is driven by the commander’s assessment.

The Irregular Warfare Annex to the NDS calls on the DoD to utilize its considerable irregular warfare capabilities against near-peer competitors and rogue-state actors as well as terrorist organizations. In Syria, Russia and Iran support the Syrian regime while contesting the battlespace with U.S. forces and partners. U.S. forces operate under the 2001 Authorization for Use of Military Force against al-Qaeda and its affiliates to include ISIS. However, in a few instances, U.S. forces used self-defense authorities against Russia and a near-peer adversary.

Russia’s approach in Syria mirrors the U.S. Irregular Warfare Annex. It calls for an all-of-government approach, including using irregular warfare to advance Kremlin interests. Under these doctrines, the very “rules of war” have changed, and so has the “battlefield.” An example of this in Afghanistan is Russian intelligence officers paying bounties to Taliban militants to kill U.S. personnel. Another example is the four-hour battle in the Deir ez-Zor governorate in Syria in February 2018. In this battle, U.S. forces killed over 100 Russian and Syrian forces.

Based on Russia’s recent aggression, U.S. policymakers must take note when deploying personnel in proximity to near-peer forces. Due to Russia and other U.S. near-peer competitors’ capabilities, policymakers and military commanders must be ready for confrontations. Decisions to limit supporting assets carry exponential risk to both mission and force. Thwarting an ISIS rocket-propelled grenade (RPG) attack is easier than preventing an attack by a near-peer attack helicopter or sophisticated jet.

Conclusion: Where do we go from here?

The Tactical Advantage Approach that was used in Syria must be followed in the future, especially as we look to redistribute our forces in line with the NDS. The actual numbers of forces on the ground should be determined by the commander on the ground with input from the senior diplomat and intelligence officer for the region. When Washington-based senior policymakers restrict and dictate the number of personnel and assets to the ground commander, it only increases the risk to force and the civilian population, as well as the potential risk to the overall operation.

Michael “Mick” Patrick Mulroy is a former Deputy Assistant Secretary of Defense for the Middle East, a retired Paramilitary Operations Officer in the CIA’s Special Activities Center, and a retired U.S. Marine. He is the Co-director of the Yemen Steering Initiative and a Non-Resident Senior Fellow for National Security and Defense Policy with the Middle East Institute, an Analyst for ABC News, Co-founder of End Child Soldiering and the Lobo Institute, and serves on the board of directors for the Grassroots Reconciliation Group.

Eric Oehlerich is a retired U.S. Navy Commander (SEAL) from the Naval Special Warfare component of the USSOCOM’s Joint Special Operations Command. He is a Non-Resident Senior Fellow for Technology and National Security with the Middle East Institute, an Analyst for ABC News, Co-founder of End Child Soldiering and the Lobo Institute, and serves on the board of directors for the Grassroots Reconciliation Group.

Michael "Walton" Mulroy is an intern at Lobo Institute and an undergraduate student at the University of Montana studying Political Science with a concentration in International Relations & Comparative Politics. He is also in the U.S. Marine Corps Reserves as a Reconnaissance Marine at 4th Force Reconnaissance Company, Alameda, California. He previously interned in the U.S. Senate and had the privilege of attending schools in Athens, Greece, Nairobi, Kenya, and Kampala, Uganda. The opinions expressed in this piece are their own.