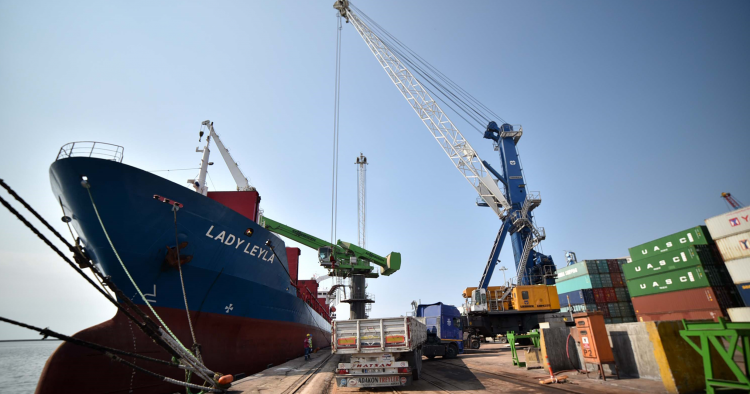 Following the devastating explosion that rocked Beirut on Aug. 4, one of the first foreign state dignitaries to visit Lebanon to pledge support was Turkish Vice President Fuat Oktay. Oktay said that not only would Turkey help to rebuild the damaged port and the surrounding buildings, but it could also provide temporary support in the form of linking Turkey’s largest Mediterranean port, Mersin International Port, with the Port of Beirut. This would allow goods destined for Beirut to be ferried to Mersin on container ships and then forwarded to Beirut on smaller vessels, i.e. those small enough to anchor in the damaged port even before it is rebuilt.

Rebuilding the Port of Beirut will be a significant undertaking and the tender process will be highly competitive, involving several major actors other than Turkey, including France, which expressed an interest during President Emmanuel Macron’s visit to Beirut. Rebuilding will take time, however, and maintaining some functionality at the port until the project is completed will be critical as Lebanon depends on it to import vitally important goods, like wheat, medicine, and construction materials. The country’s other major port, Tripoli, can offer only a partial solution as its capacity is just one-third of Beirut’s. While anyone with the resources can rebuild the port, only Turkey can help establish and maintain a lifeline to the port in the interim, as other alternatives in the eastern Mediterranean are either too far away or politically unfeasible. It is geography that makes Turkish ports the best option for supporting the Port of Beirut.

The idea is economically practicable. To begin with, it is only 191 nautical miles between the two ports. In addition, Mersin is a major hub in the eastern Mediterranean and has a total design capacity to handle 2.6 million twenty-foot equivalent units (TEU) per year. According to data from Turkey’s Ministry of Transport and Infrastructure, the port processed a total of 1.86 million TEU in 2019, which means there is spare capacity, part of which can be used for forwarding freight to Beirut. In the meantime, another Turkish port, Limakport in Iskenderun, has also expressed interest in taking part in this project. It has a lower capacity — 1 million TEU in total with 680,000 TEU processed last year — but is closer to Beirut (167 nautical miles).

If and when this project materializes, it will certainly bring economic benefits in the short term for both sides. However, from a Turkish perspective, it can also offer benefits in the longer term, in three different ways.

First of all, as Turkey’s assertive posture over energy exploration in the eastern Mediterranean continues to be challenged by a bloc comprising Greece, Egypt, Israel, and Cyprus, a mutually beneficial undertaking with Lebanon can help strengthen Ankara’s hand, particularly at a time when Lebanon itself is having a significant disagreement with Israel over exclusive economic zones. The geopolitics of the eastern Mediterranean is as much about ports as it is about oil and gas, and directly connecting one of the largest Turkish ports with Lebanon can mean increasing influence for Ankara over maritime routes in the northeastern Mediterranean.

Secondly, a strong Mersin-Beirut connection that will continue to function after the rebuilding of the Port of Beirut can help Turkey to diversify its export routes into the Middle East and reduce its dependence on the Israeli Port of Haifa. The biggest difficulty Turkey faces when it comes to the economic aspect of its Middle Eastern policy is that the export routes to the region are blocked: The gates to Syria are closed to trade, Iraq is still too dangerous and hence too costly, and Iran offers a longer route toward other Middle Eastern markets but there are technical problems as well, mainly due to sanctions. Roll-on/roll-off (ro-ro) connections between Turkish and Egyptian ports had proven to be efficient, but they were later cancelled due to the political issues between Ankara and Cairo. Weekly ro-ro services from Mersin to Haifa offer the best option for Turkish exporters for the time being, and having disembarked from the ferry in Haifa, container trucks can easily travel to Jordan and beyond to the markets in the Gulf. A strong connection established between Mersin and Beirut today can offer not a substitute, but a powerful complement in the future, when the rebuilding of the Port of Beirut is completed.

Finally, the Mersin-Beirut connection can also be a decisive factor in shaping Turkey’s economic involvement in post-conflict Syria in the long run. While the distance between Mersin and Beirut is 370 miles by land, freight transportation is not possible since Turkey’s borders with Syria are closed to trade. As the conflict deescalates, however, Turkish exporters are pressing for changes, arguing that carrying freight between Mersin and Beirut through Syrian territory is likely to be possible soon. Hatay’s local politicians and business circles assert convincingly that of the two border crossings connecting Turkey with Syria through Hatay, the Yayladagi crossing can be opened to trade as it connects with Latakia, where the situation is relatively peaceful. It is still too early, however, for the Cilvegozu crossing, which connects with Aleppo and Idlib, where the security situation is far from favorable. The land route can complement the maritime route between Mersin and Beirut, while also involving Syria and contributing to Turkey’s economic role in its future. While big powers like Russia and China are likely to take the lead in Syria’s reconstruction, the process will require secure and continuous supply of construction materials, food, and other necessary goods, which is best handled through Turkey.

A temporary lifeline between the ports of Mersin and Beirut can be expected to generate longer-lasting benefits for Turkey in the long term. The economic rationale is clear and the business community is ready and willing, but the most important prerequisite will be delicate regional diplomacy, which might also prove to be the most difficult.

Altay Atlı is the founder and managing director of Atlı Global, an Istanbul-based advisory firm providing consulting and executive training services on international markets, global affairs, and political risk. He is also a lecturer with the Asian Studies program at Boğaziçi University and a Non-resident Scholar with MEI’s Turkey Program. The views expressed in this piece are his own.