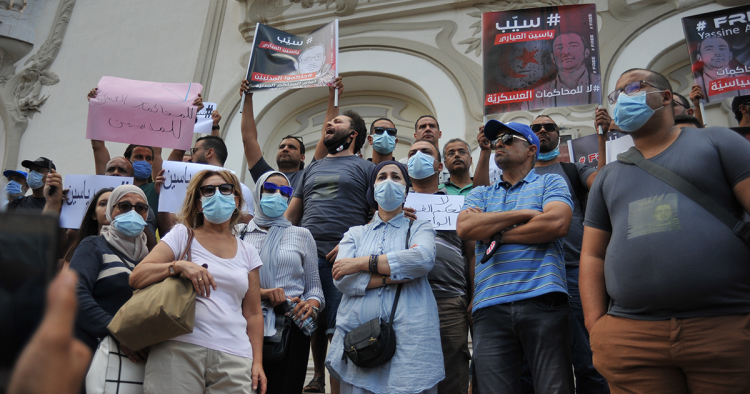 2022 has begun just as 2021 ended: with house arrests and extra-judicial detentions.

Dec. 31 saw the disappearance and remanding of former Justice Minister and Ennahda MP Noureddine Bhiri to an unknown location before being placed under house arrest and then taken to a hospital in Bizerte on Jan. 2 for severe health problems. Like others opposed to Tunisian President Kais Saied, he resorted to a hunger strike, but this has worsened his health to a critical state. This was the first disappearance of a high-profile political figure since Saied’s power grab on July 25.

Bhiri’s disappearance and detention is only one in a long series of arrests, house arrests, and rapid civilian and military court actions, including the conviction and sentencing in absentia of former President Moncef Marzouki. It also marks the return to a presidential style akin to that of both Habib Bourguiba and Ben Ali, who brutally put down their political opposition through arbitrary detentions, trials, and torture.

Since July 25, President Saied has used emergency powers and military courts to arrest, detain, and incarcerate in the name of cleansing the nation of corruption and restoring social peace, but his actions have been heavily criticized by human rights organizations and have undermined Tunisia’s image as an emerging democracy founded on the rule of law.

When Saied invoked Article 80 of the 2014 constitution on July 25 and assumed total executive control of the state, he declared a war on corruption, promising his followers swift and decisive action against the corrupt and those that he said endangered Tunisia.

Rather than recruit an army of forensic accountants, auditors, and specialized police investigators to bring these corrupt wrongdoers to book through the courts, which would take a significant amount of time, he passed the baton to the Ministry of Interior to use executive orders under the state of emergency and old colonial laws to carry out a highly mediatized campaign of house arrests and trials in military courts.

Following the freezing of parliament and sacking of Prime Minister Hichem Mechichi, Saied appointed one of his security advisors, Ridha Gharsallaoui, as the interim minister of interior on July 29, and from then on the campaign of arrests, detentions, and house arrests began in earnest.

One of Saied’s first targets was Judge Bechir Akremi, who was placed under house arrest on July 31 on charges that he had hidden files pertaining to terrorism and the 2013 assassination of MP Chokri Belaid. Activists had long accused Akremi of being corrupt and close to the moderate Muslim democratic party, Ennahda, which has strongly denied any such connections.

This was followed by the rather surprising arrest of Chawki Tabib, the former director of the national anti-corruption authority, which was set up to investigate and fight corruption in 2011. Initially an investigation into alleged "suspicion of fraud and use of forgery" was opened, but it was Gharsalloui who decided to place Tabib under house arrest. Despite the detention Tabib spoke out vehemently against what he said was an injustice and subsequently filed a complaint against the state and then later publicly declared the origin of his wife’s wealth that was in question.

Gharsallaoui’s brief stint as minister of interior seemed to be characterized by vengeful chaos. In addition to this series of house arrests, Saied imposed travel bans on certain people that he believed were potentially corrupt. This led to chaos at the border in Carthage as there was no definitive list of suspects, just lists of occupations, such as MP or business person, that would be flagged on scanning the passengers’ passports. In reality the flaggings were arbitrary and many people missed their flights as confused border guards waited for clearance to release or detain flagged passengers from the Ministry of Interior.

By September leading human rights organizations including Human Rights Watch and Amnesty International had published reports denouncing Saied’s use of arbitrary arrests and detention, as cases of house arrest alone numbered at least 50. Ten house arrestees lodged appeals, which were later rejected by the Administrative Court.

Saied’s use of executive orders from the state of emergency laws, as defined by a presidential decree authored by President Bourguiba back in 1978, shows him not to be a visionary reformer with a thirst for justice and change, but simply a vain man repeating the mistakes of both Bourguiba and Ben Ali.

Bourguiba declared himself president for life in 1975 and first used these executive orders to suppress the Tunisian General Workers’ Union (UGTT), which rebelled against his attempt to control its executive. The decree gave the security services the power to detain and control, and restrict the movement of those engaged in “activities deemed to endanger security and public order.” Beji Caid Essebsi, Tunisia’s president from 2014 through 2019, invoked the state of emergency again in 2015 following the terrorist attack on a museum and beach resort in Sousse.

Since 2011 human rights organizations and OHCHR have both monitored and criticized the use of house arrest, which is a form of arbitrary detention. Unfortunately, Tunisia’s lack of stability and seeming inability to make radical changes to its Ministry of the Interior and police force have seen numerous rollbacks toward authoritarian-style laws, such as the draft of a new state of emergency law first tabled in 2019, which Amnesty International said would have pushed back human rights to pre-2011 days.

A new draft appeared in October 2020 when the International Committee of Jurists’ MENA program director, Said Benarbia, warned the latter draft “would entrench the President’s power to unilaterally determine what constitutes an emergency on broad grounds.” This is more or less what happened on July 25, because although Tunisia was facing economic difficulties and the Delta variant wave of COVID, there was not one thing that would constitute a catastrophic “imminent threat” to Tunisia and warrant the use of executive powers of detention.

Along with house arrests, the international community, most notably the U.S. Congress, voiced concern about the prolific use of military courts to try civilians. On July 29 Saied lifted the immunity of MPs such as Yassine Ayari. A day later some 30 security officers dragged Ayari from his home, and he was later sentenced in a military court to two months in prison on an old charge of criticizing the military. Ayari was due to stand trial again in a military court for defamation against Saied on Nov. 22. Due to health problems, he traveled to France to get medical treatment, but now finds himself effectively living in exile there.

Arrests of members of the Islamist party al-Karama followed, including MP Nidhal Saudi and party leader Seifeddine Makhlouf, both regular critics of the president. Ennahda has borne the brunt of public hatred, but it is the Salafist-linked al-Karama that has suffered arrests. Until Dec. 31 and Bhiri’s arrest Saied did not show sufficient hubris to arrest members of the still powerful Ennahda, even though, in terms of popular politics, they are low-hanging fruit. Al-Karama MP Maha Zid was hounded by the police, who raided his house and interrogated his children. Zid is charged with defamation and theft of papers pertaining to the assassination of Chokri Belaid.

It should be noted that amid what seem to be politically motivated arrests there have also been highly mediatized arrests of traffickers and of those who could credibly be charged with actual fraud and corruption. This was seen in Sousse when 18 accountants were arrested on allegations of financial crimes, supporting Saied’s image as an anti-corruption warrior, but given his flagrant lack of interest in tackling social and economic issues head on, Saied’s credibility as anti-corruption campaigner has worn thin.

Saied’s election campaign image as an independent lawman with an eccentric, awkward manner earned him the nickname “Robocop,” a cartoon moniker for a populist president. As his regime progresses, with his barking outbursts that those under house arrest should “all be in prison” and constant battles with the judiciary, his approach to law and order is more DC Comics than serious politician.

Without a doubt corruption has been a serious problem that has blighted Tunisia both under Ben Ali and in the post-revolutionary era over the past 11 years. Saied wanted to put on a show to reassure a nation exhausted by corruption and political inaction. However, there has been no talk of real solutions to corruption, nor about upgrading technology or capacity to investigate serious financial crime or those relating to graft, trafficking, or fraud; instead, he just sends in his men to get the “bad guys.”

On Sept. 22, Saied issued his most significant decree, No. 117, in which he gathered the nation’s executive, legislative, and judicial powers in his hands. This effectively made him not just the “the system,” as Bourguiba had jovially declared himself to be, but like the DC Comics character Judge Dredd, Saied “is the law.”

And being “the law,” Saied is not mindful of international human rights laws, let alone considerate of long-term relationships and financial support from Tunisia’s current major donors, which base their support on the country continuing on the democratic path and respecting the rule of law and human rights. This causes problems for agreements such as the 2020 military cooperation deal struck with the U.S., and Congress has been continually critical of Saied’s human rights transgressions. Saied’s behavior and the lack of legitimacy of his government have put Tunisia in economic limbo, with donors standing back and adopting a watch-and-wait policy.

The cases described feature public figures with the means to pay for good lawyers and the connections and visibility to gain support from human rights organizations, but those of lesser-known bloggers and ordinary people go unreported and unsupported except for vigilant lawyers who take them on pro bono. Last November, in the western region of El Kef, which borders Algeria, there were six arrests for defamation and one man incarcerated, all for Facebook posts criticizing Saied. The charges of defamation originate from chapter 4 of the 1913 penal code on attacks against state authorities and mandate a year of prison and a fine. Saied has repeatedly denied that anybody has been imprisoned for criticizing him, but many of those arrested for doing so are ordinary citizens whose only platform is Facebook.

One Tunisian association, Bloggeurs sans Chaines, has been fighting such cases of defamation for many years, but noted that they have increased since 2019 when Saied came to power and that although there had previously been defamation cases brought by the security and military services, prior to Saied criticizing a president had not been a serious issue.

With these arrests and reports from anti-coup campaigners and the warrant issued for the arrest of former President Moncef Marzouki, it seems that Saied’s campaign to eliminate and discredit his opposition is only likely to continue.

Elizia Volkmann is a British freelance journalist based in Tunis covering Tunisian politics, social and economic issues, as well as the wider Maghreb and Euro-med region. The views expressed in this piece are her own.