The progressive case for staying in Syria, for now 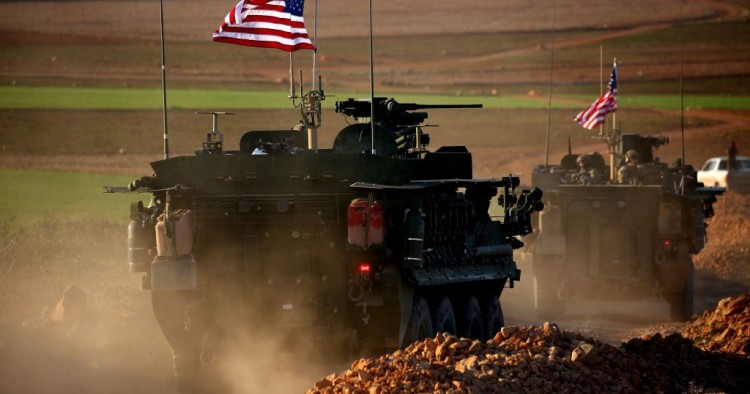 “My family packed their belongings after Trump’s tweet … and prepared for displacement,” said Abdul Muin, an activist from Shheel, Deir Ezzor, referring to President Donald Trump’s December 2018 tweet announcing the imminent withdrawal of U.S. forces from northeastern Syria. His family and many others in areas now under the control of the Syrian Democratic Forces (SDF) were preparing to flee north due to the expected advance of Syrian regime forces. Others in Deir Ezzor rushed to stock up on weapons, to fend off a possible regime advance or attacks from ISIS cells that would likely exploit the impending chaos. The Pentagon and State Department have since been able to slow the pace of withdrawal of U.S. troops and are looking for replacements from Coalition nations to ensure the SDF-controlled area remains protected from both a regime takeover or a Turkish invasion.

The destruction of ISIS’ self-proclaimed “caliphate” should prompt a reassessment of what the U.S. presence in this region can and should seek to accomplish. Ideally, the various sides of the Syrian civil war would seize the opportunity to reach an agreement paving the way for the establishment of a government able to protect and care for all of the country’s citizens. However, the Assad regime’s current intransigence and inability to effectively counter ISIS necessitate continued U.S. protection of northeastern Syria and efforts to stabilize it until such a deal can be made. This is not an ideal scenario, but the cost of a pullout at this stage will be immense.

The Obama administration attempted to avoid entanglement in the Syrian civil war, but ISIS’ atrocities and rapid territorial expansion compelled the U.S. to provide air cover to the People’s Protection Units (YPG) Kurdish militia fighting the group. Later, the U.S. dispatched a small contingent of forces to northeastern Syria to help the SDF, established by the YPG’s leadership, retake ground from ISIS. These troops now combat ISIS cells that continue to operate in the region. The U.S. and partner countries are also providing (limited) support to help build up the capacity of the SDF’s civil administration so it can stabilize the area and assume responsibility for establishing governance, security, and service provision in a way that could serve as a model for the future of Syria.

The costs and benefits of remaining in Syria

The linkage now made by some Trump administration officials between protecting northeastern Syria and countering Iran has naturally made progressives uneasy about what seems like an open-ended commitment to maintaining a presence in the region. Some have even explicitly called for a U.S. withdrawal. The benefits of such a move, however, would be limited. Indeed, it would likely destabilize the region, lead to mass displacement, provide opportunities for an ISIS resurgence, and greatly undermine a core progressive value: protection of human rights.

To the contrary, even a limited U.S presence will stabilize the area and allow the fight against ISIS sleeper cells to continue. Keeping the northeast out of the current regime’s hands will also ensure that suspected members of ISIS are held by forces that will not release them to achieve political goals, as the Assad regime did with jihadists in its prisons during the Iraq War and in 2011, following the outbreak of the Syrian uprising. Such a presence will also signal America’s commitment to an allied force that lost over 11,000 fighters in the fight against ISIS, bolstering faltering U.S. credibility in the region.

The fate of northeastern Syria if the US withdraws now

Most importantly, perhaps, to progressives this protection would prevent the grave human rights abuses that would otherwise await the millions of Syrians living under SDF control upon the return of the Assad regime or a Turkish invasion. Damascus has been unwilling to offer any form of autonomy for the Kurds or the other communities of northeastern Syria. “They are demanding that we surrender,” a high-ranking Kurdish official involved in negotiations with the regime told me. Syria’s south, recaptured by the regime in part through “reconciliation” deals, the same option now being offered to the SDF, is a telling example.

Since southern Syria “reconciled,” hundreds of residents have been arrested and disappeared into the regime’s industrial-scale complex of prisons. Some have already been tortured to death. Refugees who have returned to the area, despite “reconciling” beforehand, have been arrested. The Russians, involved in the negotiations with southern rebels and now with the SDF, provided guarantees to rebel commanders who cooperated with them. Some “cooperative” factions were allowed to keep their light weapons and maintain a form of highly circumscribed local autonomy, while others who joined the regime’s ranks have been arrested or assassinated.

Conversations with locals during my recent visits to northeastern and eastern Syria indicate that many of them would attempt to flee to Iraqi Kurdistan if the area was to fall into the hands of the regime, especially those linked to the YPG and civilian administration, Kurdish and Arab anti-regime activists and fighters, and those who have cooperated with the U.S. government such as NGO employees. Some ordinary civilians, particularly supporters of Kurdish autonomy and linguistic rights, would try to flee as well — they vowed never to accept living without basic cultural and national rights, as they did under the Ba’ath regime. Such mass flight would precipitate a major humanitarian crisis and destabilize the Kurdistan Regional Government, which is already dealing with large numbers of Syrian refugees and Iraqi internally displaced people.

For its part, Ankara has repeatedly threatened to invade northeastern Syria to deal with what it perceives as the threat emanating from an area under the control of the Democratic Union Party (PYD), the Syrian branch of the Kurdistan Workers’ Party (PKK), a Kurdish guerilla group operating in Turkey. The removal of U.S. protection from the northeast may precipitate such an invasion. The Turkish operation against the YPG in the once Kurdish-majority Afrin resulted in mass displacement, demographic change, and daily human rights abuses. All of the major Kurdish population centers in Syria are located along the Turkish border, and civilians there, including strident opponents of the PYD, told me they would take up weapons to fight such an invasion.

Retreating from the northeast would mean forfeiting U.S.-backed forces’ control of a third of Syria’s territory and 80% of its natural resources, eliminating what little leverage America has left in shaping the post-war landscape. The Assad regime, even at its weakest point, was unwilling to seriously negotiate with the opposition. Now that it feels confident and victorious, it is much less likely to accede to any Western demands to reform or step down. However, with time, its calculus may change. Maintaining sanctions against the regime (and quickly adapting them as it manufactures new, “clean” personalities to get around them) coupled with a medium-term American presence in the oil-rich northeast may create internal fissures within its senior ranks. The West could exploit such instability to press for reforms to the central state and in particular, provide for some form of federalization, which would benefit all Syrian communities.

Allowing the Assad regime to remain in power without substantive reforms will ensure that millions of Syrians will not return home willingly, and the millions who have stayed behind will continue to live in the shadow of a police state that is paranoid, corrupt, and ultimately weak — unable to put an end to ISIS (and rebel) insurgency in areas nominally under its control.

A progressive policy for Syria should place great importance on the emergence of a pluralistic system in the northeast. U.S. policy to date, conducted largely through the Department of Defense, focused on countering ISIS and has not prioritized pluralism and real political empowerment of the region’s communities. Such a system would protect inhabitants’ human rights, allow for the return of refugees — some of whom are not returning due to the draft instituted by the SDF and fear of political persecution — and serve as a clear alternative to the Assad regime.

The limited benefits of a pullout

At present, a U.S. pullout offers few benefits. While the U.S. presence in Syria exposes American forces to a greater risk of ISIS attacks, maintaining them in the northeast will hinder ISIS’ ability to reconstitute itself. Eastern Syria, and particularly Deir Ezzor, has been a major reservoir of local ISIS recruits. Recent interviews with people from across Deir Ezzor indicate that the group continues to enjoy some support in rural areas, providing a sanctuary and base for operations.

A U.S. withdrawal may reduce tensions with Iran, but U.S. willingness to normalize relations and afford it a sphere of influence in the region during the Obama administration only produced greater Iranian expansionism and human rights abuses, particularly in Syria. A U.S. withdrawal will satisfy Ankara, but the utility of a close relationship with an increasingly anti-Western and authoritarian President Recep Tayyip Erdogan for U.S. national security is questionable. Political reform that would reduce the PYD’s dominance in running northeastern Syria will also help assuage Turkish fears about the region’s autonomy.

The history of U.S. support for rebel groups in civil wars is largely one of failure, and countering every major human rights violation with military intervention would lead to endless wars. However, having intervened in Syria, the U.S. has both leverage and a responsibility. The U.S. can utilize its leverage to pressure the Assad regime to institute reforms that would benefit all Syrians. Progressives should recognize America’s moral responsibility to protect those who fought to clear ISIS from large swaths of Syria, and would be trampled by Turkey, the Assad regime or both, were the U.S. to remove its protection from the region.

Elizabeth Tsurkov is a Research Fellow at the Forum for Regional Thinking, an Israeli-Palestinian think-tank, and a doctoral student at Princeton University's politics department. The views expressed in this article are her own.