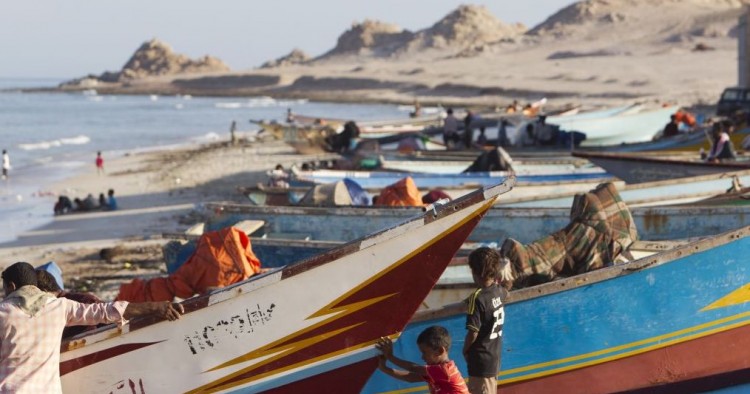 On April 30, roughly a week after the Southern Transitional Council (STC) declared self-administration in Aden, a military confrontation broke out on the remote Yemeni island of Socotra between members of the STC and government forces. After just a few days, the situation was diffused when the island's governor and the STC asked the Saudis to intervene. Although an agreement was reached quickly, it is likely to be fragile because the causes of the conflict are not entirely local. The island of Socotra is simply too important to multiple international players that are not willing to let it easily slip outside their sphere of influence.

Two years ago, there was a very similar escalation when Emirati armored personnel carriers arrived on the island, sparking a crisis between the internationally-recognized government of President Abed Rabbo Mansour Hadi, based in Riyadh, and the United Arab Emirates (UAE). Following the vehicles’ landing, Hadi's government immediately accused the UAE of taking "unjustified military action" and submitted a complaint to the UN, which described the Emirati action as a "violation of Yemen's sovereignty." Although the UAE announced its withdrawal from Yemen last year, it still maintains its sphere of influence through its support for the STC, a situation that complicates political dynamics on the island, which has been largely viewed as peaceful and apolitical.

The conflagration between the two allies in the fight against the Iran-backed Houthi rebels was sparked by the broader regional competition between the UAE and Turkey and Qatar, as well as domestic tensions between the Hadi government and the STC. It was only defused with the intervention of the Saudi government. While the UAE is backing the STC, both Turkey and Qatar wield significant influence over the Islah party, which is often identified as a Muslim Brotherhood affiliate by its adversaries.

Every day, over three million barrels of oil travel from the Gulf to the Mediterranean Sea. Ships navigating this route travel westward through the Arabian Sea into the Gulf of Aden, then turn north, entering the Red Sea via the narrow pass at Bab el-Mandeb before proceeding on to the Suez Canal. The Socotra archipelago occupies a critical strategic position en route to Bab el-Mandeb, the most vulnerable chokepoint on this key energy transit corridor. Socotra's central location also makes it an ideal launch point for interdicting pirates and smugglers.

For years, international and regional powers have scrambled to establish bases around the Horn of Africa. Socotra, like the rest of the region, has become a hotbed of geopolitical competition. Iran, Somalia, Eritrea, India, Qatar, and the UAE have all attempted to gain a foothold on the island. In this competition, however, the UAE holds a clear advantage. Abu Dhabi enjoys strong historical, familial, and cultural ties with Socotra. The island’s governor, Ramzi Mahroos, vehemently rejects the STC, and maintains support from Islah and government loyalists on the island opposed to the UAE’s influence. However, many Socotrans, who consider themselves southerners, cheer the UAE's backing for the STC, which supports autonomy for South Yemen (or as the STC calls it, South Arabia). Abu Dhabi further cemented Socotrans’ goodwill when, in 2015, it spearheaded aid and reconstruction efforts after locals’ homes were hard hit by the cyclones Chapala and Megh. It continued to provide assistance thereafter, including flying residents of the island affected by the 2018 cyclone Mekunu to the UAE.

The UAE's former military presence on Socotra training local Yemeni forces dovetails with its efforts to build a string of friendly ports along the Horn of Africa, such as its base at Berbera in Somaliland, military and naval bases at Assab in Eritrea, and training facilities in Puntland, Somalia. From a strategic standpoint, Socotra would provide a link between these regions and enable the Emirati navy to conduct anti-piracy operations and interdict Iranian dhows running weapons to the Houthi rebels. But the UAE's expansion into the Horn of Africa has put it in direct competition with Turkey, which has its own designs on the Gulf-Mediterranean Sea route. Since 2017, Ankara has stationed 3,000 troops in Qatar and has also signed an agreement with Sudan to rehabilitate and use the Ottoman-era port of Suakin.

While there has been considerable speculation around the UAE’s potential use of Socotra as a military base, experts point to logistical issues that would make this extremely challenging — namely the island’s climate, which makes it difficult to operate for six months of the year due to the monsoons. A number of reports have also emerged about the UAE’s plans for tourism on the island, which would pose a problem to its unique ecosystem and accelerate the loss of biodiversity.

The UAE and Turkey’s interests have collided in Somalia. Turkey has built strong economic, political, and security ties with Somalia over the past decade, following the reopening of its embassy in Mogadishu and a visit by then Prime Minister Recep Tayyip Erdogan in 2011. Relations between Abu Dhabi and Mogadishu have focused on the security sphere, and the UAE began training Somali troops after signing a military cooperation agreement in 2014. But relations soured after Somalia refused to join the boycott against Qatar in 2017 and subsequently confiscated millions of dollars from an Emirati plane in early 2018. Immediately after Emirati forces withdrew, Turkey sent additional troops to Mogadishu. Given the ties between Ankara and Mogadishu, the Emiratis suspected Turkey's hand behind the Somali decision not to support the boycott — although the UAE's port agreement with Somaliland, which Mogadishu considers a breakaway province, probably did not help matters either.

After the Emiratis’ departure from Somalia and involvement in Yemen, Ankara appeared uncomfortable with the UAE’s presence on Socotra and criticized its militarization of the island. Growing tensions between the Hadi government, which fears southern secession and is struggling to exercise control over political and military forces in the South, and the Emirati-backed STC provided Turkey with an opportunity to drive a wedge between Hadi and Abu Dhabi. In this endeavor, Turkey, which described the Emirati deployment as "a new threat to the territorial integrity and sovereignty of Yemen," was in perfect alignment with Qatar, which promoted narratives of the UAE's exploitation of the island and "occupation" on its news channel.

With the Saudi and Emirati boycott preventing Qatar from transporting goods overland or entering Saudi, Bahraini, or Emirati airspace, Doha signed a sea trade transport agreement with Ankara and Tehran in late 2017. Turkey has since sought to maximize its influence by talking behind the scenes to members of the Islah party, a majority of whom reside in Turkey. The minister of transportation, Saleh al-Jabwani, announced a deal with Turkey allowing the country to operate sea ports and airports during his visit to Ankara late last year. However, the Riyadh-based Hadi government was embarrassed by the announcement and swiftly issued a denial through its official news agency SABA, emphasizing that Jabwani’s “irresponsible” actions were his own and did not represent the views of the government. The ability of Hadi government representatives to pursue their own political party interests without consulting with the prime minister is bound to make both the Saudis and Emiratis uncomfortable and may prompt them to seek greater dominance and hegemony over Yemen.

Unfortunately, Doha squandered any goodwill it might have had with the island's residents after promised reconstruction aid failed to materialize following the 2015 cyclones. To make matters worse, what little relief did arrive was distributed through the Islah party. Islah has a complicated history with Yemen's South, but it still holds significant weight within Hadi's government. However, the net effect of Doha's missteps and inability to fulfill its promises to the island’s residents poisoned Qatar-Socotra relations.

Unable to control Socotra directly, the Qataris and Turks, through the Islah party, could at least try to push the STC, which they consider an Emirati proxy, out of the picture. But the Turkish-Qatari axis continues to underestimate the extent of local opposition to the Hadi government. By and large, Socotrans are far more favorably disposed to the STC and the UAE than to Hadi's government, which they view as corrupt. Moreover, many Socotrans were granted Emirati citizenship in the past couple of years. This move could sway residents of the island, who have been historically marginalized and neglected by successive Yemeni governments, as well as by most political elements within Yemen, to become completely aligned with the UAE. The increasing naturalization of Socotrans and lack of services on the island present challenges that will pose a significant threat to Yemen’s future.

Saudi Arabia appears to be acutely aware of the geopolitical conflicts, which it has sought to de-escalate through the November 2019 Riyadh Agreement between the Hadi government and the STC. However, in a geopolitical struggle that aims to weaken Saudi Arabia’s economy and military position, it is more than likely that the Saudis will side with their long-term ally, the UAE. This is part of the reason why they have maintained a favorable tone toward the STC, despite Hadi’s opposition.

Ultimately, through de-escalation and mediation with the STC, the Saudi government is offering Hadi a face-saving compromise. At the request of the president-in-exile, Riyadh dispatched its own forces to the island, thereby symbolically upholding Hadi's claim to stewardship over Socotra as the legitimate government of a united Yemen. The move was also a victory for the STC, whose forces are entrenched on the island and will remain there. But while the Hadi government's dependence on Riyadh gave the Emiratis the upper hand, it is unlikely that the matter is settled. Socotra is still a prize, and Turkey and Qatar — as well as Iran — still have a vested interest in pushing out Emirati and Saudi influence.