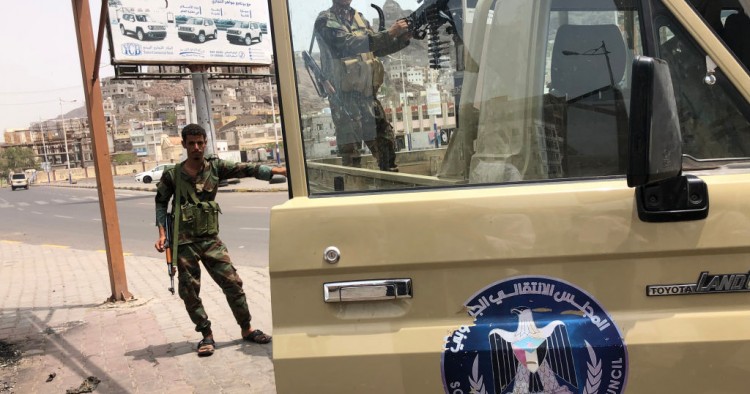 After violent confrontations with the government of Yemen and repeated struggles for autonomy, members of the Southern Transitional Council (STC), which represents a political movement that calls for secession, appeared satisfied with the terms of a deal that will be signed with the government of Yemen in Riyadh on Oct. 31. The Saudi-brokered agreement united the conflicting parties in their fight against the Iran-backed Houthis, with a strong vision aimed at stopping any side-show that could endanger this effort.

The deal recognizes the STC as a political entity, which is a welcome change for the group as the state and its loyalists have vilified it in the aftermath of recent clashes in South Yemen. The STC will be part of Yemen’s government delegation in its political pursuit of a solution to end the Houthi problem. The STC’s inclusion is a significant departure from the government’s former position, in which it refused to acknowledge the movement altogether. Nevertheless, considerable work will need to be done to foster trust between the parties, which is the major issue threatening the implementation and durability of the deal.

The parties went into this agreement with different intentions. For the Saudis, their mediation was meant to set aside any political or military disputes until after the conflict with the Houthis is resolved. For the government of Yemen, it aimed to reinforce its authority over southern lands after facing violent confrontations and loud calls for disunity. As for the STC, its objective was twofold: first, to be seen as a legitimate Yemeni political force worthy of respect, and second, to open diplomatic channels with Saudi Arabia that would grant it the same privileges and access that Yemen’s government has with Riyadh.

The relationship between the STC and the government of Abed Rabbo Mansour Hadi has been challenging and confrontational. Since the start of the Saudi-led intervention in Yemen, and the exile of the Hadi government to Riyadh in 2015, the STC has emerged as a potent political player in the south of the country, filling a vacuum and organizing southerners for a political cause. The STC built on a sense of communal nationalism birthed out of the previous Hirak secessionist movements, and gradually established significant political and military discipline, thanks to its Emirati backers, who funded and facilitated the group’s rise to power. Seeing itself as a disenfranchised group representing one of the largest regions in Yemen, the STC confronted the state at different junctures and demanded significant rights. Its presence affected the relationship between the coalition members, testing their willingness to stay true to the overall mission of restoring the legitimate government of Yemen.

Within this context, the deal reached circumvented a violent disintegration of Yemen into two states, which, although unfavorable, seemed inevitable. While the issue of secession could potentially resurface in the future, the deal has effectively taken disunity off the table. The STC is now obligated to cooperate under the umbrella of a joint coordination committee, which the Saudis will also take part in, until there is a resolution to the Houthi problem that faces North Yemen.

Although the agreement reached in Riyadh is imperfect, it provides enough assurances for all parties as they made significant concessions and a collaborative plan. Under the deal, a new cabinet will be formed, comprising 12 ministers each from the North and South, within 30 days of the signing of the agreement. The terms of the agreement recognized the need for partnership on the political, economic, and security fronts through consultation on decisions ranging from hiring governors to distributing resources. This seemingly consultative component is a positive departure from the top-down approach that has traditionally beleaguered the government of Yemen and weakened its credibility.

Indeed, there is a reason to be skeptical about the agreement given the lack of political leadership and willingness to resolve the southern issue without the need for regional or international mediation. The government of Yemen had long refused to acknowledge the STC as a political authority and often sought to discredit it by painting it as a UAE proxy and establishing competing southern groups, such as al-Eitilaf, with the aim of reducing the STC’s monopoly on the South. Even at the start of negotiations in Jeddah, the government refused to meet the STC directly, preferring to deal with Saudi officials who shuttled back and forth between the groups. The political animosity between the government of President Hadi and the STC will undoubtedly be difficult to diffuse overnight.

However, there are three things in the agreement worthy of mentioning that, if implemented as intended, could turn things around and deepen an alliance between the government and the STC. First, the STC will have a significant say in the way the southern region is governed, giving it an active role in local government and local development, which could lead to the improvement of public services and quality of life at the local level. The challenge is that this is an ambitious goal over a short period of time. If expectations are not managed carefully, and deliverables set out clearly, southerners’ frustration could lead to a new wave of unrest.

Second, there are disarmament and redeployment components that should stop both parties from utilizing their resources and manpower against each other. This will be implemented through the consolidation of all medium to heavy weapons from all military and security forces in the South to be only used under the directive of the Arab Coalition. Furthermore, the agreement also stipulates that all forces should be unified under one command under the Ministry of Defense, within two months of the agreement’s signing. It also will require the government of Yemen to withdraw its forces outside of Aden.

Third, the management of state resources will go beyond the exclusive control of the state, as the deal stipulated depositing all government revenues, including those from extractive sector industries and taxes, in the Central Bank of Aden. The Parliament is expected to resume its functions in Aden, overseeing the budget, and the deal included the need for international and regional expertise to advise on budget management.

The Riyadh agreement undoubtedly presents the STC with a governance challenge. Besides its ability to provide security through the Security Belt Forces and security establishments, the STC does not have sufficient expertise in running other state institutions. Nor is it capable by itself of remedying the decades of negligence in service provision and infrastructure that plagued the South. Most worrying, however, is the fact that the STC cannot combat the existing corruption in state institutions despite the “transparency and accountability” components of the deal. This will require long-term structural changes as well as a strong willingness for all parties to cooperate, which currently may not exist.

Moreover, the agreement is drafted in a way that assumes that all parties are working toward the goal of maintaining a unified Yemeni state, which does not reflect reality. Nor does it address the need to build national identity or horizontal cohesion between members of society and the state in order to foster the unified outcomes it seeks.

For the time being, the deal represents a quick fix that gives all parties what they need for now. It averts a new conflict in the country and refocuses on the main mission of securing Yemen from the Houthis. But it is too soon to tell whether the agreement’s political, economic, and security changes will have a lasting or meaningful impact on the dynamics in southern Yemen, and if it will bring the nation the real unity it needs.