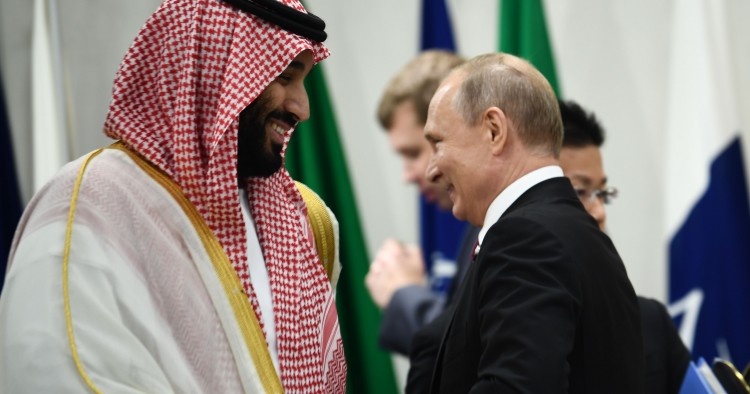 President Vladimir Putin heads to Riyadh in mid-October to try to pry loose multi-billion-dollar investments that Saudi Arabia has pledged to Russia but failed to deliver on. Putin also hopes to persuade the kingdom to increase two-way trade.

A lot is riding on the visit for the Saudis. If it fails to deliver the concrete results Putin wants, Russia might pull out of the OPEC+ cartel that has kept global oil prices high over the past two years. Moscow could also cozy up closer to the Saudis’ arch-enemy, Iran.

Putin’s first trip to Saudi Arabia, in February 2007, was only reciprocated by King Salman in October 2017 — the first time a reigning Saudi monarch had ever made an official visit to Russia.

The warming ties that led to the exchange of visits began three years ago when Russia joined Saudi Arabia in spearheading an oil-production-cut arrangement known as OPEC+. The alignment, consisting of the 14 OPEC members and 11 non-OPEC countries, achieved its objective of increasing oil prices.

None of these multi-billion dollar investments have yet to materialize, although the Saudis are working on acquiring 30 percent of Novomet, Russia’s largest oil and gas subcontractor. For now though that is the only major investment decision made by Saudis in Russia’s energy sector.

Whether the Russians and Saudis can take their relations to the next level depends on whether they can agree on what that constitutes. So far they have had different expectations.

As an example, Riyadh pushed for a 20- to 30-year extension of the OPEC+ deal that included binding production cuts when necessary. Russia, which until the OPEC+ agreement had opposed reducing its output, balked at the idea of mandatory cuts over the long term. This reluctance led to the signatories agreeing on a Russian version of a long-term alliance that is more consultative than binding.

The Russians and Saudis have also disagreed over a $6 billion joint development fund and the kinds of projects it ought to cover. Their sovereign wealth funds — the Russian Direct Investment Fund and Public Investment Fund of Saudi Arabia — created the joint financing vehicle in May 2017. The Russians want it to finance energy projects, however, while the Saudis want it to finance non-energy infrastructure such as airports.

It doesn’t take an energy expert to understand why the Saudis have balked at helping the Russian oil and gas industry. Why would they invest in projects that can help a major global competitor?

The OPEC+ deal has already cost Saudi Arabia its position as the leading supplier to China, the world’s largest oil importer. That’s because the Saudis have had to bear the largest cuts of any of the agreement’s signatories.

The kingdom’s energy leaders grimaced as Russia rushed in to grab the market share the Saudis lost in China. That experience is one reason Saudi Arabia has been focusing its energy investments on importing countries such as China, India, and Pakistan.

Although understandably reluctant, Riyadh will need to follow through on some of its energy-investment pledges to Moscow or risk a chilling of relations that could include the Kremlin abandoning OPEC+.

A number of Russian energy kingpins opposed OPEC+ because it would reduce their companies’ production and thus their profits. But they went along with it at Putin’s insistence.

If the Saudis keep reneging on their investment promises, the leaders of the Russian energy industry — all of whom are Putin cronies — could begin demanding that the Kremlin scrap OPEC+. They could conceivably include two of the major shareholders in Arctic LNG 2 and Sibur, Leonid Mikhelson and Gennadiy Timchenko.

A Russian pullout from OPEC+ could see the return of the price volatility that roiled global oil markets before the deal was reached — an outcome the Saudis would cringe over.

Another factor that is likely to shape the next chapter of Russia-Saudi relations is their stepped-up diplomacy in the Middle East and North Africa, which has been rife with turmoil, including civil wars. If they end up on opposite sides of one or more prickly regional issues, the rapprochement they have achieved could quickly vanish.

Rauf Mammadov is resident scholar on energy policy at The Middle East Institute. He focuses on issues of energy security, global energy industry trends, as well as energy relations between the Middle East, Central Asia and South Caucasus. The views expressed in this article are his own.