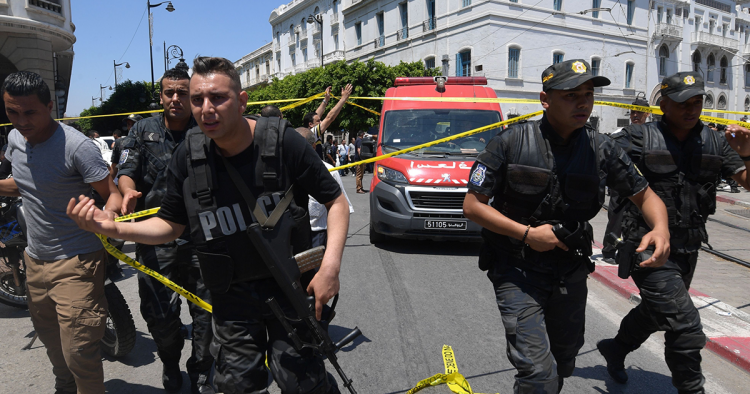 Alongside a stalled economy and a messy political transition, the decade since the 2011 revolution has left Tunisia with an intermittent yet ferocious terrorism problem. On Sept. 6, the country witnessed another stark reminder of this. Tunisian police shot dead three suspected militants after they stabbed two officers in Port El Kantaoui, near the coastal town of Sousse, killing one of the officers. The September attack followed one in March, when two militants on a motorcycle blew themselves up near the U.S. embassy in the capital, Tunis. Twin bomb attacks in the capital also claimed the life of another police officer and wounded several other people in June 2019.

These attacks, while deadly, all paled in comparison to the tragedies that have affected Tunisia in recent years. In March 2015, gunmen stormed the Bardo National Museum in Tunis and killed 20 people. That summer, in the same town that witnessed the September stabbings, a lone gunman killed 38 people, mostly tourists, at a beach resort. Later, in November 2015, a suicide bomber killed 12 members of the presidential guard, capping off a year that was a harsh test of Tunisia’s transition to democracy.

The frequency of these attacks highlights the dangers posed by an uncertain political environment, widespread economic problems, and regional instability. But the fact that they have become less deadly over time also seems to underline the improvements that successive governments have made to Tunisia’s security apparatus. Improved counterterrorism measures, increased security at the country’s porous borders, and investment in the military have yielded results. There were 29 terrorist attacks in 2019, down from roughly 40 in 2016, according to government figures published in the Tunisian media, while arrests on terrorism charges grew from 260 in 2016 to over 500 in 2018. Beyond simply reacting to terrorism, Tunisia has become more adept at preventing it. Yet regular reports of another thwarted attack or the dismantling of a terrorist cell underline just how tenuous these victories are.

Insurgents in the mountains

Terrorist attacks on civilian targets are the more visible face of Tunisia’s security problem, impacting the critical tourism industry and darkening the country’s investment prospects. The other front of the conflict is fought far from Tunisia’s urbanized Mediterranean coastline. In the mountain range along the country’s border with Algeria, militant groups have been fighting a low-intensity insurgency against the government.

These armed groups secured a foothold in Tunisia following the instability caused by the 2011 revolution. The collapse of the Ben Ali-era security structure hindered the post-revolutionary government’s ability to monitor the border regions and prevent infiltration by armed groups from neighboring Algeria. Fighters belonging to al-Qaeda in the Islamic Maghreb (AQIM) moved in and formed a local group called Katiba Uqba ibn Nafi, operating out of the Chaambi Mountains, near the city of Kasserine. Another group, Jund al-Khalifah, also established an operational presence in the region, pledging its allegiance to ISIS. These groups have been able to attract foreign fighters, but their membership is believed to be mainly made up of Tunisian recruits.

In addition to security failures, political instability has also played a role in the situation. Following the revolution, extremist groups carried out an aggressive takeover of the public space in post-revolutionary Tunisia. The amnesty granted to convicted Islamists in Tunisia’s prisons only increased the number of potential recruits. Ennahda, the moderate Islamist party that has become an integral part of Tunisia’s political scene, won the parliamentary elections in 2011, but its initial reluctance to reject extremist groups allowed them to expand across Tunisia, especially over the 2011-13 period. Salafist groups such Ansar al-Sharia were allowed to control hundreds of mosques, recruiting followers to join ISIS in Syria and Iraq, but also the insurgency in the Tunisian hinterland.

Security forces were initially caught off guard by the effectiveness of insurgent groups and the heavy death tolls they inflicted. During most of President Zine el-Abidine Ben Ali’s rule, the Tunisian military was kept in a state of perpetual weakness, partly due to the autocrat’s fear of a military coup. The sidelining of the army allowed it to remain apolitical and maintain a modicum of stability post-2011. But it also meant that the Islamist insurgency was met by a relatively weak and untested military force that was still adapting to its new role.

The result was a relatively high number of fatalities and injuries during the initial years of the insurgency. Since 2011, the conflict has killed or injured 300 Tunisian security personnel — including soldiers, police officers, and national guard members — and 150 insurgents. Although civilians have been increasingly targeted, the insurgents have attempted to maximize casualties within the military and national guard forces. In July 2014, an attack on a military checkpoint in the Chaambi Mountains by dozens of armed insurgents killed 14 Tunisian soldiers. In August 2016, militants killed three soldiers after ambushing them with landmines near Mount Sammama, another remote area of the region. In July 2018, six Tunisian police officers were killed in an ambush near the northern town of Jendouba. That same year, insurgents robbed over $98,000 from a bank in the town of Sbiba. Islamists have beheaded civilians after accusing them of helping the military.

The number of casualties among Tunisian military and national guard personnel has been relatively low, compared to more violent and long-lasting insurgencies. But it shocked a force that had not previously been involved in major conflict. The use of artisanal mines, in particular, had a significant impact on Tunisian security forces, causing substantial injuries and lowering moral.

The state fights back

In recent years, however, Tunisian forces have reduced casualties within their ranks, effectively targeting militant structures and restricting their areas of operation. This has been achieved through improved intelligence sharing with the Algerian military, greater access to foreign military training and equipment, and increased cooperation among Tunisian police, the national guard, and the army. Foreign military assistance — mostly from the United States and Europe — has been critical to shore up counterinsurgency efforts. U.S. special forces have been discreetly training and supporting Tunisian forces, reportedly participating in at least one gun battle against militants in 2017. The U.S. also operates a drone base from the Tunisian city of Bizerte. Since 2010, Tunisia’s military expenditure has increased from an annual $572 million to $1 billion in 2019. This has allowed for the acquisition of more modern military equipment, including 12 U.S.-manufactured Black Hawk helicopters for a total of $700 million, armored personnel carriers, and Hellfire missiles; earlier military contracts also allowed Tunisia to procure 52 Humvees and two C-130J transport airplanes. The number of soldiers has risen, from fewer than 25,000 in 2011 to about 45,000 in 2016. A stronger institutional response has helped too. In 2015, the government established a national counterterrorism commission — which has played a key role in freezing financial assets linked to the financing of terrorism — and a special unit of judges charged with handling terrorism cases.

In a way, it is unsurprising that insurgents have been able to destabilize pockets of Tunisia’s hinterland. Unlike the coastal towns sustained by tourism and manufacturing, the country’s interior has long suffered from underinvestment and government neglect. The COVID-19 pandemic and associated economic crisis is expected to cause the Tunisian economy to contract by 7 percent this year, compounding existing problems. The same negligence that paved the way for the 2011 revolution risks further fueling Tunisia’s security problems and destabilizing its political transition. Much will also depend on what happens in Tunisia’s neighborhood, especially in Algeria and Libya.

Security forces are now better equipped to fight militants in the mountains as well as locate and destroy terrorist cells across the country. But both of these challenges will continue to pose risks. Much like illegal immigration into Europe, insurgency and extremism offer alternatives to a young population with few economic prospects. In the long run, improving security will require more than just military and policing solutions.