The puzzling outcome of the Moscow Summit 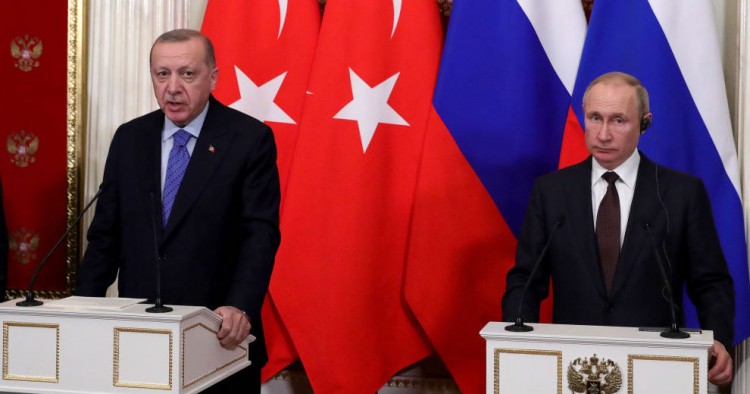 A few weeks ago, the Syrian regime backed by Russian airpower was marching swiftly northwards into Idlib’s interior, leaving a trail of destruction and death in its wake. Villages and towns were being leveled to the ground, forcing entire communities to flee toward the Turkish border. In 85 days, nearly a million people were displaced into Idlib’s border region, where over 800,000 displaced people were already residing in overcrowded tent camps. The humanitarian crisis was unprecedented, not just in Syria’s nine years of war but in international history as far back as the Second World War. As with dozens of “agreements” that came before it, the Sochi and Astana deals were meaningless words on paper. As guarantors to those agreements, Turkish soldiers and their observation posts inside Idlib were being swallowed up by regime advances at an exponential rate.

Throughout the regime’s ruthless offensive — which involved the near-daily destruction of kindergartens, hospitals, and markets — Turkish attempts to convene negotiations with Russia were repeatedly rebuffed. Additional Turkish military deployments into Idlib, arms supplies to its proxies, and even downing of several regime helicopters were aimed at deterrence, but resulted in even greater Syrian and Russian escalation. Faced with the greatest humanitarian crisis in modern history and unprecedented state-on-state hostilities, the international community appeared largely disinterested.

On March 1, the Turkish military launched Operation Spring Shield — an expansive drone-led air campaign targeting Syrian regime airbases, arms depots, heavy weapons, and air defense systems. Several Syrian regime fighters jets were shot down and Turkish artillery systems sustained a heavy shelling of regime positions across northwestern Syria. Within days, hundreds of regime fighters had been killed and to fill their spaces on the frontlines, the regime was dispatching policemen and underage conscripts. Iran even reversed its year-long refusal to fight in Idlib and dispatched Hezbollah and Fatemiyoun militiamen to fill the regime’s manpower gap. Then Russia blinked and invited Turkey’s President Recep Tayyip Erdogan to Moscow, to negotiate a cease-fire.

In changing the balance of power on the ground and forcing hostilities to a stalemate, Turkey’s military intervention had produced its desired effect. On March 5, Vladimir Putin and Erdogan sat together for six hours and announced to the world a comprehensive cease-fire and the establishment of a secure corridor spanning six kilometers on the north and south sides of the M4 highway. The cease-fire was unsurprising, but the secure corridor was a bewildering development. As Turkish and Russian officials indicated that day, and as Turkish Foreign Minister Mevlut Cavasoglu explained on March 10, the 6-km zone south of the M4 would be placed under Russian control. That would imply that the 25-km strip of territory south of the M4 currently controlled by the opposition was effectively being abandoned by Ankara. How that territory south of the M4 would change hands was not explained, but Turkish signaling was clear. Having worked so hard to regain the initiative in Idlib, Turkey’s decision to cede such an expanse of territory was puzzling.

There are several possible explanations for the deal struck at the Moscow Summit. One possibility is that a cease-fire was the only meaningful outcome that both Turkey and Russia could actually agree on, but for the sake of protecting a bilateral relationship that is defined by much more than Idlib, the “secure corridor” was added as a proposal to be negotiated at a later date. That would explain the lack of any detail on implementation and the subsequent initiation of military-to-military talks to negotiate how a secure corridor might be introduced.

In all likelihood, Turkey was also cognizant of the reality that cease-fires in Syria do not have a habit of lasting long and a renewed round of hostilities was just a question of time. By agreeing to a cease-fire, Turkey may have lost the military momentum gained through Operation Spring Shield, but it gained more time to militarily reinforce its ultimate red line on the M4 Highway. Indeed, hundreds of Turkish tanks and armored vehicles have flooded into central Idlib in the days following the Moscow Summit. In the weeks preceding the summit, Turkish troops had established a string of observation posts along the highway, in a clear indication of their longer- term vision for what may eventually be a compromise settlement with Russia.

For Turkey, that broader long-term perspective on a future deal with Moscow is likely to encompass issues beyond Idlib. Rumors whispered in Turkish circles hint at a possible under-the-table Russian green light for Turkish attacks on key cities held by the Syrian Democratic Forces like Kobani or Manbij in exchange for a reduction in Turkish troop levels in Idlib and a shrinkage in opposition territorial control. That might go some way toward explaining why Erdogan’s core opponents in Ankara were surprisingly soft in their criticism of the outcomes from Moscow.

As all external actors have done since 2011, Turkey appears to be prioritizing its own self-interest in dealing with Idlib. Turkish drones were not killing Syrian soldiers and blowing up air defense systems in order to protect Syrian lives — their actions were driven by an urgent need to halt the regime’s advance and sustain an expanse of territory large enough to prevent an influx of refugees into Turkey. Likewise, the cease-fire was not principally driven by a determination to stop the killing as much as it was to avoid a total breakdown in a strategic relationship (with Russia).

Assuming this analysis is accurate, the prospect of another phase of intense violence in Idlib is high and possibly imminent. Until now, there is little reason for the Syrian regime not to believe that total victory is possible, unless Turkey’s military response next time around is even more significant and sustained. If it is, then the best-case scenario for Idlib may become possible: the “Gazafication” of the province’s northern zone, under Turkish protection. That would still be a humanitarian crisis of unprecedented proportions, but it would better allow for the containment of the crisis when compared to the worst case: a sustained regime advance all the way to the Turkish border.

Charles Lister is a senior fellow and director of MEI's Countering Terrorism and Extremism Program. The views expressed in this articles are his own.