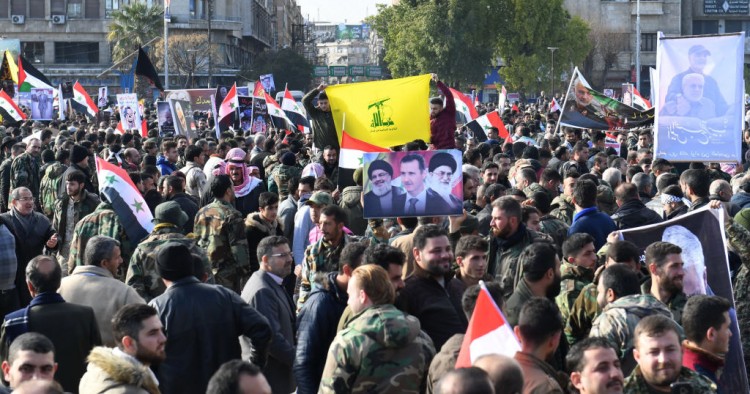 The U.S. assassination of Iranian Gen. Qassem Soleimani, head of the Islamic Revolutionary Guard Corps (IRGC) – Quds Force, came as a seismic shock to the Middle East, not least to the embattled political system in Damascus that has reaped the benefits of Iran’s military involvement across the region. Syria was Soleimani’s final theatre of war, and the assassinated leader of the Quds Force was President Bashar al-Assad’s strongest military ally on the ground — a powerful and mysterious figure whose legend has reached almost mythical proportions inside and outside of Syria.

Damascus reacted rapidly to the sudden loss of Soleimani with President Assad sending two condolence cables to the Iranian supreme leader, Ayatollah Ali Khamenei, and President Hassan Rouhani, calling Soleimani a “martyr” who gave much to Syria. Soleimani was decisive in breaking the siege of Aleppo and fighting to take it back, and he also led the successful operation to recapture Deir Ezzor from ISIS.

Soleimani was seen as untouchable in recent years. Iranian Foreign Minister Javad Zarif temporarily resigned last February to protest Soleimani’s flouting of his authority by bringing President Assad to Tehran for meetings without even consulting or informing him. While he was viewed as a fearsome opponent, Soleimani’s public image, especially in Syria, was crafted to portray him as a modest and down-to-earth person — one such tale depicts him leaving a handwritten thank-you note and some money for the owner of the house he had taken over in al-Boukamal before departing.

Ayham Marjeh, a correspondent with the pro-Iranian al-Mayadeen news agency, elaborated on Soleimani’s crucial role in the Syrian conflict: “Soleimani was a key leader in the field, one whose efforts do not tire. He would suddenly appear in an area and within hours he would be present elsewhere on more than one frontline in Syria. With Soleimani’s help the Syrian army managed to retake large chunks of the country.”

Syrian reporter Sohayb al-Masri, who was embedded with Iranian-backed troops in the country, spoke of the mood when news of his death broke: “The news was initially shocking to everyone, and it’s also [a] major surprise to the axis of resistance.” Al-Masri added, “His death will not break the momentum of Iran’s role in the region because this axis relies on preparing many other leaders to replace those who were killed.”

Meanwhile Syrian officials flocked in droves to the Iranian embassy in Damascus. Small, tightly coordinated popular gatherings were held in Latakia, Aleppo, and Homs condemning the strike that killed Soleimani. He was also given the “Order of the Hero” of the Syrian Arab Republic, the highest Syrian medal given to a non-Syrian citizen.

Due to his role in helping to crush the armed anti-Assad insurgency, Soleimani’s death provoked an outpouring of grief in government-held areas of Syria. Despite the controversial nature of Iran’s presence in Syria and the ideological and political differences between loyalist-held areas of the country and Iranian-backed groups, his death was universally mourned by loyalists, more as a sign of appreciation for his military assistance during tough times, rather than support for his and Iran’s aims in Syria and the region.

Syria’s spymaster and head of the National Intelligence Bureau, Ali Mamlouk, visited Tehran and attended Soleimani’s funeral as a show of solidarity — as well as a clear sign of the fact that the assassinated Quds Force leader dealt mainly with Syria’s intelligence and military apparatus. Days later a high-level delegation headed by Prime Minister Imad Khamis visited Iran on Jan. 12 to pay its official respects but the lack of an official “non-security” representative at the funeral suggested a subtle desire from the Syrian side to keep Soleimani firmly out of Syrian politics.

Soleimani’s involvement in the war

While it was initially believed that Soleimani first became involved in military operations in Syria during the strategic battle for al-Qusayr near Homs in 2013, new information has come to light suggesting that Iran and Soleimani in particular played a far greater role in the conflict — and one that started much earlier. Syrian Minister of Defense General Ali Ayoub recently revealed that he first met Soleimani in Homs in 2011 during the first year of the conflict, and that the “first battle we planned and carried out was in Bab Amr in Homs.” This would suggest that Iran’s military involvement in Syria began from day one of the conflict and that its relationship with the leadership of Syria’s military and security apparatus was inextricably intertwined in terms of strategy and planning for the survival of the regime.

As part of the war effort, Iran recruited many local forces both in Syria and Iraq to serve its purposes, such as the Fatemiyoun Division. The vanguard of Soleimani’s militias in Syria, the Fatemiyoun Division is said to have reached 20,000 soldiers at its peak, while other sources suggest the group had at least 10,000 fighters in Syria alone at any given time. Syrians from towns such as Nubl and Zahraa in Aleppo and Kafraya and Fua in Idlib with a traditionally Shi’a background joined Soleimani’s groups during the war, for military, financial, and ideological purposes. As the economic situation worsened, men of military age lacked stable job opportunities and saw fighting as a quick fix — a situation that strongly benefited the Iranians.

According to Nicholas Heras, a Syria analyst at the Institute for the Study of War, “Qassem Soleimani is the man who saved Bashar al-Assad from a fate like Gadhafi. Soleimani was the architect of a ‘foreign internal defense’ strategy in 2012 that stabilized the Syrian government's internal security posture at a time when Damascus was either losing or ceding territory to the rebels throughout the country.”

But his militias and supporters will outlast him

The U.S. decision to eliminate Soleimani was a severe blow to Iran and its regional network of proxies, allies, and armed groups; however, it will not necessarily translate into a decline in Iran’s influence or military presence in Syria. On the contrary, Soleimani not only prevented the fall of the Syrian government but built an army of militias and supporters that will outlast him, possibly by decades.

Soleimani’s role in the Syrian conflict was controversial. For some, he was perceived as the mastermind behind the Syrian government’s military successes, while others saw him as a dangerous, rogue war criminal. “For the anti-Assad Syrians, he was a war criminal and number one [person] responsible for the demographic changes in many places in Syria, including Damascus and Homs,” said Ruwan Rejoleh, an analyst covering the conflict.

While Soleimani’s death will certainly have an impact on Iran’s efforts in the region, its power and influence will not wane overnight. Rejoleh added, “It is likely that it might create some confusion on a tactical level and weaken the ability to control and command the network of militias Soleimani enhanced, [but] Iran’s Shiite militias will remain a source of destabilization in the region.”

The conflict in Syria is far from over and Iranian-backed groups will be a presence in the country for the foreseeable future. Less than a week after Soleimani’s death, suspected Israeli airstrikes hit Iranian-backed forces in al-Boukamal in Deir Ezzor on Jan. 10, with the Associated Press reporting that eight fighters were killed, followed by strikes on the T4 military airbase near Palmyra in east Homs on Jan. 14, when three more were reportedly killed. Despite the continued airstrikes, Al-Masri hinted that the Iranian-backed militias are likely to remain in the country for some time to come: “These [Iranian] military formations will remain present on various Syrian areas and their support has not and will not stop with the martyrdom of any leader.”

While Soleimani’s legacy appears to be well established in Syria, one final wrinkle has emerged with media reports suggesting there may have been potential Syrian complicity in his assassination. The Syrians are conducting their own tight-lipped investigation as to any potential intelligence leaks from moles or spies that may have given away Soleimani’s position as he travelled from Damascus to Baghdad. According to Reuters, “Two employees of Cham Wings [a Syrian airline] are under investigation by Syrian intelligence.”

Soleimani may have been an enemy of the U.S. for decades, but his death will not spell the end of his aims and ambitions for Syria and the region. There are still tens of thousands of fighters and any number of commanders in Syria who he helped train that may yet carry on his work to expand Iran’s influence and hegemony across the Middle East.