Qatar and global LNG: Potential pivot from Asia to Europe? 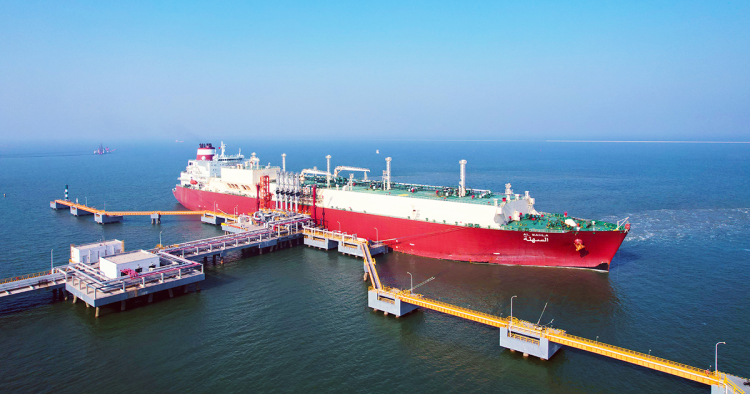 For several decades, Qatar was the leading exporter of liquefied natural gas (LNG) to world markets, primarily in Asia. The Qataris pioneered the high-volume, low-cost, long-term tram line delivery model to creditworthy Asian clients. Qatar is currently one of the world’s top LNG exporters, exporting approximately 77.1 million tons per annum (Mtpa), with the U.S. (44.8 Mtpa) and Australia (77.8 Mtpa) the other leading exporters (data as of 2021). The global LNG landscape is changing, and while Qatar will continue to be a major LNG exporter, it will briefly drop to third in the global rankings until planned expansion projects come on stream in the middle part of the decade. Additionally, Qatar will be faced with negotiating LNG supply contract renewals. Strategically, Qatari suppliers may opt to change their market supply profile, which will have a knock-on effect on the global market, both LNG suppliers and buyers.

LNG production began in the mid-1990s and Qatar now produces 77.1 Mtpa of LNG from 14 liquefaction trains. Currently, ExxonMobil is Qatar’s largest business partner and interestingly, its Qatari assets are the most valuable ones in its portfolio. Other major partners in Qatari LNG projects are listed below (Figure 1.)

The LNG volumes produced at these assets are sold via long-term contracts to primarily Asian clients. Qatari LNG is also delivered to the U.K. via a Qatar Petroleum (67.50%)/ExxonMobil (24.15%) jointly owned regasification facility (South Hook, U.K.). This joint venture terminal has the potential to supply approximately 20% of U.K. annual gas demand.

Typically, operators will strive to achieve 100% or higher operating efficiency as down time adversely impacts project revenue and economics. Contractual commitments will target a 95% or higher operating efficiency and thus leave minimal volumes uncontracted as a buffer. With the Qatari liquefaction trains operating at a 99% average efficiency, according to estimates from Wood Mackenzie, little volume remains available for sale on the spot market. As such, Qatar has little LNG volume to divert to Europe to displace Russian gas supply in the near term.

Over the life of the LNG assets, the Qataris and their partners have de-bottlenecked the liquefaction trains to increase LNG production. While Qatar remains a major global LNG producer, it has recently ceded the number one slot to Australia and will soon slip to number three once additional U.S. LNG production comes on stream (Figure 2).

The slippage to number three will be short lived as Qatar has announced it plans to increase its LNG capacity to 110 Mtpa by adding four 7.8-Mtpa mega-trains with a targeted first production in late 2025. A second expansion phase of 16 Mtpa is planned for first LNG in 2027, increasing export capacity to 126 Mtpa. LNG supply contracts will need to be negotiated for the increased volume. It is these volumes that could be directed toward the European market, assuming there are qualified buyers willing to pay market prices. LNG volumes will find a market, but there must be buyers for the additional volumes, which at the moment are undefined within the European Union.

With the original LNG supply contracts nearing the end of their tenor and additional expansion volumes on the horizon, the Qataris have entered a period of LNG supply contract renegotiations. According to Wood Mackenzie, approximately 70% of Qatari LNG volumes will need to be placed into the market by 2027. Some established buyers will renew their supply contracts while other buyers may seek to diversify their supply portfolio. At the same time, the Qataris will look to optimize their client base and that may allow European buyers to secure LNG volumes as insurance against any Russian gas supply disruption. Any discussions between Qatar and European buyers and portfolio players (e.g., Shell, Total, BP, Trafigura, Vitol) will be on commercial terms. That said, governments do not buy LNG, companies do, and thus any transactions will be commercially driven.

The Qataris have also expanded their portfolio to an equity position in U.S. LNG. The Golden Pass LNG Export Project in southeast Texas is a joint venture between Qatar Petroleum (70%) and ExxonMobil (30%). Comprising three trains with a total capacity of 15.6 Mtpa (2.6 billion cubic feet per day), the plant is now expected to start up in late 2024. In 2016, ExxonMobil and Qatar Petroleum formed a joint venture, Ocean LNG, which markets international LNG (e.g., LNG sourced outside of Qatar). Ocean LNG has committed to taking 100% of the Golden Pass LNG volumes into its portfolio, allowing Golden Pass to take a final investment decision (FID) while Ocean LNG seeks buyers for the volume. The European market has previously had the opportunity to secure long-term LNG supplies from the Qataris, but this time it will be able to do so from a U.S.-based facility.

In the mid-term, the Qataris can provide significant LNG volumes to the European market should the current political unrest around Ukraine and Russia continue into the middle part of this decade, provided buyers emerge willing to pay globally competitive prices for the commodity.

After the mid-2020s as new production comes on stream and supply contracts are renewed, Qatar will be well placed as one of the top and most reliable global LNG exporters for many years to come. New LNG projects in the U.S. may challenge the new Qatari 110-Mtpa threshold, but those projects are still in the pre-FID stage while material expansion of Australian LNG capacity is also immature. The Qataris have a second round of expansion planned, but they will likely wait to advance those projects until new volumes have been absorbed into the market without adversely impacting prices.

The new volumes and renegotiated contracts may find new clients in the European market, which if true, would provide Europe a stable long-term LNG supply sufficient to replace any Russian shortfalls. The supplier, however, will be commercially driven and as such, the buyers will need to be prepared to pay market prices to secure those long-term volumes. At present, the European buyers have yet to disengage from Russian supply and seriously entertain alternate gas supplies. With the EU focus on greener energy, the market will need to pivot twice, away from green power and Russian gas. The window of opportunity is limited as Qatar will secure supply contracts in a competitive market where buyers will be keen for long-term secure supply. At the end of the day it is first come, first served. European buyers will need to move with sincerity and commitment to secure Qatari supply for the longer term.

Wayne Ackerman has more than 30 years’ experience in the upstream exploration and production sector and major capital project development, including LNG. Most recently, while at Saudi Aramco, he developed the International Gas Strategy, which was sanctioned by the Board. He then led implementation, completed global opportunity screening, and led the North America LNG commercial efforts. He is also the founder and president of Ackerman and Associates Global Consulting, LLC, and a member of the Advisory Council for MEI’s Program on Economics and Energy. The views expressed in this piece are his own.

Photo by VCG/VCG via Getty Images