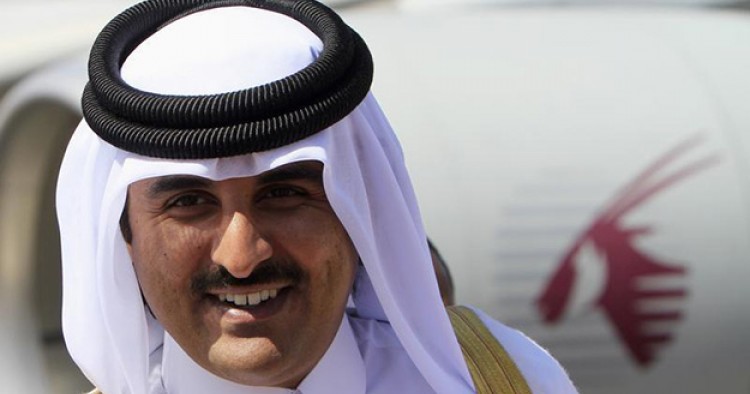 When Qatar’s Sheik Tamim bin Hamad al-Thani came to power after his father, Sheik Hamad bin Khalifa al-Thani, abdicated in late June 2013, he assumed a tricky diplomatic situation. While Sheik Hamad had been interested in promoting Qatar’s international position and had pursued a robust policy of regional engagement, even at the cost of alienating his neighbors, Sheik Tamim is more inclined to focus on regional collaboration and neutrality.

Since Qatar launched Al Jazeera in 1996, many of its Arab neighbors have been suspicious of Doha’s potential for political meddling. But with Qatar’s amping up of its involvement in regional affairs, particularly after the “Arab Spring,” these neighbors, in particular Saudi Arabia, the UAE, and Bahrain, became even more suspicious—and ultimately at odds—with Qatar, especially in regard to its support of the Muslim Brotherhood.

The roots of the stance in Qatari diplomacy vis-à-vis the Muslim Brotherhood go back to early in Sheik Hamad’s rule. Sheik Hamad never hid his ambition to modernize Qatar’s religious image from one couched in Saudi ideology to one based more on local Wahhabi-leaning clerical ideals and Muslim Brotherhood ideological influences. Qatar thus began in the 1990s to fashion for itself an Islamic identity separate from its Saudi neighbor,[1] which is based on influential religious networks that are distinct from and mistrustful of the Brotherhood. The Arab uprisings seemed an ideal opportunity for Qatar to solidify its religious leanings and to spread them, including via Al Jazeera.

This ideological rivalry helps explain the March 2014 diplomatic crisis that saw Saudi Arabia, the UAE, and Bahrain withdraw their ambassadors from Qatar. The three countries announced that the move was due to the fact that Doha had not implemented a 2013 security accord among the GCC countries to not interfere in each other’s internal affairs. The accord stipulated that any GCC country cannot back “anyone threatening the security and stability of the GCC whether as groups or individuals—via direct security work or through political influence, and not to support hostile media.”[2] The crisis revealed deep divisions based on one side’s appreciation of the new military-oriented Egyptian regime versus Qatar’s support for the political activism of the Brotherhood in Egypt as well as throughout the MENA region.

Although Sheik Tamim was obviously involved in this recent diplomatic crisis, his priorities are different from those of his father. He has consistently sent a message to Qataris that he will pay more attention to domestic concerns, whereas Sheik Hamad focused on the country’s international image. Sheik Tamim’s policy of regional integration rather than differentiation was on display in 2008, when he was at the forefront of the Saudi-Qatari appeasement in which the two states established a strategic dialogue for closer relations under the watch of the late Saudi Interior Minister Prince Nayef. Nayef’s son Mohamed, who replaced him, is said to have maintained a dialogue with Tamim and the new Qatari leadership even during the March 2014 diplomatic crisis.[3]

In addition, Sheik Tamim has not enjoyed good relations with his uncle, former Prime Minister Sheik Hamad bin Jassem, who worked closely with Sheik Hamad. Tamim has been critical of Jassem’s provocative diplomacy toward Qatar’s Arab neighbors, particularly Saudi Arabia. Essentially, Tamim considers rivalry with Saudi Arabia unproductive. For instance, the Saudi-Qatari rivalry has not helped build a cohesive Syrian opposition, to which both countries are committed. The Assad regime has benefited from this regional divide, as Iran stepped up to bring it full and cohesive support via Hezbollah and Russia. Such support has aided Assad’s current domination of the conflict.

Further, Sheik Tamim’s government is composed of young technocrats who are most concerned with domestic policies and are in charge of modernizing the local administration. Noticeably, Prime Minister Abdullah bin Nasser bin Khalifa al-Thani has a background in interior affairs and a focus on domestic investments, homeland security, and local citizens’ priorities. And Sheik Tamim considers his main international challenges succeeding in hosting the 2022 World Cup and toning down his father’s regional diplomatic activism in order to undertake Qatar’s ambitions so that they do not bring about conflict with neighbors.

The players involved in the March 2014 crisis reached a détente after a meeting of GCC foreign ministers in Riyadh in April, with the mediation of Kuwait and the support of Oman. The mediation convinced Saudi Arabia, the UAE, and Bahrain to give Sheik Tamim time to change Qatar’s regional policies. While this compromise does not mean that there is full agreement between Qatar and its neighbors on what Qatar’s regional policies will involve, and while the deal does not mention the return of Saudi, Emirati, or Bahraini ambassadors to Qatar, it does signal the players’ intention to at least nominally reconcile, especially given the context of containing regional disorder.

Today, the GCC presents two faces. On one side, Saudi Arabia, the UAE, and Bahrain promote a hard-line security approach, reinforcing GCC defense and security apparatuses or trying to promote a Gulf Union, which would involve a strong military alliance, in place of the current inter-governmental GCC structure. On the other side, Kuwait and Oman offer a more pragmatic, open, and mediatory diplomatic agenda. For instance, Kuwait has worked over the past two years to ease its relations with Iraq, and the two states achieved a border agreement in early 2013. As for Oman, it is focusing on improving relations between Iran and other Gulf states.

If Sheik Tamim can promote the low-profile regional approach that he personally supports, using the extensive diplomatic networks created under his father’s rule for the common interest of the GCC and not for Qatar’s own benefit, he could play a positive role in the neighborhood, similar to the Kuwaiti-Omani style of diplomacy. This posture could even have a positive effect on the Egyptian issue.

Signs point to Sheik Tamim moving in this direction. For example, Qatar agreed to expel some Muslim Brotherhood activists from its territory, and Doha suspended Muslim Brotherhood-friendly Sheik Yusuf al-Qaradawi’s weekly Al Jazeera program, Shariah and Life. Qaradawi is also no longer preaching in Doha’s Grand Mosque. Further, Sheik Tamim recently announced that he will be launching a new London-based, Arabic-language television channel—AlAraby Television Network—to counter Al Jazeera.[4] Such moves are aiding Tamim in his goal of easing relations with his GCC neighbors.