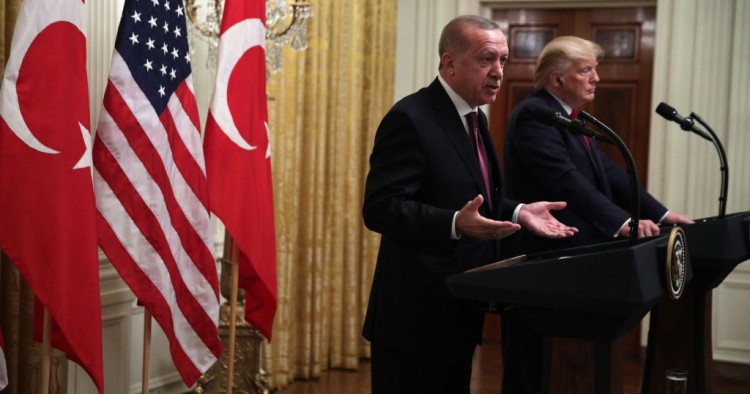 Henry Kissinger famously observed that diplomacy is “an accumulation of nuance”. Arguably the time is now ripe to begin accumulating such nuances in regard to Turkey. The difficulties of dealing with Turkey and President Recep Erdogan are incontestable and well-known. Nevertheless, Turkey’s geopolitical significance is equally indisputable and far-reaching. Many of the major issues in European security – migration, Libya’s civil war, confronting Syria’s civil war (the equivalent in our time of the Spanish Civil War in the 1930s), stabilizing the Balkans, defending the Black Sea, European energy security, and in particular accessing the energy in the Eastern Mediterranean – would benefit from the restoration of a true and ongoing strategic dialogue with Turkey. Indeed, neither we nor Turkey can make progress on them without such a dialogue.

Today we are reaping the unfortunate consequences of one of the greatest Western mistakes of the 2000-2010 decade. In 2003, NATO failed to give Turkey adequate assurances of its safety in conjunction with the U.S. invasion of Iraq. That failure, coupled with the EU’s failure to enter into serious dialogue with Turkey, allowed President Erdogan to draw the logical inference of rejection and turn to neo-Ottomanism and authoritarian domestic political practices.  Moreover, leaving Turkey out of Western equations continues to hamper the EU, NATO and the U.S’ ability to make any progress on all those issues listed above. However, today it is possible to begin to restore some dialogue with Ankara and point out the existence of some common interests. To the degree that we can restore a true dialogue and build more mutual confidence, we can proceed to the long hard road ahead of improving relations with Turkey on a more durable foundation. The basis for this argument lies in the recent Russo-Syrian-Turkish armed confrontation in Syria in February-March 2020.

Most observers assessed the results of the recent Russo-Turkish clash in Syria that led to a serious crisis in February-March 2020 as a Russian victory. Some analysts even used the term ‘humiliating’ to characterize the outcome of negotiations on March 5. Nevertheless, this crisis must have driven home to Ankara the fact that Russian and Turkish interests in Syria are incompatible. Whereas Moscow and President Bashar al-Assad want the Syrian leader to extend his rule as far as possible, Turkey insists on carving out a large buffer zone to reduce the burden of refugees on Turkey and to isolate Syria's Kurds from Turkey. Since Ankara regards the YPG (the Syrian Kurdish organization) as nothing more than terrorists and an adjunct of the Turkish PKK opposition, it has been determined to use force to advance its interests. But it is not willing to clash directly with Russia. Likewise, Russia is equally reluctant to fight directly with Turkey. Thus, the recent crisis is already showing signs of strain and is unlikely to be the last such episode. Indeed, already the joint patrols in Syria that both sides agreed to on March 5 have become a source of bilateral tension with Russia.

Moreover, there has been visible divergence from Russia on many levels: in Libya, where Turkish and Russian forces and proxies are fighting on opposite sides; with Turkey’s reduction of gas imports from Russia; Turkey’s staunch support for Ukraine and technology transfer to its defense sector; Turkey’s strong support for Georgian territorial integrity and NATO membership; and Turkey’s obvious support for NATO’s enhanced patrolling in the Black Sea. Turkey has also refrained from attacking NATO as an institution, despite its quarrels with the EU and European governments. Indeed, Turkey is well aware it wouldn’t be able to challenge Russia by threatening to close the Straits – a move that would isolate Russian forces in Syria from their logistical bases – without the security that NATO allows it to do so.

More recently, on April 20, Turkey postponed the activation of S-400 systems, the acquisition of which caused enormous rancor with NATO and Washington, in particular.  Prior to the sanctions, the thinking in Washington was that Turkey would activate these systems around late April and U.S. Congress would retaliate by imposing sanctions. This delay gives both Ankara and Washington more time to ponder the S-400 issue and search for alternatives to going to the brink. Some observers believe the pandemic might also oblige Turkey to seek alternative foreign funding to activate those systems. Indeed, Murat Uysal, governor of Turkey's central bank, confirmed on April 19 that Turkey is currently seeking a number of swap agreements to help mitigate the economic impacts of the coronavirus.

Admittedly, and despite negative forecasts for the Turkish economy this year, Turkey still insists that it will not renege on the S-400. Even so, during the crisis with Russia, Turkey invoked the Washington Treaty’s Article IV forcing consultations of all the members. At the same time, Turkey asked the U.S. to deploy two Patriot missile-defense batteries on its southern border to deter further Russian advances. Therefore, though nobody says so in public, there are real opportunities here for resuming bilateral U.S.-Turkey agreements or NATO-Turkey accords or dialogues among these three parties based on shared perceptions of the Russian threat. Indeed, even if it proves impossible to reach agreements on these air-defense systems, dialogue should resume anyway. In terms of Syria, Ukraine, Libya, the Black Sea (if not also the Caucasus), and with regard to energy, Russo-Turkish interests are becoming ever more visibly incompatible, even if neither side wants to affect a rupture with the other. And Turkey clearly understands this.

Resumption of a dialogue is valuable in and of itself for all sides to be able to explore in confidence and then identify areas where common interests can be advanced through mutual action. Only on that basis of dialogue and common action can mutual trust and confidence be restored. Undoubtedly this restoration of mutual confidence and trust will take a long time to achieve. But without dialogue, it will be more difficult, if not impossible, to make progress on Syria, Libya, migration, the Eastern Mediterranean, a shared outlook on energy security, Ukraine, and the Black Sea. And it will be even harder for Europe to deal with the threats that a war-torn Middle East and Maghreb pose to its security without an equivalent dialogue.

Thus, we have an opportunity in Washington and Brussels, as well as Ankara, to resume dialogue that can lead over time to restored trust and confidence. Washington and Brussels will have to come to terms with Turkey’s insistence upon its rights and interests, i.e. negotiate these dialogues and accords on a new basis. Already in 2012, Turkish writers were arguing that Turkey had created or was creating the conditions to make it a leading Middle Eastern and Mediterranean power: “it had moved from being "a compliant member of the Western community to being an assertive power with the potential of shifting the strategic balance of the whole region." Whether or not this attitude was realistic in 2012 or today, there is abundant evidence that this mindset is now pervasive across Turkey’s elites. Thus, there may well be what experts call a cognitive dissonance between the Turkish elite’s perception of Turkey and its reality. Having been rebuffed by Moscow in Syria and clearly not enjoying the full confidence of its NATO partners, dealing with the added burdens of the coronavirus on top of the refugee issue, and managing visible economic stress as its currency faces attack, Turkey may actually be considerably weaker than it likes to pretend.

The West will have no choice but to deal with this Turkish mindset for, if anything, it has grown much stronger due to Turkish domestic and foreign policy trends of the last decade. Nonetheless there is now, precisely because of the crisis with Russia and the new economic challenges cited above, a new basis for resuming this necessary dialogue with Turkey. Failure to do so will mean endless and protracted crises for Turkey, Europe, and the U.S. We should seize the day and start accumulating those nuances so that they provide a more durable future foundation for conflict resolution rather than conflict diffusion and/or escalation.

Dr. Stephen J. Blank is Senior Fellow at Foreign Policy Research Institute's Eurasia Program. He has published over 900 articles and monographs on Soviet/Russian, U.S., Asian, and European military and foreign policies, testified frequently before Congress on Russia, China, and Central Asia, consulted for the Central Intelligence Agency, major think tanks and foundations, chaired major international conferences in the U.S. and in Florence; Prague; and London, and has been a commentator on foreign affairs in the media in the U.S. and abroad. The views expressed in this article are his own.