Re-centering the “countries in between” 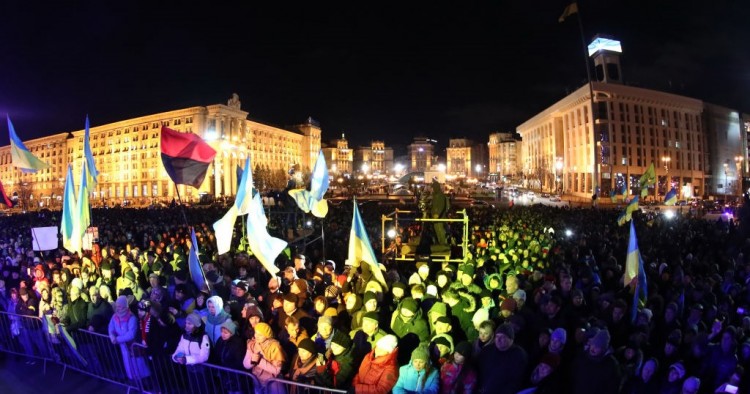 The troubles of the Eurozone and the turbulence provoked by the populist surge in much of the West have distracted us from the real challenge — and it is a seismic one: the collapse of the post-Cold War order. Too euphorically defined as the “international liberal order” by those who now fret about its demise — in fact, it was never uniformly liberal, nor global in scope — it dealt with a concerted attempt to expand the West and its ways to what had been on the other side of the wall during the Cold War era.

Nowhere was this more evident and consequential than on the European continent, where both NATO and the EU embarked on a formal policy of enlargement in the 1990s. While in principle all European countries could qualify for eventual EU membership, countries to the south or the south-east of Europe’s continental core would not join the club but could still feel the influences of Europeanization, through selective but privileged access to the European market.

When in the late 2000s the “age of imitation,” to use social scientist Ivan Krastev’s words, first faced pushback, those countries that had remained “stuck in transition” or had not joined Western institutions were characterized as the “countries in between.” This one-size-fits-all (and possibly derogatory) terminology lumped together a number of different realities, from Ukraine to Georgia, from Moldova to Armenia, that were either internally conflicted about joining the West, unable to do so due to external influences, or both.

The “in between” obviously referred to the re-emerging division between the West and Russia. There was, in fact, no doubt already around the early 2000s that Russia would not only not Westernize, but that it was preparing to mount a new strategic challenge to the West. The challenge mainly revolved around undermining plans for NATO and EU enlargement (“encirclement” from Moscow’s standpoint), especially in Russia’s “near abroad,” a flexible notion that could be stretched to encompass the former borders of the Soviet Union.

Fast forward to the present day, the geopolitical map of Europe and neighboring regions has changed profoundly, although our mental maps are only slowly catching up. Countries in between are still there, but they are now squeezed between new, less clearly identifiable entities. The West seems to have lost its compass, and with it its hegemonic influence. It is now cut across by the same nationalist and illiberal tendencies that it had historically come together to counter. While neither NATO nor the EU is at any serious risk of coming undone at present, their resilience has been repeatedly, and severely, tested in recent years by the re-emergence of Europe’s historical divisions and a post-exceptionalist U.S. that is increasingly reluctant to define its national interest expansively.

The U.S. and the EU remain at core functioning democracies, but checks and balances — and the appeal itself of a liberal pluralist society — have been challenged by key constituencies, starting with much of the current Washington political elite. What is more, the collective capacity to preserve and expand the order that they created together after World War II has been seriously, perhaps irrevocably, undermined.

Almost paradoxically, countries around the periphery of the EU and NATO often remain more interested in these institutions than existing members, whether old or new. Yet, the countries in between are still very much stuck in the middle, either because their internal situation remains complex or because of external interference, from disinformation warfare to more straightforward armed aggression. These tools are no doubt aimed at indefinitely prolonging a state of domestic instability in these countries. Against this backdrop, the question of whether they can still count on their Western partners is not a trivial one.

Faced with a combative Russia, the U.S. remains the staunchest advocate for some of these countries. But this assertive posture can hardly be squared with the Washington that is also struggling with toxic polarization, culture wars, and illiberal tendencies not seen since the interwar period, if ever. More poignantly, current U.S. policy no longer sees Europeanization to be in the American interest.

For its part, an embattled EU has barely weathered years of existential crisis. It only now seems to realize that its mostly bureaucratic approach to EU enlargement and EU partnership in the neighborhood does not work. In some cases, it has dramatically backfired, as when a move to associate Ukraine more closely with the EU market triggered a retaliatory reaction from Moscow and pro-Russian interests.

It remains to be seen whether the self-styled first “geopolitical” European Commission, which was just sworn into office, will pursue a realism of restraint or one of ambition. The positions of French President Emmanuel Macron — who has been arguing for a strong and strategically autonomous Europe, but also one that can get along with Moscow and that will only resume enlarging once internally reformed — reflect the contrasting impulses currently cutting across the European political elites.

Meanwhile, the South no longer provides a “ring of well-governed states,” as envisaged by the European Security Strategy in the early 2000s. It rather resembles a “ring of fire,” as some have put it. In a legitimate attempt to respond after the 9/11 terrorist attacks, the U.S. has carried out interventions in the Middle East that have mired it in the region’s many unresolved conflicts, with U.S. policy swinging wildly between the democracy promotion and the nation-building delusions of the early 2000s to the more recent cynicism and disengagement.

While U.S. policies have exposed Europe to instability, because of the many security spillovers of military interventions, U.S. core interests were not well served either: Iran has greater regional influence, not less, as a result of almost two decades of heavy-handed U.S. engagement in the region; conversely, Israel is more isolated (and now also more internally divided) than it was in the 1990s; and jihadist terrorism remains a formidable threat, even after the defeat of the self-styled Islamic State.

Russia’s game and the new “in-between”

More crucially, the partial retreat of the U.S. from the region under the current administration, only partly offset by the attempt to create a new regional axis against Iran, has given other players, most notably Russia but also Iran and Turkey, an entry point that was not available before. While Turkey, a NATO ally since 1952, may be tempted by strategic de-alignment, Moscow has inserted itself in the Syrian conflict as well as other contexts, backed by the use of significant military assets, calling the shots where the West could not or did not want to.

Russia’s southern strategy, to the extent that there is one, promises to restore that (state) stability that America never fully guaranteed and actually contributed to undermining after 9/11. In a turn of events that is reshaping the geopolitics of not only of Europe but also of the Middle East and Black Sea region, Russia has pushed back against the enlargement of the Western order and created new connections along a North-South axis. Its foreign policy engagement has appealed to a number of regimes (and communities) that feel relieved by a return to more traditional (and less liberal) international politics.

While the West looked weak, self-absorbed, and increasingly scared by “pressures” emanating from the South — a sentiment that has led to viewing migrants and refugees coming on boats as a threat to European security — Russia has on the contrary presented itself as the new bridge builder, the power broker who does not come to export values but to preserve the traditional principles local states are eager to protect.

These dramatic developments beg a question: what stands now in between a shrinking West and the rest? A new realism suggests that despite the clashes of values, interests, and foreign policies, the U.S., EU, and Russia are bound to come together, as the reunited “children of the Enlightenment,” to face the “real” East — that is, China and its strategic ascent. But a more sober, and perhaps also more honest, assessment would refocus from global geopolitics to the region itself, finally putting the countries in between — with their changing societies, their evolving needs, their various constituencies — at the center.

Time will tell whether this vast and highly composite area that was in between and was often defined by what it was not, will now contribute to define what will come next. What is already clear though is that we have to get used to paying more attention to this region, putting local dynamics increasingly into focus, lest we let other actors define for us what the new East-West and North-South divides will be about in the more fuzzy post-Cold War paradigm that is emerging.

Emiliano Alessandri has managed the OSCE's Mediterranean Partnership portfolio since 2013. He is a non-resident scholar with MEI and an expert on Euro-Mediterranean relations with a focus on North Africa. The views expressed in this article are his own.