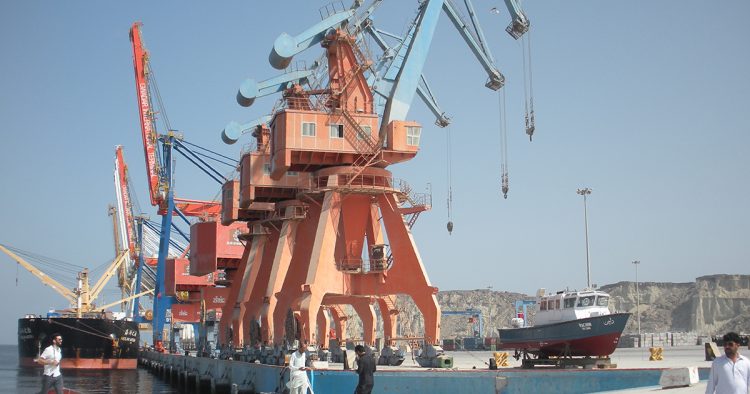 Landlocked Afghanistan has begun using the Chinese-operated Pakistani port of Gwadar for transit trade — a development Pakistani officials see as marking the start of Gwadar’s role as a gateway port through the China-Pakistan Economic Corridor.

Pakistan’s hope to develop the Arabian Sea port into a gateway for Afghanistan, Central Asia, and China’s Xinjiang region has been a long-standing one — and it is misguided. Islamabad should instead focus on local drivers to build the port and use it as a vehicle to develop the impoverished, but resource-rich region of southern Balochistan.

Arthur D. Little, the company that developed the original Gwadar master plan in 2006, recommended a locally driven business strategy. It assessed that transit trade with the Central Asian republics “has little potential.”

Despite such guidance, successive Pakistani governments have clung to the gateway port dream, going so far as to subsidize its nominal use.

Gwadar has seen and will continue to see improvements to its hinterland connectivity. An expressway offering a direct route from the port to the national highway network, bypassing residential areas, may be completed by next spring.

But Islamabad lacks a coherent broader maritime commercial strategy. And it’s unclear how the redirection of Afghan transit trade to Gwadar fits into it. Is Islamabad’s aim to draw ships to the idle port or, more broadly, bring back to Pakistan business lost to Iranian ports in recent years? Either way, the Gwadar transit trade bet is a bad one for several reasons.

One, while Afghanistan, Central Asia states, and Xinjiang may be landlocked, they have a range of options for access to sea that are cheaper and more efficient than Pakistani ones, even though Pakistan is generally the shortest distance to sea.

Notably, Afghanistan has in recent years shifted away from Pakistani ports for transit trade, relying instead on Iran to reach India and other markets. Cheap diesel fuel drives down ground transport costs in Iran. And a special exemption from U.S. sanctions allows Afghanistan to continue to use the port of Chabahar in southeastern Iran.

Turkmenistan, which does not enjoy a sanctions exemption, has instead diverted its Iran transit trade to the South Caucasus. And despite a transit trade agreement with Pakistan, Kyrgyzstan makes greater use of China’s heavily subsidized and efficient railway network.

Landlocked countries and subregions divert their trade elsewhere in large part because Pakistan is a costlier and more time-consuming transit corridor, according to an Asian Development Bank (ADB) assessment published earlier this year. Dwell times at Pakistan’s maritime ports and customs clearance at ports and border crossings are the longest among Central Asia Regional Economic Cooperation Program (CAREC) corridors. These delays, which result in accumulated demurrage charges (penalties for failing to unload cargo within the allotted time), combined with higher ground transportation costs, make Pakistan an expensive transit route.

To its credit, Pakistan has taken measures to address some of these weaknesses. For example, its expansion of operations at the Torkham border crossing with Afghanistan to a 24/7 schedule has significantly cut clearance time for shipments, according to the ADB. Paired with more efficient operations at the Gwadar port — where dwell times, officials there say, are only seven hours — may appease disgruntled Afghan traders. But it will likely simply pull business away from Karachi and Port Qasim rather than ports in other countries. And while this may benefit Gwadar specifically, it may not serve Pakistan’s broader goal of becoming a trade corridor.

Compared to Gwadar, Karachi and Port Qasim are better gateway and transshipment options. They can handle larger vessels, have superior hinterland connectivity as well as underutilized capacity, despite recent expansions. Karachi, for example, boasts a new deep-water container terminal capable of handling vessels 16 meters in draft, compared to 12.5 meters in Gwadar and 12-13 meters in Port Qasim. Despite the expansion in handling capacity, Karachi and Port Qasim witnessed a decline in transshipment volumes from 2016 to 2019, according to Pakistan’s Ministry of Maritime Affairs.

According to one assessment, for Gwadar to become a full-fledged gateway port, rail connectivity is necessary. But that is probably more than a decade away. During this time, the hinterland connectivity of competing ports in the region will improve significantly, increasing Gwadar’s comparative deficiencies.

In the coming years, Pakistan’s network of motorways will be fully extended to Karachi. And over the course of this decade, the main railway line from Karachi to Peshawar is likely to be revamped, allowing for faster and more reliable freight service. To leverage both of these enhancements, the government of Pakistan will need to devote its energy to constructing direct hinterland connectivity from the Karachi port, bypassing the city’s congested roads.

Down the road, Gwadar may attract some meaningful transshipment volume. Port officials say it can be dredged to a depth of 20 meters. But at the moment the Gwadar transit trade push is probably more about Pakistani ports competing against one another — with the transit trade and transshipment businesses failing to see meaningful growth overall.

Linking up with the Belt and Road

Pakistani officials tend to view to Gwadar’s rise as a gateway port as almost inevitable due to its linkage to the Belt and Road Initiative. As talk of a U.S.-China Cold War gains steam, some Pakistani strategists see the port as vital to China’s energy and maritime security.

But Gwadar faces competition from a number of other Chinese maritime port investments in the broader region, including in Colombo and Hambantota in Sri Lanka and Khalifa Port in Abu Dhabi, and potential future investments in the Makran coastal region — a strategic area that begins just outside the Strait of Hormuz in Ra’s al-Kuh in Iran’s Hormozgan Province and stretches across the Pakistani border through Gwadar, ending in the outskirts of Karachi.

The Makran coastal region in Balochistan is home to several undeveloped oceanic ports that may eventually serve various Chinese commercial and strategic objectives. These include Jask, which could be connected to Iran’s oil pipeline network and was identified in the draft China-Iran economic and security agreement. Iran has also floated potential Chinese involvement in Chabahar, though this is perhaps just to put pressure on its main sponsor, India.

Given the competitive regional environment, Gwadar will need multiple local drivers of growth. The port should serve as a vehicle for the development of Pakistan’s Makran coastal region and broader southern Balochistan, anchored on industrial activity in the port’s planned industrial zones, mineral exports, and tourism.

A Gwadar growth strategy should leverage southern Balochistan’s strengths — its long, unexploited coastline and its abundance of minerals — to address its endemic challenges. The water-starved region needs small dams and efficient desalination projects to provide locals with drinking water and feed cash crops. A network of agricultural cold storage and processing facilities, and roads leading to Gwadar can provide local growers with access to markets in Pakistan and beyond.

As domestic tourism booms in Pakistan, Gwadar’s scenic beaches are a natural draw. A broader cultural tourism infrastructure would help generate sustained inflows and build the trust of the local population in the insurgency-prone region. An anchor destination — consisting of a museum, performance hall, and grand bazaar celebrating local Baloch culture, and its linkages with East Africa and Oman, as well as the broader Silk Road and Indian Ocean region — would signal respect for locals and generate hospitality industry jobs.

Pakistan’s gateway port dream for Gwadar is a long way from fruition. Right now, the city needs a growth strategy that centers the region’s native population.