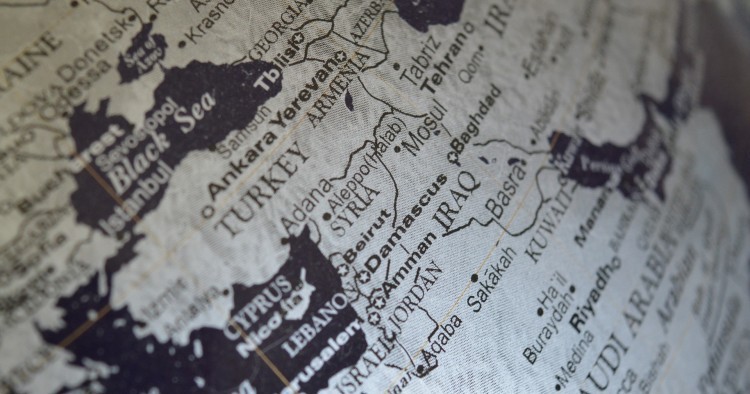 The Middle East’s rich history of cultures and civilizations has, in the modern era, given way to a caricature of a land of strife and violence. For those who today inhabit the cradle of civilization, that caricature is often too close to the truth — too many have been relegated to a life of poverty, while even those who live well frequently lack security and stability. Yet in the spirit of the region’s people, the pride of their ancient history lives on. Today, as the Islamic Republic in Iran faces a deep legitimacy crisis, historic change is once again afoot in the Middle East. As the people of Iran and the region rise up against the regime in Tehran, it is time to prepare for what comes next and imagine what could lead to the region’s next renaissance: a Middle Eastern cooperative organization.

Some will recall that the Middle East was in the midst of just such a renaissance 50 years ago, when it was said that Baghdad was more bustling than London, that Beirut was Paris on the Mediterranean, and that Tehran’s art scene was putting New York’s to shame. Many parts of the region were living up to its ancient promise as a center of culture, progress, and tolerance. There weren’t the endless wars or military engagements. The region certainly wasn’t perfect, but it was progressing. None of this was accidental. Rather, it was part of a vision shared by the Shah of Iran and other reform-minded leaders in the region, like King Hussein of Jordan and President Fuad Chehab of Lebanon. They believed in great civilizations and represented a forward-thinking, independent wave sweeping the region.

After decades of British, French, American, and Russian interventions, the Shah was determined to build a strong, independent Iran that rather than subverting its neighbors, partnered with them. He formed a productive friendship with Egyptian President Anwar Sadat and established ties with Israel. He kept the peace with Iraq’s belligerent dictator, Saddam Hussein, and forged constructive relationships with Saudi Arabia and other Arab states. He engineered these relationships to build regional stability that led to growing prosperity, thus keeping a tight lid on terrorism. The rising tide of the Persian Gulf, as it were, lifted all boats.

However, that vision was not without opposition. Forces including non-traditional Shiite clergy in Iran began to attack him for what they claimed was increasing foreign influence. His efforts to build Iran into a leading international player, one which acted in concert with other regional and global forces, were viewed as an assault on tradition. Middle Eastern cooperation also faced pushback from regional forces including Nasserists in Egypt and the Soviet-backed Iraqi revolutionary government, who viewed such attempts as Western meddling.

A Middle East free of the machinations of foreign powers

In reality, what these leaders envisioned was a Middle East free of the machinations of foreign powers. They approached this through two projects, the Central Treaty Organization (CENTO), also known as the Baghdad Pact, and the Regional Cooperation for Development (RCD). Both organizations, regional cooperatives dedicated to mutual security and socio-economic development, partnered with the West, but were underpinned by the membership of Iran, Pakistan, and Turkey. With CENTO expanding its joint training missions and military cooperation, in 1974 the Shah proposed an economic community that “would lead to security and political solidarity” and “economic interrelationship.”

He was never able to achieve this, however. In 1979 the Shah was overthrown by the Islamic Revolution, and Iran’s foreign policy shifted from a refusal “to dominate any other country” to the forced exportation of Ruhollah Khomeini's revolution to the region at any cost. The new Islamic Republic withdrew Iran from the collaborative frameworks of CENTO and RCD immediately. Perhaps not satisfied to kill just the agreements, Khomeini executed the former CENTO secretary-general for “corruption on earth.” This shift from brotherhood to belligerence led to a series of falling dominos including Afghanistan, the Arab-Israeli peace process, and the Iran-Iraq war. The dominos continue to fall today.

After four decades of Khomeini’s revolutionary regime, the people of Iran and the region are rising up. The Islamic Republic is facing protests at home while its proxies abroad face significant pushback from the people of Syria and Iraq. In Lebanon, its oldest and most entrenched proxy, Hezbollah, faces renewed scrutiny and growing opposition in the wake of the Beirut port explosion. Protesters have demand an unequivocal end to the Islamic Republic’s influence in their country and its politics.

Given trouble in the Islamic Republic’s client states and the burgeoning prospects for peace between long-time foes, the Middle East appears to be on the precipice of a new historical moment. An Iran and a Middle East free from the Islamic Republic and its proxies would open the door to many possibilities. Now is the time to think beyond pedestrian political disputes and imagine, as the Shah and his allies once did, the region as a powerful, unified force in international politics and commerce. An economic and security cooperative between the nations of the Middle East could accomplish just that.

A regional economic and security cooperative

Such a cooperative must be based, first and foremost, on the principle that peace can “be best established” if “countries kept their influence, their power, within the limits of their territory.” With the principle of non-aggression established, the cooperative must attend to pressing regional issues including the Syrian genocide, the refugee crisis, and terrorism. The collaborative nature of such an institution would allow for deliberative discussions involving all parties in the region to find local solutions for local problems as opposed to waiting for often ineffective interventions from global powers.

Such an arrangement would represent a major improvement on current models like the Arab League and the Gulf Cooperation Council (GCC); unlike them, a cooperative would include all countries in the broader region and would have more focused objectives. At its outset the GCC intended to establish a common market and common currency, neither of which it has achieved, and neither of which is necessarily desirable. A more focused set of objectives taken on cooperatively, without sacrificing the prerogatives of national sovereignty, would allow the body to be more sustainable and avoid the troubles of other organizations that settle in an often uncomfortable middle ground.

At a time when peoples across the region are fighting to restore their national sovereignty usurped by the Islamic Republic, such a cooperative would not hinder nationalistic aims. Rather, by uniting around common interests, namely to strengthen the region on the global stage, it could serve to enhance them. An Iranian government communique to the United States in 1975 put it well: “Iranian and Arab nationalisms need not be mutually exclusive. In a region … fighting for the elimination of all traces of the colonial presence forward-looking movements of nationalism could, indeed, be complementary.”

The decades-long military involvement of foreign powers in the Middle East has been, in part, an attempt to respond to the chaos cultivated by the Islamic Republic. Regrettably, it has left the people of the region feeling as if their destiny is determined in foreign capitals, and for the citizens of the United States and other nations it has come at a high cost, both economic and human.

Such a cooperative would provide a more legitimate and effective way of addressing the security threats posed by terrorist organizations. The threat these groups present is not only to individuals nations but also to the region as a whole, and as such, they must be countered by the region as a whole. Instead of an endless game of Whack-a-Mole, the challenge of terrorism in the Middle East demands a comprehensive strategy. Problems that flow across borders, such as terrorism or tragedies like the Syrian genocide and resulting refugee crisis, demand regional solutions. By coming together in a collective security framework, the countries of the Middle East can share resources and develop a united strategy to solve the region’s decades-long quandaries.

With experience in tackling security issues, the organization must also address critical economic challenges like diversification and development. The Shah once proposed a body made up of industrialized, oil-rich, and developing nations, each with an equal vote, to provide easy-money loans for developing countries. Such joint economic schemes, financed by wealthy member nations with equal input from developing ones, could prioritize regional development projects meant to diversify economies away from reliance on petroleum and natural gas and support moves into other sectors, including tourism, services, and hard industry. This would allow for co-investment from regional economic powerhouses and would also support the developing countries of the region, including Iraq, Yemen, and Afghanistan.

The notion of a joint Jordanian, Iranian, and Israeli squadron of jets flying on an anti-ISIS mission or a joint Kuwaiti, Emirati, and Lebanese economic venture may, today, seem far-fetched. Yet in the aftermath of World War II, so did the notion that there might ever be a lasting alliance between Germany, France, and the United Kingdom. From the first declaration of human rights to the development of music and mathematics, the people of the Middle East are no strangers to taking on big challenges.

Four decades ago, Mohammad Reza Shah Pahlavi defined the stakes: “If you let go occasions of cooperation that could have been, while you have the time and the opportunity to bring people together, cement ties and assure cooperation and stability, then history and the people who come after us will reproach us for not having tried.” This stark warning is perhaps even more relevant today than it was then. As the people of Iran reclaim their country from the Islamic Republic and the people of the region follow suit, the Middle East’s leaders must try to “assure cooperation and stability.” For the “the time and opportunity to bring people together” is indeed approaching and it may not last for long.

Cameron Khansarinia is the Policy Director for the National Union for Democracy in Iran (NUFDI), a nonpartisan, nonprofit organization of Iranian-Americans raising awareness about the freedom movement in Iran. The views expressed in this piece are his own.