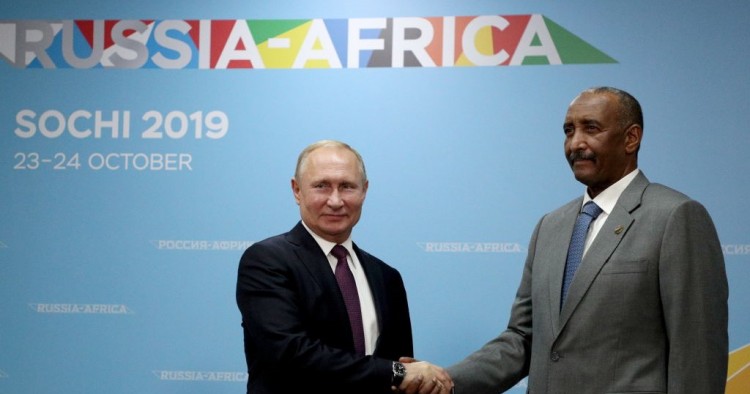 On Oct. 23, Russian President Vladimir Putin met with Chairman of Sudan’s Sovereign Council Abdel Fattah al-Burhan in Sochi. After their meeting, Putin praised Sudan’s reliability as a Russian ally and said that the formation of the council was a critical step toward a path of “sustainable development” in Sudan.

The cordial meeting between Putin and Burhan came less than one month after Russian Foreign Minister Sergey Lavrov met with Prime Minister Abdalla Hamdok on the sidelines of the UN General Assembly and underscored the resilience of the Russia-Sudan bilateral relationship.

In spite of Russia’s overt support for authoritarian rule in Sudan, on Aug. 19, the Russian Foreign Ministry enthusiastically backed the power-sharing agreement between the Sudanese army and the opposition. Since this agreement, Russia has implemented a two-track engagement strategy with Khartoum, which allows it to maintain positive relations with Sudan’s military establishment and with civilian policymakers, who are increasingly focused on economic development.

Although Sudan is in the midst of a transition to civilian rule, with elections slated for 2022, Russia still views the Sudanese military as a kingmaker that will guarantee the country’s long-term stability. In Russian academic circles, the 1985-89 failed transition is viewed as proof of the intrinsic instability of civilian rule in Sudan, and there are concerns that Sudan will succumb to an unstable coalition between “tribal groups and Sufi brotherhoods.” Kirill Semenov, a prominent Moscow-based defense analyst, told me in a recent interview that Russia supports a military-brokered transition in Sudan, and hopes to strengthen its person-to-person links with the Sudanese military to ensure that it can compete with China for long-term geopolitical influence.

In order to strengthen institutional bonds between the Russian and Sudanese militaries, Moscow has unveiled joint projects with Khartoum in the security sphere. During the Russia-Africa Economic Forum held in Sochi on Oct. 23-24, Putin vowed to implement a wide array of Russia-Sudan defense agreements designed to reform the Sudanese military and enhance the capabilities of the Sudanese Armed Forces. Russia also remains intent on constructing a naval base in the country to bolster its influence on the Red Sea, and on implementing a Bashir-era agreement that gives Russian warships access to Sudanese ports.

To appeal to Sudan’s civilian authorities, Russia has supported Hamdok’s efforts to help the country escape its isolation from international financial markets. Russia’s involvement in Sudan’s economic crisis dates back to late 2018, when the Russian government hosted an inter-ministerial trade meeting with Sudan in Moscow and allegedly deposited $1 billion in the Sudanese central bank to halt the devaluation of its currency.

After the April coup, Russia stepped up its joint mining ventures with Sudan and also increased its wheat exports to the country, to stave off further inflation-inspired unrest. Putin’s emphasis on economic and investment cooperation during his meeting with Burhan and Hamdok’s dialogue with Lavrov about expanding Sudan-Russia educational exchanges suggest that economic cooperation is a central component of the bilateral relationship.

Although Russia’s two-track engagement strategy has been largely successful, there are countervailing forces against a strengthened Russia-Sudan partnership. Russia’s efforts to subvert Sudan’s democratic transition have severely tarnished its image among the local population. In June, leaked documents showed that Russian PMCs had advised the TMC to repress civilians if it resulted in a “minimal but acceptable loss of life,” and on Oct. 30, Facebook exposed an elaborate Russian disinformation campaign in Sudan that consisted of 20 fake accounts. In addition, the United States has engaged in serious discussions about removing Sudan from its list of state sponsors of terrorism, and the carrot of U.S.-backed International Monetary Fund support could prompt Sudan to distance itself from Russia.

To burnish its image among the Sudanese public, Russia has leveraged its extensive media presence in Sudan. RT Arabic is the second-most-watched international Arabic language media outlet in Sudan, after Al Jazeera, and its extensive use of social media has broadened its outreach to Sudanese people under age 30. Russian media outlets have consistently highlighted Moscow’s purported commitment to non-interference in Sudan, in contrast to alleged Western meddling, and emphasized Russia’s long-standing friendship with Sudan. While the success of these soft power initiatives is unclear, Russia is actively seeking to distance itself from allegations that it is promoting autocracy, which have sullied its reputation.

To hedge against improving U.S.-Sudan relations and to secure a durable regional foothold, Russia is diversifying its diplomatic partnerships in eastern Africa. In March, Russia abstained from a vote that criticized South Sudan’s leadership for stalling the peace process, and in June, Russian Deputy Foreign Minister Mikhail Bogdanov met with South Sudan Vice President Taban Deng Gai to discuss conflict resolution strategies. Ahead of the Russia-Africa Economic Forum, Putin announced his decision to forgive Ethiopia’s $163.6 million in debt to Moscow as part of Russia’s debt-for-development program. These outreach efforts signal that Russia views Sudan as an important partner — but not the sole fulcrum of its regional influence — and allow Moscow to adapt to any potential deterioration of its relationship with Khartoum.

Through a synthesis of targeted diplomatic outreach, economic and security incentives, and soft-power-building efforts, Russia has preserved its leverage in Sudan during a year of severe political turmoil. Due to Sudan’s strategic location on the Red Sea and long history of aligning with Russia on diplomatic crises ranging from the annexation of Crimea to the Syrian civil war, Russia has a vested interest in the country’s political future and will try to shape the course of its transition to democracy in the months to come.

Samuel Ramani is a doctoral candidate at the Department of Politics and International Relations at St. Antony’s College, University of Oxford. His research focuses on Russia’s policy toward the Middle East. He can be followed on Twitter@samramani2.