The Return of Iraqi Shi‘i Militias to Syria 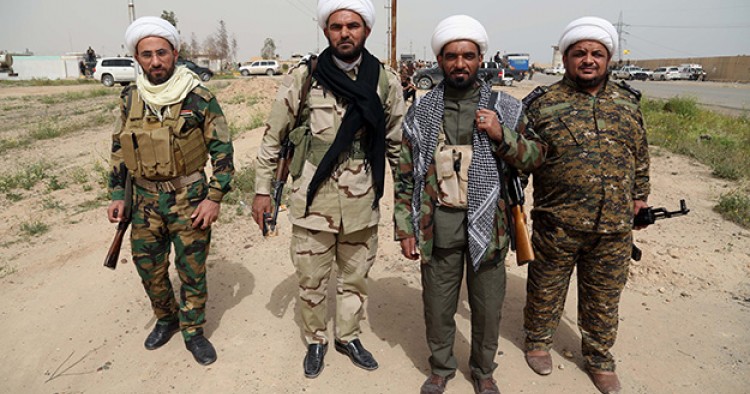 It has long been known that the Assad regime, facing a shortage of manpower in its regular army, has had to rely on irregular paramilitaries in its bid to reverse rebel advances. This became particularly apparent in 2013, when Hezbollah openly declared its participation in the capture of Qusayr, a town in Homs Province on the border with Lebanon.

Since then, the presence inside Syria of Iraqi Shi‘i militias, most of them proxies of Iran, has been extensively documented. When the militias first appeared in 2013, they claimed to defend the Sayeda Zainab shrine in Damascus. Though there is some validity to this narrative in that jihadi rebels, who have influence in the Damascus area, would consider the shrine to be a religious affront that should be destroyed, the militias’ involvement in fighting went far beyond the Sayeda Zainab area. This demonstrates an effort by Iran to mobilize its proxies to help secure the Assad regime’s survival in western Syria.

Most of these fighters then left Syria by the end of the summer of 2014 to focus on the Iraqi home front, but in past months many have come back to Syria. The security situation in Iraq has stabilized to some degree so that ISIS is no longer seen as an imminent threat to Baghdad and the Shi‘i holy sites at the heavily garrisoned city of Samarra. In addition, ISIS has been driven back from besieged Shi‘i towns such as Amerli, and Shi‘i militias and regular armed forces on the whole now find themselves on the offense against ISIS, expelling the group from all major towns in Diyala and Babil Provinces and currently attempting to retake the Tikrit area.

As a result of this shift in military dynamics in favor of Iraq’s government, many of the familiar Shi‘i militias have reappeared in Syria, with contingents now fighting in both countries. One example is Liwa Dhu al-Fiqar, which first emerged in 2013 and portrays itself as loyal to cleric Muqtada al-Sadr, even though Sadr has never officially sanctioned the Shi‘i militia effort inside Syria. The group’s spokesman, Salam al-Safir, confirmed in September 2014 the withdrawal of the group’s members to Iraq.[1] Yet since December 2014, evidence indicates the group’s reemergence in Damascus. As Liwa Dhu al-Fiqar’s leader Hayder al-Juburi put it in mid-January 2015, “Yes, [we are] in al-Sham within the sector of responsibility because the holy sites are one, whether in Iraq or any place and at any time.”[2] Liwa Dhu al-Fiqar’s recent involvement in fighting in northeast Latakia Province puts into doubt the group’s narrative as having returned to Syria to defend Shi‘i holy sites.[3]

Media reports on Assad’s recent offensive launched in Deraa and Quneitra to reclaim southern border territories from the rebels have mostly focused on the participation of the Syrian Army, Hezbollah, and the Iranian Revolutionary Guards, when in fact an Iraqi proxy of Iran, Kata’ib Sayyid al-Shuhada, which first emerged in Syria, is also participating.[6] Its participation is officially presented as part of the narrative of defending Sayeda Zainab.

On January 25, 2015, prior to the launch of the offensive, Kata’ib Sayyid al-Shuhada announced on its website the passing of two “martyrs” who had died fighting in defense of Sayeda Zainab—a clear reference to operations in Syria.[7] For the group’s involvement in the Deraa-Quneitra offensive, one must look beyond the official website. Al-Anwar 2, an Iraqi television channel,[8] produced a documentary on Kata’ib Sayyid al-Shuhada’s participation in the offensive, entitled The Men of God in Syria, in which the fighters present their effort as part of defending Sayeda Zainab and at one point affirm that they are in Deraa province, just 20 kilometers away from Israel.[9] Kata’ib Sayyid al-Shuhada’s participation in the Deraa-Quneitra offensive[10] alongside other Iranian proxies and Iranian personnel points to Iran’s aim of opening up a potential front in the Golan region against Israel.[11]

Further north, a more diverse set of irregular actors has emerged.[12] In contrast to the situation in 2013, nothing currently suggests the involvement of Asa’ib Ahl al-Haq—another Iranian proxy in Iraq—in the fighting in Aleppo, where it previously had an official contingent known as Liwa Kafeel Zainab.[13] However, the current participation of another Iraqi Shi‘i proxy of Iran, Harakat Hezbollah al-Nujaba,[14] whose fighters first emerged in Syria in 2013 under a variety of brands such as Liwa Ammar ibn Yasir,[15] compensates for that absence. Yet media reports have again tended to overlook this ongoing Iraqi participation in Aleppo, focusing instead on the undeniable role of Hezbollah and Afghan Shi‘i fighters.

The involvement of foreign Shi‘i fighters still appears to be crucial for the regime as it seeks to consolidate control of western Syria from Deraa north to Aleppo. This does not mean that most of the fighters supporting the regime are foreign, but the reemergence of Iraqi Shi‘i fighters in Syria should be more widely recognized as a sign of the consolidation of militia dominance—of those that are Iranian proxies, above all—in Iraq and the relative stabilization of the security situation there.

[3] Post on Facebook by Ali Hayder, March 6, 2015. In this statement, on the claimed capture of the Slunfeh resort to the northeast of Latakia city, the victory is presented as one over “the gangs of disbelief [kufr] and error from Daesh [ISIS] and those with them and aligned with them.” The additional narrative of fighting ISIS within Syria has gained increasing currency among the Shi‘i militias. In this case, it is a false claim, as ISIS withdrew from Latakia Province in early 2014.

[4] Author conversation with Marwan al-Asadi, an Iraqi Shi‘i militiaman currently in Jaramana, Damascus, March 1, 2015. These groups’ professed loyalty to Muqtada al-Sadr is best illustrated by their recent social media output. For example, on February 11, 2015, Salam al-Safir posted a photo purportedly near Jaramana with portraits of Muqtada al-Sadr, Muqtada’s father, and Assad in the background. Similarly, on February 12, 2015, a Facebook page featured a photo of the leaders of Liwa al-Imam al-Hussein and Liwa Dhu al-Fiqar and a commander of the Rapid Intervention Regiment at the base of Liwa al-Imam al-Hussein. In the background, one can see a portrait of Muqtada al-Sadr and Assad together. Another portrait featuring Hezbollah leader Hassan Nasrallah highlights the group’s cooperation with Hezbollah in Damascus. For more on the working relationship between these militias, see Aymenn Jawad al-Tamimi, “Saraya al-Khorasani 31 August Statement: Translation and Analysis,” Aymenn Jawad al-Tamimi blog, August 31, 2014.

The officially proclaimed loyalty to Muqtada al-Sadr needs to be treated with some caution, as one risks seeing it as an outpouring of Sadrist zeal organized by the cleric to fight in Syria. Iran in particular would have an interest in supporting and encouraging the phenomenon of Sadrist-leaning militias in order to portray the Shi‘i militia effort as a “pan-Shi‘i” jihad whose net effect is to secure more recruits for the cause and to bolster the military standing of its ally, the Assad regime. For more on this point, see Phillip Smyth, “The Shiite Jihad in Syria and its Regional Effects,” Washington Institute for Near East Policy, February 2015, 17-18, http://www.washingtoninstitute.org/uploads/Documents/pubs/PolicyFocus138-v3.pdf.

[6] This was first confirmed in a conversation on a Kata’ib Sayyid al-Shuhada Facebook page, February 15, 2015.

[8] The channel officially claims to be “independent.”

[10] This was also affirmed to the author by Marwan al-Asadi.

[12] This includes native Syrian militias such as the National Ideological Resistance, a Syrian Hezbollah brand that has participated in the push to break the rebel siege on the two Shi‘i Aleppo villages of Nubl and Zahra. The group recently claimed a fighter from Zahra was killed in the Ratyan area.

[13] This group is also known as Liwa Kafil Zainab; its participation in Damascus fighting was affirmed in a conversation with Marwan al-Asadi.