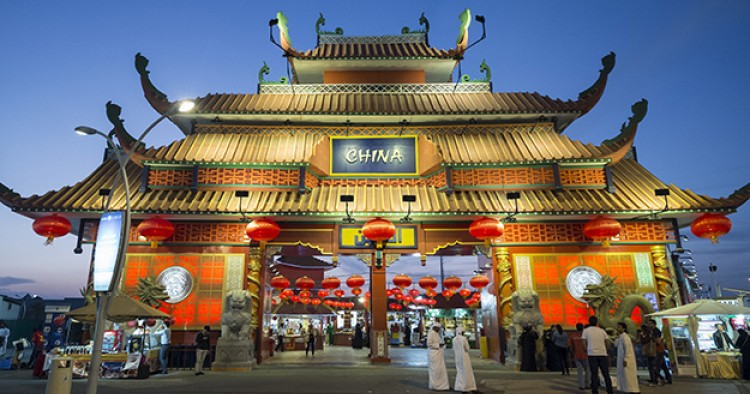 The flow of oil and gas from the Persian Gulf to East Asia has rejuvenated the ancient Silk Road, refashioning new networks of collaboration. The energy trade―the backbone of Sino-Middle Eastern ties―has provided the foundation for an increasingly diversified and robust set of relationships between China and the Gulf monarchies. The multidimensional strategic partnership between China and the UAE, in particular, is illustrative of this broader pattern.

China and the UAE established diplomatic relations in 1984 and in 2012 forged a strategic partnership.[1] During and since that time, the UAE has become a crucial partner for China, benefiting greatly from the latter’s rise. Some 60 percent of China’s total exports pass through the UAE, from where they are re-exported to Africa and Europe, and China alone accounts for ten percent of the UAE’s total non-oil trade.[2] There are currently more than 300,000 Chinese nationals living and working in the UAE, in addition to over 4,200 Chinese companies, 356 trade agencies, and more than 2,500 Chinese trade labels registered therein.[3]

The Emirates constitute the largest Middle East market for Chinese products.[4] Over the past decade, bilateral trade between China and the UAE has grown exponentially,[5] with non-oil trade soaring from $2.8 billion in 2001[6] to $47.7 billion in 2014.[7] The increase in bilateral trade has resulted in, and been strengthened by, closer financial ties – most clearly demonstrated in the Chinese yuan’s higher presence in the Middle Eastern financial center. Indeed, prominent financial practitioners have indicated that the UAE should be the Middle East’s trading hub for the yuan.[8] Banks operating in Dubai, including HSBC, Standard Chartered, and Mashreq, have already begun offering business-banking services denominated in yuan.

Meanwhile, Emirati banks continue to expand their business in China. The Union National Bank was the first to open a representative office in Shanghai in 2007. Since then, the National Bank of Abu Dhabi has established representative offices in Shanghai and Hong Kong, and in 2012, Emirates NBD opened a Beijing office, making it the first office of a Middle Eastern bank to be established in the Chinese capital.[9] These Emirati banks have been expanding in China, opening branches and representative offices on the mainland and in Hong Kong, leading to a boost in transactions using yuan. In 2012, Emirates NBD became the first bank in the Middle East and North Africa to issue a yuan “dim sum” bond.[10] In the same year, the UAE Central Bank signed a currency swap agreement worth 35 billion RMB ($5.5 billion, or 20.71 billion AED), a measure to boost trade and investment.[11] In March of this year, the Central Bank of the UAE and UnionPay International (UPI) of China signed a deal with UAE-Switch, a service that connects ATMs across the UAE. The service allows the use of UnionPay cards at over 4,800 ATMs across the UAE.[12] This latest joint cooperation came as a result of a steadily rising number of Chinese citizens, residents, tourists, and business people coming to the Emirates over the years.

Bilateral relations are more often than not presented to the world via individual actors, such as heads of state, diplomats, and businessmen. The China-UAE relationship is no exception. Their involvement with one another reveals two levels of engagement. At the state or national level, the two countries have established a strategic partnership, and at the subnational level, increasingly extensive interactions between provinces, emirates, NGOs, businessmen, companies, and tourists have been taking place.

Dubai―the most populous city in the UAE and the second-largest emirate after Abu Dhabi, with about only two percent of the UAE’s total oil reserves―is strategically located at the heart of several new trade corridors, including the SAMEA (South Asia, Middle East, Africa) and CHIMEA (China, India, Middle East, Africa) corridors.[13] Dubai handles nearly 80 percent of the UAE’s overall trade and is home to both the Middle East’s biggest port, in Jebel Ali, and its largest airport.[14] It is therefore not surprising that the metropolis has become a critically important commercial outpost for China. Of the more than 4,200 Chinese companies registered in the UAE, 2,500 are in Dubai.[15] The emirate is now home to more than 200,000 Chinese residents, constituting about ten percent of its total population.[16] In 2014, China overtook India to become Dubai’s largest non-oil trading partner.[17]

Six Chinese cities—Beijing, Guangzhou, Kunming, Shanghai, Urumqi, and Hong Kong—are connected to Dubai through direct flights that are offered more than 20 times a day.[18] These flights demonstrate that almost every part of China is now conveniently connected to Dubai. Unsurprisingly, such connections not only facilitate business exchanges but also tourism. According to the official Dubai tourism body DTCM, the number of Chinese tourists grew by 25 percent in 2014 over the previous year, attracting 344,000 people.[19]

An extensive range of interactions between Dubai and its Chinese counterparts have resulted in incremental financial exchanges between banks and other financial institutions. The Dubai International Financial Centre (DIFC) is currently home to four of China’s largest banks, including the Agricultural Bank of China, the Bank of China Middle East (Dubai) Limited,[20] the Industrial and Commercial Bank of China (Middle East) Limited, and China Construction Bank.[21] Meanwhile, in 2014, the Agricultural Bank of China, the country’s third-largest lender by assets, listed a one billion yuan bond on NASDAQ Dubai, which made it the first Chinese issuer to list a bond in the Middle East and North Africa.[22]

“Dubai Week in China” (May 9-15, 2015), held in Beijing and the largest event of its kind, was a significant milestone in the development of economic and cultural ties between the emirate and China.[23] The seven-day event, which presents Dubai to Chinese audiences, drew more than 15,000 attendees, ranging from government and corporate officials to thought leaders and the general public.[24]

Dubai is not the only emirate in the UAE that has experienced a rising Chinese wave. As the capital of the UAE and the largest emirate, Abu Dhabi is the most influential member of the nation. Unlike Dubai, Abu Dhabi is much more endowed with hydrocarbons and is an important member of OPEC, holding about 98 billion barrels of proven oil reserves. Western oil and gas giants ExxonMobil, Royal Dutch Shell, Total, and BP have been the dominant foreign players in the UAE concession system for decades. But a 2014 deal in which the state-owned China National Petroleum Corporation (CNPC) secured the rights to produce and export oil from Abu Dhabi shows that the emirate is pivoting its focus toward Asia.[25]

Even hydrocarbon-rich Abu Dhabi does not only view its Chinese counterparts through the single lens of energy supply and demand. Tourism is a case in point. China has become the third-largest overseas market for Abu Dhabi, overtaking the UK, India, and Germany.[26] Abu Dhabi received 120,350 visitors from China in 2014—a huge gain on figures from 2013.[27] In the first quarter of this year, there were about 64,000 Chinese guests checked into Abu Dhabi’s hotels and hotel apartments, almost double that of last year.[28] Dynamic tourism development has been feasible given the emirate’s advanced and accessible airway network. Abu Dhabi’s national carrier, Etihad, was the first UAE carrier to fly directly from the Gulf country to China when it launched nonstop flights to Beijing in the spring of 2008.[29] Etihad flies to Beijing, Chengdu, and Shanghai seven days a week; it also recently added a daily service to Hong Kong.[30]

As the third largest emirate in the UAE, Sharjah also enjoys a robust relationship with China. It hosts China’s largest exhibition in the Middle East, the Chinese Commodities Fair Sharjah (CCFS), which is considered to be a major booster of trade relations between China and the GCC states.[31] A rapid increase in bilateral trade between China and Sharjah has also taken place in recent years. The value of total trade exchanges—encompassing imports, exports, and re-exports—jumped more than 18 percent between 2010 and 2012, from $0.9 billion to more than $1.06 billion. That equals a compound annual growth rate of 8 percent.[32] The Sharjah Airport International Free Zone (SAIF) aims for a larger share of China’s trade with the UAE and seeks to lure more multinationals in the food and beverage sector. Currently, there are over 100 food and beverage companies in SAIF, which houses 6,800 companies from 149 nations.[33] In terms of increased connectedness through travel, Sharjah-based airline Air Arabia launched a direct five-hour flight to the northwestern Chinese city of Urumqi in February of this year.[34]

Marco Polo and Chinese Admiral Zheng He, together with countless merchants traveling across land and by sea, remind us of the golden days of the Silk Road. Since former U.S. Secretary of State Hillary Clinton rolled out America’s “New Silk Road Initiative” in October 2011, there has been a plethora of different conceptions of the New Silk Road. Chinese President Xi Jinping has proposed a “Silk Road Economic Belt” between western China and China’s Eurasian neighbors, in addition to continuing China’s decades-long efforts to build up infrastructure connections. South Korean President Park Geun-hye and Russian President Vladimir Putin have been pushing for an “Iron Silk Road Express” to connect the Trans-Siberian Railway to South Korea via the north. India has also delivered its “Connect Central Asia” policy on top of its backing of a multinational “New Silk Road” initiative to connect resource-rich Central Asia with India through a multibillion dollar infrastructure network. Japan has been establishing its own position in the game through foreign direct investment and engagement since Prime Minister Ryutaro Hashimoto introduced “Silk Road Diplomacy,” a precursor to the “Central Asia Plus Japan” initiative under the Koizumi administration.

Among such a proliferation of New Silk Road concepts, China so far seems to lead the pack. China has crystallized its dedication to a New Silk Road transcontinental project with the Belt-and-Road Initiative and the Asian Infrastructure Investment Bank (AIIB). By virtue of its location as well as its financial and commercial assets, the UAE is poised to play an important role in the development of the Belt-and-Road Initiative.[35] And as a founding member of the AIIB, the UAE has already shown the interest and the capacity to do so.[36]

China’s global sourcing of energy has triggered a fundamental structural change in the relationship between China and oil-gas exporters, as demonstrated by its burgeoning relations with the Emirates. The UAE’s geostrategic location, highly diversified economic profile, and distinctive status in the global trading system has made it an attractive gateway and springboard for China. The growing social and financial ties between the two countries have allowed China’s entrance, presence, and expansion into otherwise remote and unfamiliar markets in Europe and the MENA region. As a result of growing and mutually beneficial interaction in non-hydrocarbon trade, international finance, and transcontinental projects, the countries are moving closer to each other than ever before.

[10] Saadi, “UAE Financial Ties with China Were Years in the Making.”

[20] In February 2013, the Bank of China Middle East (Dubai) Limited opened for business in Dubai, which was the first business institution set up in the Middle East by the Bank of China. Founded in 1912, BOC is the only commercial bank that has been continuously operating for a century in China. It is also the commercial bank with the highest level of internationalization and diversity in the country. See “Bank of China Middle East (Dubai) Limited Opens for Business,” BOC News, February 26, 2013, http://www.boc.cn/en/bocinfo/bi1/201302/t20130227_2174744.html.