The road to justice for Syria goes through Europe 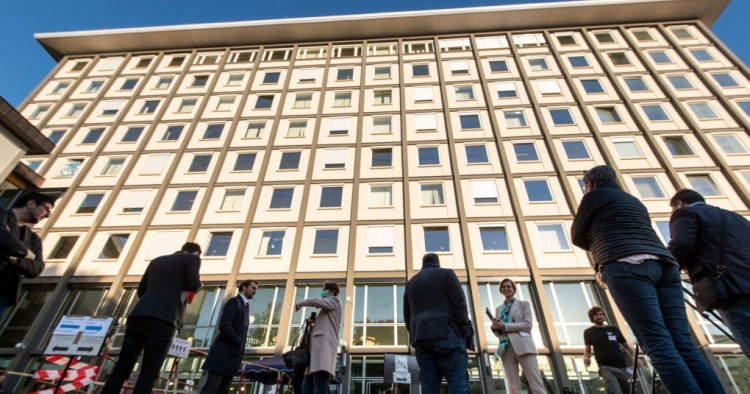 The road to accountability in Syria will undoubtedly be long, difficult, and imperfect. Nine years into one of the bloodiest and most well documented conflicts in history, Syria continues to see extreme levels of violence and regular violations of human rights.

However, in recent years and even months, there have been tangible steps taken toward criminal accountability, particularly in Europe. While still mere drops in the bucket, the maturity of international mechanisms, the clear political will of some European states to pursue justice, and the persistent engagement of displaced Syrians in Europe have resulted in some hope that the crimes committed in Syria will not go unaccounted for.

In 2016, the UN created the International Impartial and Independent Mechanism (IIIM) after dual Russian and Chinese vetoes of the UN Security Council resolution to refer Syria to the International Criminal Court in 2014. Unlike the UN Commission of Inquiry on Syria — established in August 2011 with a mandate to collect information, report on broad patterns of violations, and make recommendations — the IIIM’s mandate is focused on preparing the groundwork for prosecutions in national, regional, and international courts.

While no regional or international court has been established to date to prosecute the crimes committed in Syria, national courts in Europe have been playing an ever-expanding role in this regard. Through the principle of universal jurisdiction, some European courts in recent years have investigated and even prosecuted cases tied to a few types of international crimes, including war crimes, crimes against humanity, torture, genocide, attacks on UN personnel, and enforced disappearances. Universal jurisdiction is based on the belief that given the gravity of the abovementioned crimes, they can be investigated and prosecuted even if committed abroad, by foreigners or against foreigners. While Germany, France, and Sweden have been the main countries to use universal jurisdiction laws to investigate allegations of war crimes, crimes against humanity, and genocide, according to Human Rights Watch, several other countries — including the Netherlands, Belgium, Denmark, Norway, the UK, and Switzerland — have created specialized war crimes units with dedicated police and prosecutors.

As of February 2019, the Center for Justice and Accountability had identified 34 ongoing or concluded investigations, complaints, and cases in European courts. That number has only increased since, due to a clear political will for accountability on the part of some European countries. For example, Sweden issued electronic pamphlets asking anyone who has been a victim of a war crime, knows a victim, or knows a perpetrator to contact the police. Syrian lawyers, activists, organizations, and family associations — often in partnership with international rights groups — have played a central role in this effort by identifying both victims and perpetrators, building legal dossiers, and relentlessly advocating for justice and accountability.

Multiple complaints have been lodged and investigations have taken place in Europe against senior officials in the regime of President Bashar al-Assad based on both identified and unidentified perpetrators (e.g. through structural investigations where there is evidence of a crime without definitive perpetrators, focusing rather on the structures related to a potential crime or groupings of potential perpetrators). While Assad, as head of state, has immunity from prosecution before national courts of a third country so long as he remains in office, other senior officials are not afforded the same protection.

Only last month, the European Center for Constitutional and Human Rights (ECCHR), the Syrian Women’s Network, and Urnammu filed a complementary complaint against Hassan detailing sexual and gender-based crimes as crimes against humanity, and asking that German authorities prioritize the investigation and prosecution of these crimes in their work on Syria.

While Hassan and the others that are subject to international arrest warrants are based outside of Europe, in early 2019 Germany asked Lebanon to extradite Hassan — who was undergoing medical treatment in Lebanon — to Germany. The move was a promising sign that the arrest warrant was not merely a symbolic act but an actual step toward accountability.

Cases against former regime agents based in Europe

The trial of Anwar Raslan and Eyad al-Gharib — dubbed the torture trial — has made headlines worldwide. As a former officer in the Syrian General Intelligence Directorate, Raslan is the most senior former Syrian government official to be put on trial in Europe for serious crimes in Syria. Both Raslan and al-Gharib were arrested in Germany in February 2019 as part of a joint German and French investigation pursuant to a series of complaints filed by the ECCHR, Syrian lawyers including Anwar al-Bunni (Syrian Center for Legal Studies and Research), Mazen Darwish (Syrian Center for Media and Freedom of Speech), and Ibrahim al-Kasem (Caesar Files Group), activists, and torture survivors and their relatives. The ongoing trial started in April 2020 and is taking place in Koblenz, Germany. A podcast titled Branch 251 is detailing both the case and the trial.

Yet this case is not the first. In 2017, Sweden prosecuted and sentenced a low-level regime soldier, Mohammad Abdullah, to eight months in a Swedish prison for violating human dignity by posing with his boot on a corpse. Like Raslan and al-Gharib, Abdullah left Syria for Europe in 2014 only to be prosecuted for his crimes in Syria.

In addition, just a few weeks ago, in late June, Germany arrested a Syrian doctor for alleged crimes against humanity. Alaa Moussa, who left Syria in mid-2015 for Germany, is accused of torturing detainees in a Syrian intelligence prison in Homs. While in Germany, he was recognized by other Syrians and reported to the authorities. The allegations against Moussa correspond with other documented cases of hospitals in Syria being used as instruments of repression.

Cases against rebel fighters in Europe

A number of European countries, including Germany, Sweden, and Austria, have prosecuted and convicted former rebel fighters of war crimes and violations of the Geneva Conventions. Sentences have varied from a few years to life in prison for at least three of the former rebels. Mouhannad Droubi, a former Free Syrian Army fighter who had obtained asylum in Sweden in 2013, was prosecuted under international law for assaulting another armed actor who was injured and bound. On appeal, the Swedish court convicted him of committing a war crime and sentenced him to eight years in prison and deportation as soon as he had served his sentence.

Both France and Italy have opened investigations into and at least one occasion even indicted national companies that are alleged to have been complicit in war crimes and crimes against humanity perpetrated by the Syrian regime and ISIS. Qosmos S.A. and Area S.p.A. have been investigated by France and Italy, respectively, for selling surveillance material to the Assad regime. A similar complaint was filed against German company Utimaco for supporting the centralized surveillance system run by Syrian Telecom and known to pass information to the Syrian regime. That information was subsequently used to track down, detain, torture, and even kill protesters. While Germany did not ultimately open an investigation against Utimaco, both France and Italy have ongoing judicial investigations against their respective corporations for complicity in acts of torture, violations of European embargoes, and breaches of foreign trade law.

In addition, French courts have indicted French cement company Lafarge on charges of complicity in crimes against humanity, financing of a terrorist enterprise, and endangering people’s lives for its financing of ISIS and other armed groups in Syria in 2011-14. While the case may take months or years before going to trial, Lafarge’s executives could face both prison time and severe fines if found guilty.

European cases against former ISIS and extremist fighters vary from a structural investigation into ISIS in Germany to criminal proceedings against both European and Syrian nationals charged with war crimes for their time with ISIS or other extremist groups. To date, France, Germany, Latvia, and the Netherlands have cases involving ISIS or other jihadists. Indeed, France only very recently held its first trial of a French ISIS fighter, Tyler Vilus, for crimes committed in Syria, who was alleged to have overseen foreign fighters who carried out the 2015 Paris terror attacks. On July 3, he was found guilty on all charges and sentenced to 30 years in prison.

European cases will undoubtedly increase in number and significance in the coming years as the prospects for a political solution and democratic transition in Syria are becoming increasingly remote. Nor is an international tribunal forthcoming, given the continued stalemate at the UN Security Council. As Syrians in Europe continue to organize (through groups like Families for Freedom, the Caesar Families Association, and The Syria Campaign among many others) and demand justice for themselves and their loved ones, Europe may be the only outlet for Syrian accountability in the foreseeable future.

Indeed, even long-time war criminals like Rifaat al-Assad (a.k.a. the butcher of Hama) have recently faced the weight of European justice (albeit for unrelated money laundering crimes). Meanwhile, Syrians found to have participated in activities supporting the Assad regime risk deportation from some European countries.

Yet as investigations and prosecutions increase, many Syrians are also looking at European courts for answers — most commonly regarding the fate of the over 100,000 detained, disappeared, and missing. Syrian groups have repeatedly demonstrated outside the courthouse in Koblenz, Germany with pictures of their missing, while others have been lobbying European prosecutors to question former ISIS fighters on the fate of the thousands disappeared by ISIS.

While the questions far exceed the answers, Syrians are regaining glimmers of hope for the first time in years. Europe’s clear and growing political will for accountability and justice may be its last bid to stand on the right side of history on Syria, having failed to stop the bloodshed and end one of the worst humanitarian and refugee crises of our time. The road to justice for Syria and many Syrians may very well go through Europe.

Reem Salahi is a non-resident scholar with the Middle East Institute’s Syria Program, a technical advisor to Adam Smith International’s Syria governance project, and an advisor to the International Commission on Missing Person’s Syria/MENA Program. The views expressed in this piece are her own.