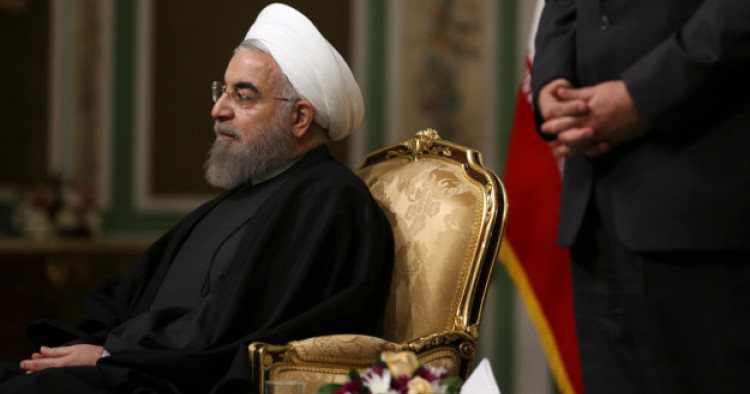 The Iranian president, Hassan Rouhani, faces an uphill struggle as he prepares for his reelection bid scheduled for May 2017. It was not supposed to be this way. Iran’s 2015 nuclear deal with world powers, including the United States, was supposed to seal Rouhani’s second term.

After all, the moderate cleric had delivered on his key promise, the lifting of the painful nuclear-related international sanctions. But Rouhani’s hardline opponents inside the Islamic Republic are now increasingly identifying corruption as Rouhani’s Achilles Heel.

The same hardliners, however, should not forget that corruption is hardly a trend that only impacts the Rouhani circle. In fact, Iran’s Supreme Leader, Ayatollah Ali Khamenei, has good reasons to fear that the issue of corruption is one of the principal vulnerabilities of the entire regime and moderates and hardliners alike.

Mohammad Nobakht, one of Rouhani’s key advisors, said last week that the government is administrating the state budget with only “USD23 billions in oil income.” This was to suggest that scope for corruption is limited and to draw a sharp contrast with the sort of unprecedented oil revenue that was enjoyed by the previous hardline administration of Mahmoud Ahmadinejad. And yet, as the first Rouhani terms nears its end, it is a public relations struggle to keep simply pointing to the Ahmadinejad era as the source of all corruption.

Nor can the Rouhani team blame all cases of corruption leveled against a number of officials as politically motivated. A glance at some of the latest scandals, including cases of excessive salaries for certain government officials, shows that graft and financial nepotism is not limited to one regime faction or another.

Meanwhile, the president’s political rivals are not holding back. Across hardline media, a campaign is underway to paint Rouhani and his inner circle as the “new elite.” Often referring to it as the “wealthiest government in Iran’s history,” the top members of the moderate government are painted as aloof. That they are more concerned about purchasing aircraft from Airbus and Boeing than creating jobs for the army of Iranian unemployed youth.

In the same spirit, some of the loudest critics of Rouhani are busy politicizing and publicizing the issue of corruption to the extent possible. Timing coincides with Rouhani preparing to face the Iranian voters as his re-election test nears.

One such critic, a former member of the Majlis (Iran’s parliament) has launched a campaign to link the imprisoned Babak Zanjani - a millionaire that has been prisoned for embezzlement - to Rouhani. Rasaee has specifically been targeting Hossein Fereydoun, Rouhani’s brother, as a central player in the corruption ring in the government.

The hardline camp, meanwhile, is hardly immune. That includes some of Khamenei’s closest lieutenants. Take the case of Sadeq Larijani, the head of the powerful judiciary and someone who is a direct appointment by Khamenei himself. Larijani has in recent days been under a torrent of criticism for his ““63 personal bank accounts.” He is said to have systematically profited from his governmental position.

Based on some Iranian reports, Larijani’s case has angered Khamenei so much that he is refusing to see Larijani and has repeatedly denied requests for meetings. Khamenei’s anger is totally justified. Corruption on this scale undermines the regime like very few other issues can do.

What is more is that it was Ali Tayyebnia, Rouhani’s minister of economy, who revealed the case about Sadeq Larijani’s bank accounts. In other words, we have the most senior figures inside the Islamic Republic attacking each other with different charges but also explosive corruption charges. The damage to the regime as a whole could be significant. This is why Khamenei is angry and anxious about what all this will do to the public mood and mobilization against Iran’s political system.