Is Russia drawing down its presence in Syria? 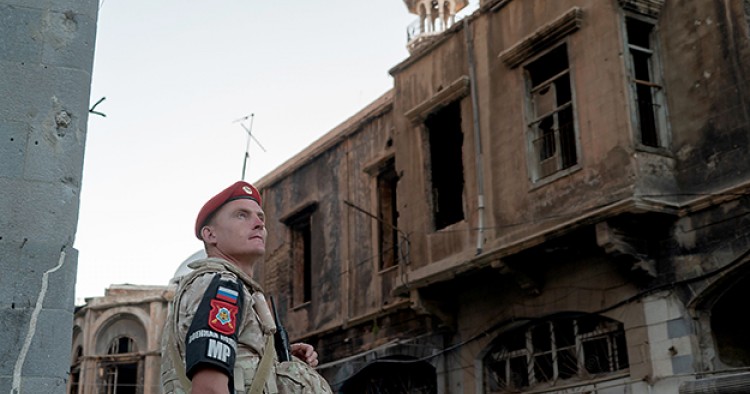 Following the Syrian government’s full reconquest of the country’s south, there are real signs that Russia intends to reduce its presence and responsibilities in Syria. Moscow has not stated this openly, in contrast to its three previous drawdown announcements. Each of these announcements came after a major victory, such as the recapture of Aleppo from rebels or eastern Syria from ISIS, and did not result in any tangible reductions. Despite an absence of fanfare, however, recent developments and statements indicate that a partial drawdown is already underway.

A substantive force reduction may have already occurred among Russia’s military police. Drawn primarily from the Sunni Muslim regions of the North Caucasus, there have been four battalions of military police present in Syria since the first Chechen battalion was deployed to Aleppo in December 2015. These have generally rotated home after tours lasting three to six months, although the specifics are not fully known. One of the battalions, from Dagestan, was allegedly permanently returned in December 2017: they may have been replaced, but this is unclear. In the past 10 weeks, however, four different units have returned home. A Chechen battalion returned to Grozny on May 30, while another Dagestani battalion arrived back at its home base in late July. Two other, more curious, returns also occurred, with two unusually small units returning to Mozdok air base in North Ossetia: 150 military police on Jun. 30, follow by 100 more on Jul. 17. While the present size of the Russian military police contingent in Syria remains unclear, the unusually high rate of unit withdrawals recently suggests their number has almost certainly fallen substantially.

At the same time, Russia has definitively informed Israel that it will not uphold the security guarantees related to Iran and Hezbollah that the Jewish state has sought for the past year. While Moscow had made little effort to practically restrict the growing activity of Iran and its proxies as they developed the infrastructure and capabilities to target Israel from Syria, the Kremlin had outwardly entertained hopes that they would restrain their erstwhile allies. Russia had publicly stated that “all foreign forces” should leave Syria, despite pushback from Iran. This changed on Jul. 30, when Russian officials informed Israel for the first time that they could not force Iran to withdraw its forces from Syria. The timing of this statement was telling, coming just as Syrian regime forces recaptured the entirety of the Golan Heights border area. Russian officials have since clarified this announcement somewhat, with Foreign Minister Sergey Lavrov claiming that Iran had agreed to keep its units at least 52 miles from Israeli-controlled territory. However, the reality is that Moscow has few options available to control its allies in the area. Moreover, its remarks to Israel indicate that it does not see itself as responsible for preventing clashes between the two.

Perhaps the most telling recent development has been the clarification of Russia’s position on Idlib province. In a lengthy interview on Aug. 1, Alexander Lavrentiev, Russia’s special presidential envoy for Syria, described Moscow’s priorities in Syria, focusing on the political track of the Sochi and Astana negotiations. When asked about the situation in Idlib, Lavrentiev stated that it was “impossible to leave it as it is,” citing the presence of members of Salafi rebel umbrella group Hayat Tahrir al-Sham in the area. However, he also pointedly stated that Russia “will not seek to destroy everything by frontal attacks,” rebuffing a suggestion that Moscow would aid Bashar Assad’s government in militarily reconquering the entirety of the province. Lavrentiev noted instead that the “moderate opposition,” presumably those elements supported by Turkey, must “defeat these radical elements,” a task in which they would be “supported by Russia in any way possible.” He thus appeared to confirm that Russia would respect the ring of Turkish military bases along the front lines of rebel-held territory in Idlib and Aleppo, and would not commit fully to a regime offensive against the area.

Finally, other important Russian resources also appear to be increasingly turning their attention elsewhere. The Wagner Group, a private military company and key Russian asset that has consistently deployed roughly 2,500 of the 10,000 forces that comprise Russia’s entire force disposition in Syria, is one such element. As early as March, the group was reportedly preparing half its personnel to deploy to Africa, where they are now active in Sudan, the Central African Republic, and possibly elsewhere. Three Russian journalists were recently killed while filming the group’s activities in CAR, while 500 Wagner fighters were reported on the Sudan-CAR border. At least parts of these forces were almost certainly drawn from Wagner’s personnel in Syria, reducing its presence there.

While Moscow may be ready for the Syrian conflict to wind down, Tehran and Damascus are not. Both are preparing for a major operation in the northwest, with large amounts of reinforcements heading to the area lately. Russia appears to have greenlighted a limited offensive in northeastern Latakia province, but it is very unlikely that Syrian government forces will stop there. In this, the Kremlin’s premature withdrawal of military police may prove detrimental, in that Moscow will have that many fewer assets with which to influence its allies on the ground. Russia will likely soon find that its will alone is not sufficient to end the Syrian conflict.