Russia, Iran, and the Syria Test 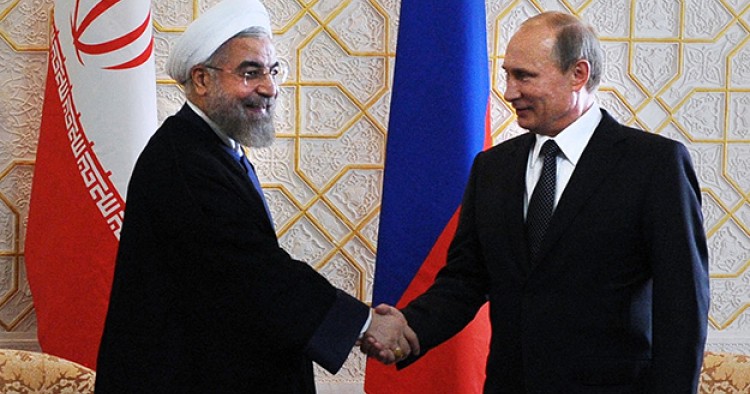 Russian President Vladimir Putin made waves leading into the UN General Assembly with new military deployments to Syria and an accord with Iran and the Iraqi government, signaling the formation of something like an alternate coalition combating ISIS. The sudden moves serve as a wakeup call not only for the United States and its allies, but also for Iran. The Russian actions are not enough to lead the Iranians to openly second-guess their support for Syria’s President Bashar al-Assad, but they are bound to raise tough questions among officials in Tehran.

Putin is today an ally of sorts of Tehran, but centuries of rivalry and Persian humiliation at the hands of the Russians are not easily forgotten, and should in fact be taken into account by Tehran. And current developments are not just about Russia carving out more clout for itself in the Levant, a region Moscow mostly abandoned with the fall of the Soviet Union, but a question of whether it is in Tehran’s long-term interests to see the Russian grip on the Middle East tighten. As much as the addition of Russia to the Iran-Assad-Hezbollah axis brings short-term benefits, the inadvertent costs for Tehran cannot be ignored.

There are lessons, and perhaps opportunities, for American policymakers in this Iranian quandary. In Washington, Iran’s stance on the Syrian war is seen as intractably pro-Assad due to Tehran’s ideological fortitude and regional hegemonic ambitions. But the sentiment among Iran’s elites is not as monolithic as it may appear.

The hard-liners, to be sure, remain purists in their anti-Americanism. In what they see as an epic zero-sum game, they are willing to tolerate a stronger Russian foothold in the Middle East as long as it costs the United States and its allies, the Saudis and the Turks. They are interested in quick wins and will worry about the implications later.

However, this is not necessarily the prevailing view among the moderates in Tehran around President Hassan Rouhani, despite the Iranian president sounding categorical in his defense of Assad at the UN General Assembly on September 28. While the moderate Iranian voices on Syria have been drowned out over the last four years, Russia’s military buildup might push them to speak up again. There are some heavy hitters among their ranks, and they have a strong case to argue.

Take Mohammad Sadr, a leading Iranian diplomat and today a top advisor to Foreign Minister Javad Zarif. In 2013 Sadr spoke against unconditional support for the Assad regime and warned about the damage it could do to Iran’s regional standing. He famously recalled how he had witnessed the Syrian security force’s brutality while serving as deputy foreign minister in the 1990s. Sadr is no peripheral figure in Tehran. Although his claim that “Assad is no different than Saddam” irked hard-liners, his political heft and family ties, including a relation to Ayatollah Khomeini, was enough to insulate him. He embodies the underlying reservations in the Rouhani camp about Tehran’s most controversial foreign policy pursuits. Russia’s blatant power grab has given this camp new space to raise hard questions.

For over four years, the hawks in Tehran have peddled the notion that keeping Assad alive is critical to keeping the Iran-Syria-Hezbollah axis intact. In doing so, they have managed to unwittingly transform themselves from the “Islamic Resistance” camp to the “Shi‘i anti-Sunni” camp. Thus Iran’s pan-Islamic credentials have taken a major tumble. Now the Islamic Resistance axis needs a rescuing hand from Russia, a Christian-majority Eurasian state.

Framing Iran’s contentious Syria intervention as an “Islamic cause” is therefore hollower than ever before. Once this reality is more widely acknowledged in Tehran, the Iranians can more honestly weigh the geopolitical costs and benefits of a more assertive Russia in the Middle East.

The hawks, including senior commanders of Iran’s Revolutionary Guards, will likely still argue that Tehran’s military intervention, even when it goes hand in hand with the Russians, is worth it as it gives Tehran “strategic depth” in the Levant. But moderates such as Mohammad Sadr and the silent majority in the presidential office and the Foreign Ministry may soon ask at what cost.

Never mind that Iran’s Syria policy has already devastated Tehran’s image in the Arab Sunni world, formerly a key constituency. In specific areas, Moscow is an explicit rival. A Russia, for example, that becomes more influential in Syria will have no incentive to see Iran—an energy exporter rival—pump Iranian gas to Europe via Iraq and Syria to the Mediterranean, as was Tehran’s plan.

History is also instructive. Russia voted repeatedly at the UN Security Council to sanction Tehran due to its nuclear program though it was the principal contractor to finish Iran’s first nuclear plant at Bushehr, and it reneged on its key military contracts with Iran by not supplying it with much-coveted S-300 anti-air missile systems. In addition, for 24 years Moscow has refused to reach a deal with Iran over the demarcation of the Caspian Sea, and since 2005 it has effectively blocked Tehran from becoming a member of the Shanghai Cooperation Organization, Eurasia’s top security grouping.

Nor should Iran be sure that Russia wants it as a co-equal in shaping the future of the Middle East. Unlike Tehran, Moscow has kept its hand fairly free in dealing with other regional players such as Turkey and Saudi Arabia over the question of Syria, and it can still go over Tehran’s head. Moscow’s decision to share intelligence with Iran in the fight against ISIS is conducive to Russia’s military expansion in the Middle East, but is not tantamount to an Iranian-Russian partnership. Those in Tehran less fixated with anti-Americanism and more vigilant about the potential costs of Iran doubling down in Syria and cozying up to Moscow should speak up, armed with a litany of past Russian wrongdoings against Iran and its interests.