For Russia, Libya and Idlib are now part of the same gamble 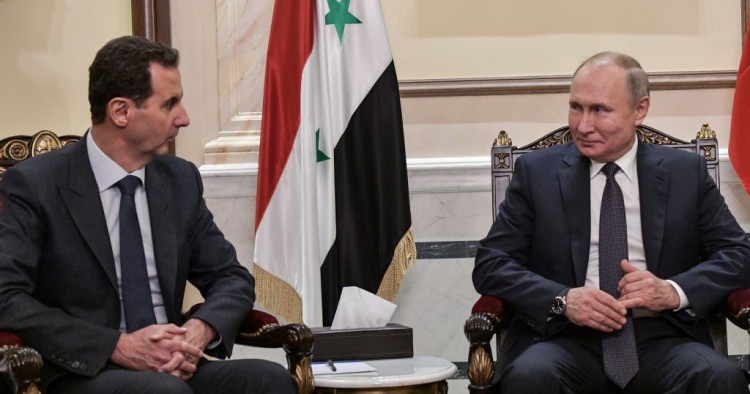 Although Moscow continues to reap the benefits of its Syrian campaign, it is increasingly faced with diminishing returns. Despite its greater geopolitical involvement in the country, the Kremlin has so far failed to extract major economic dividends and may soon face increased competition from Tehran. With Syria’s future clouded in uncertainty and the unresolved issue of the Idlib region hanging like the sword of Damocles over any potential political settlement, Russia is now trying to bring the Libyan conflict into the equation as well.

Russia’s interest in a settlement in Syria has waned over the past year. Although the military campaign has allowed Moscow to return to the Middle East and secure access to the corridors of power in major capitals across the region akin to what it enjoyed before Anwar Sadat’s expulsion of the Soviets from Egypt, its role in the Syrian conflict is challenged by growing Iranian influence and Turkey’s concerns about border security and refugees. Furthermore, Russia’s status as both an actor and an intermediary no longer delivers the same geopolitical returns or justifies its role as an indispensable power in the region. In light of the growing challenges, the Kremlin has decided to expand the scope of its Middle Eastern gambit by ramping up its involvement in the Libyan conflict.

Although Khalifa Hifter, commander of the self-styled Libyan National Army, recently left Moscow without signing on to a Russian-Turkish cease-fire deal, the Kremlin continues to work on a solution that could deliver geopolitical returns. As has been the case in Syria, deals between the Russian and Turkish leadership could see both sides benefit in Libya. Most recently, Moscow has supported talks in Berlin that produced an agreement on Sunday to respect the UN arms embargo, halt outside military support, and push the warring parties to reach a full cease-fire.

Ankara’s growing involvement in the Libyan theater — a recent and unexpected development — is motivated by a desire to boost its regional outreach, and potential settlements in Libya and Syria should now be perceived as two parts of the same greater and as yet unresolved geopolitical dynamic. Thus, during the recent negotiations between Russian President Vladimir Putin and Turkish President Recep Tayyip Erdoğan in Istanbul, the two leaders proposed a cease-fire in Libya and simultaneously agreed on a truce in the Idlib region as well. The agreement, which was meant to avert a possible military escalation in northwestern Syria and protect Russian-Turkish diplomatic relations, was violated just few days after being implemented, once again highlighting the threat of disruptions caused by Syrian President Bashar al-Assad’s persistent desire to launch an assault on the final remaining major opposition stronghold in the country.

Although Russia may now be focused on a possible breakthrough in North Africa, the deal could also slow down Assad’s forces in the Idlib de-escalation zone. With Russia trying to maintain its status as an honest broker in the region, the Syrian conflict has the potential to become hostage to Moscow’s growing geopolitical gamble. This could put a dent in the ambitions of Assad, who has vowed to “liberate every inch of Syria from foreign troops.” Putin’s recent unexpected visit to Damascus, which came immediately before he travelled to Istanbul, may well have been to personally inform Assad about the necessity of maintaining the cease-fire in Idlib and to avoid any miscommunications related to the deal with Erdoğan.

Although resolution of the Libyan crisis has emerged as a priority for the Kremlin, halting any changes around the Idlib de-escalation zone also serves Russia’s end goals in Syria and the region well. With the area hosting millions of potential refugees and thousands of radical Islamist fighters, and standing as one of the last bastions of resistance to Assad’s government, Moscow has effectively turned the uncertainties surrounding the province into its trump card in negotiations with Ankara. Thus, discussions and agreements on Idlib usually end up being incorporated into compromises pertaining to other parts of the country. Russia also understands that the issue of Syrian refugees is politically charged in Turkey and limiting their flow is critical for Erdoğan to maintain his domestic popularity, which is why Moscow actively uses it to extract concessions on critical matters in Syria, and could use it to gain leverage on Libya as well.

Moscow also uses Idlib to pressure the regime in Damascus, which has grown more resilient over the past four years. The Kremlin understands that the continuing independence of the province is one of the main reasons why Assad remains heavily dependent on Russia. Despite military advancements, the regime still lacks sufficient manpower to unilaterally launch a successful assault on the region, given the lack of support for such a move from the Iranians. The regime requires substantial help on the ground and, above all, in the air. In addition, were it to launch such an attack, it could galvanize Turkey’s proxies, essentially leaving Damascus in a head-to-head fight with Ankara. Thus, Moscow is interested in maintaining a low-intensity conflict and even, in the long term, a freezing of major shifts in the de-escalation zone.

One of Russia’s options in seeking to prevent major changes in Idlib is to help the regime regain some territory and then pressure it to refrain from making any other significant moves for the foreseeable future. Although it would be difficult to achieve, in the coming months Moscow could help Damascus to assert control over the M4 and M5 highways, which would enable Assad’s forces to establish clear demarcation lines between themselves and the opposition. Such a move would essentially echo Turkey’s Operation Olive Branch and Operation Euphrates Shield, which achieved limited gains after which Ankara abstained from further expansion given the regime’s tacit acceptance of its new protectorates.

Overall, Moscow’s position in Syria is gradually being challenged by shifting geopolitical dynamics and increasingly assertive behavior from an Assad regime that has grown more resilient. Although Russia is striving to maintain its status as a regional power and self-appointed role as an honest intermediary, its actions in Idlib and Libya could ultimately become the litmus test of its long-term ambitions in the Middle East and reveal its endgame in Syria, which up until now has remained unclear.

Kirill Semenov is an independent analyst with a long record of professional study of political and military issues in the Middle East, with a strong focus on the conflicts in Syria, Yemen, and Libya. He is also a non-resident expert with the Russian International Affairs Council. Dmitriy Frolovskiy is a political analyst and consultant. He is a contributor to the Carnegie Moscow Center, the European Union Institute for Security Studies, and many other outlets. He is currently a private consultant on policy and strategy in the Middle East, and has also written extensively about Russia’s foreign policy toward the GCC. The views expressed in this article are their own.