Russia looks to the Middle East to boost arms exports 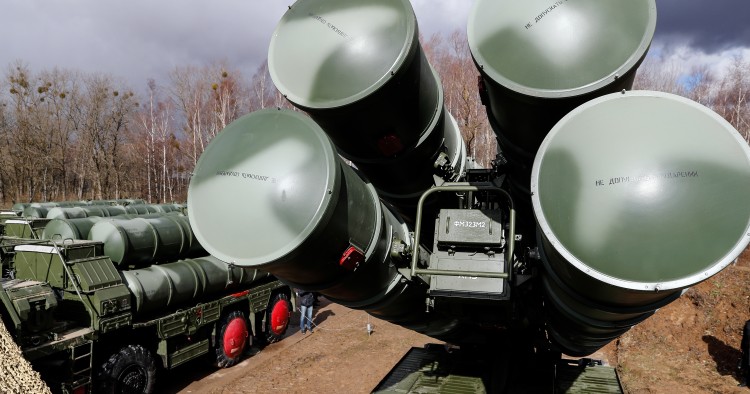 According to the Stockholm International Peace Research Institute’s (SIPRI) recently published annual report, Russia’s share of global arms exports shrank by around one-fifth over the last decade, falling from 27 percent to 21 percent, while the U.S. share increased from 30 percent to 36 percent, widening the gap between the two major arms exporters. As Russia looks to reverse this decline, it is focusing on the Middle East, the world’s second-largest and fastest-growing arms market, as a way to boost its exports.

While it is early days, the effort seems to be paying off so far. According to Russian media reports, Russia and Egypt recently signed a new arms deal worth at least $2 billion. This deal, which involves the purchase of over 20 4++ generation Sukhoi Su-35 fighter jets (Flanker-E), makes Egypt a major importer of Russian arms and comes on top of previous deals between the two countries for tens of MiG-29 jets, Ka-52K helicopters, and coastal defense units. In addition to the deal with Egypt, Russia is also moving ahead with the sale of the S-400 anti-aircraft system to Turkey in yet another confirmation of Moscow’s growing focus on the Middle East.

Whether this shift will be enough to compensate for the broader decline in Russia’s global market share, however, is another question entirely. For their part, Russian officials have pushed back against this narrative, refuting SIPRI’s analysis. They argue that in recent years the volume of Russian arms exports has actually increased and its portfolio of orders reached a record $51 billion in 2018. That said, it is important to note that SIPRI aims to define trends in global arms transfers and calculates volumes based on the military value of the equipment rather than its market price. As a result, even if Moscow did reach a record in 2018, the broader trend of a declining Russian share of the global arms market is still quite clear.

A downward trend: Exports in decline

What’s driving this trend? Global political and economic developments — and their negative impact on Russia’s ability to secure new arms deals — may be a partial explanation. The confrontation between Russia and the West, which was exacerbated by the Ukraine crisis in 2014 and Moscow’s subsequent campaign in Syria, plays an important role in this regard.

Sanctions imposed by the U.S. and its European allies may eventually hamper Russia’s ability to sign new arms contracts, and for now the U.S. seems set on using them to ramp up pressure on Russia. In August 2017 U.S. President Donald Trump signed the Countering America's Adversaries Through Sanctions Act (CAATSA), which aims to punish Moscow for its malign actions. Under the legislation, countries trading with Russia’s defense and intelligence sectors can face secondary sanctions. Rostec, a state corporation that brings together all the major producers of defense and high-tech products, is on the CAATSA list, which means U.S. policy changes can have a significant impact on its exports, especially to countries that have military-technical agreements with Russia. In this context, the Kremlin faces more uncertainty and risks in the arms exporting business.

Washington has already imposed secondary sanctions on Beijing over its purchase of Russian Su-35 fighter jets and S-400 systems. This established a precedent and sent a clear signal to Russian partners that the U.S. might impose sanctions on them as well. In fact, it puts many countries at risk, including long-time partners of Moscow, like India, Egypt, and Algeria, as well as those with which it has recently begun to develop military-technical ties, such as Turkey, Vietnam, Pakistan, Qatar, Indonesia, Kuwait, Saudi Arabia, and the UAE.

As a result, changes in U.S. economic and political relations with Saudi Arabia, Egypt, Turkey, or the UAE, for example, can end up having a major impact on Russia’s export capabilities. For example, it was unclear whether Russia and India would manage to sign a contract on S-400 deliveries because of U.S. pressure. In the end, the two partners were able to find a solution and inked a $5.4 billion deal, but only after India received a presidential waiver from the U.S.

And just because India was able to find a solution, that doesn’t mean there won’t be issues with other contracts and clients. For now Russia’s biggest deals are with Egypt (helicopters, fighter jets, coastal defense systems, and more), Indonesia (Su-35 jets), Iraq (T-90s tanks), and Vietnam (T-90s tanks). The Gulf Cooperation Council states are also interested in Russian weapons, and Russia is expected to begin delivering the S-400 system to Turkey, a NATO member, later this year.

Although the Russia-Turkey contract for the S-400 missile system has been presented by both sides as a done deal, it still seems uncertain. So far, Ankara hasn’t listened to U.S. requests to drop the deal, and Washington has recently moved to take more aggressive action, suspending Turkey’s participation in the F-35 program. It is unclear what additional steps the U.S. is prepared to take vis-à-vis its ally, but in the end the fate of the Moscow-Ankara deal will determine what happens with other potential partners in the Middle East, like Saudi Arabia, the UAE, and Qatar, as well as elsewhere.

The same applies to the new Russia-Egypt contract for Su-35 fighters. Egypt is among most important U.S. partners in the region and its continuous interest in Russian arms annoys Washington. However, it seems unlikely that the U.S. will sanction Egypt given the weak state of its economy; such a move would also present political issues and would undermine the position of Egyptian President Abdel-Fattah el-Sissi.

That said, the U.S. has the capacity to effectively influence its partners’ behavior and to limit Moscow’s opportunities to expand its share of the arms market in the most attractive regions: The Middle East and Asia. However, if the U.S. continues exerting pressure on its partners over Russia, it runs the risk of provoking increasing opposition. Moreover, it is unclear what mechanisms Washington is going to use to implement secondary sanctions or what incentives it could offer its partners to stop cooperating with Russia. Otherwise, the U.S. will need to act against its partners, which might end up having the opposite effect, prompting them to seek closer ties with Moscow as a counter-balance to excessive U.S. pressure.

Although Asia and Oceania remain the world’s largest arms market, accounting for 40% of total imports, countries in the region have started to import less. By contrast, across the Middle East, the demand for arms is only expected to grow, driven by ongoing conflicts (such as those in Syria, Yemen, and Libya), the fragile security situation, and the threat of military confrontation between state and non-state actors. According to SIPRI, over the last decade the region’s arms imports grew by 75% from 20% of the global total in 2009-13 to 35% in 2014-18.

Russia is not alone in looking to the Middle East as a source of growth, however. Indeed, as the most attractive and lucrative arms market, the Middle East attracts all the major arms exporters and the competition is fierce. At present, Middle Eastern countries import only 10% of their arms from Russia, while 54% comes from the U.S. and 9% from France. Therefore, Russia’s presence in the market is quite limited, although it is growing thanks to the Kremlin’s outreach to regional arms importers. In last year’s SIPRI report Russia was not even in top three arms exporters to the region.

As it looks to ramp up its exports, Moscow is highly dependent on the broader political and economic situation in the Middle East. Given the fact that the majority of the regional actors — Saudi Arabia, Egypt, UAE, Qatar, Turkey, Jordan, and Kuwait — are U.S. allies and importers of American arms, Russia finds itself in a very tricky situation.

European exporters are also ramping up their regional presence. In recent years, the leaders of the European arms industry — France, Germany, the UK, and Italy — increased their share of the global arms market by boosting their exports to the Middle East. France is the major Russian competitor in Egypt, which imports 37% of its arms from France against 30% from Russia. In this sense, Egypt plays both sides, trying to diversify its suppliers: In 2015 Cairo signed a deal with Moscow for 50 Russian MiG-29 fighters as well as with Paris for 24 Rafale jets.

Algeria, a long-time major customer, imported 66% of its arms from Russia in 2014-18, although imports from Germany account for 10% of its total as well. The current political turmoil in Algeria might well result in a change in Russia’s market share and a shift in favor of European producers. The UAE, Qatar, Saudi Arabia, and Turkey — where Russia is currently seeking new contracts — also import a significant share of their arms from the U.S. and European suppliers.

Therefore, Russia’s position in the regional and global arms market is getting more complicated and difficult given Moscow’s declining share of total exports, decreasing imports in Asia and Oceania, and rising competition in the Middle East. In addition, growing U.S. pressure on Russia via its secondary sanctions puts Moscow in a very challenging situation that will make it harder to sign big new contracts and increase its arms exports.

Despite all of these difficulties Moscow is working hard to get new deals, both in the Middle East — the world’s fastest-growing and the most attractive arms market — and elsewhere, as part of a broader effort to maintain its status as a leading arms supplier. However, given the geopolitical headwinds and intense competition, maintaining that status looks like it will be an increasing challenge in the years ahead.

Alexey Khlebnikov is an expert on the Middle East at the Russian International Affairs Council. The views expressed in this article are his own.