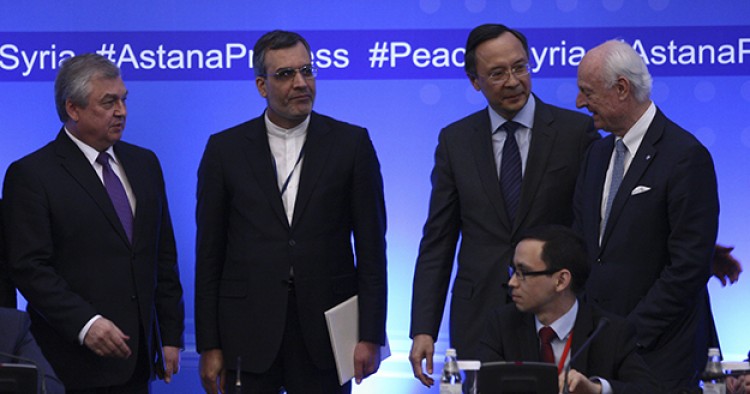 Last week’s round of Astana talks was particularly important with the Syrian government, the opposition, and various regional patrons agreeing to Russia’s de-escalation plan of the conflict.

The initiative is a significant achievement, given that it comes after the chemical attack on Khan Sheikhoun and the U.S. strike in response, which heightened tensions between Washington and Moscow.

This round of Astana talks was a result of intense diplomatic activity. In less than a month, U.S. Secretary of State Rex Tillerson, Turkish President Recep Tayyip Erdogan, as well as the foreign ministers of Iran, Syria, Qatar, Saudi Arabia, Jordan, and the crown prince all visited Moscow. Tillerson and Russian foreign minister, Sergey Lavrov, are set to meet again this week in Washington for a follow-up after Astana.

Russia no doubt expressed its deep concerns over the U.S. strike during Tillerson’s April 11, and most certainly tried to convince Tillerson that such actions undermine the political process in Syria, in particular the Astana talks. The Astana process is crucially important for Russia as it gives it an option for a smooth withdrawal from the Syrian war through a political process.

The success of the Astana talks will define the outcome for the Syrian war, and Russia’s image in general. Through the Astana process, Russia managed to bring together the two main regional actors involved in the conflict on the ground—Iran and Turkey. It has also managed to change dynamics on the ground, which has decreased the intensity of fighting in certain areas. If; however, the Astana platform fails to produce tangible results, Moscow risks to lose its credibility, which will make all future Russian initiatives more doubtful for the other stakeholders.

In order to solidify the Astana process, Russia needs to expand it by inviting new participants. It is likely that Moscow made exactly this proposal during Tillerson’s visit. Russia could well have invited the United States to join Astana, and become a guarantor-state should a solution be found. Interestingly, the level of U.S. engagement in the Astana process has elevated since Tillerson’s visit to Moscow. Until this round, Washington was represented by its ambassador to Kazakhstan, George Krol. This time, Washington decided to send a more senior official—Acting Assistant Secretary of State for Near Eastern Affairs Stuart Jones.

U.S. support for Astana could encourage Saudi Arabia and Qatar to also join the Astana process, and eventually create a group where the interests of all participants are more or less balanced. Moreover, it could help the Trump administration restore U.S. influence on the Syrian political track.

Bringing Saudi and Qatar into the Fold

Active diplomacy from both Russia and Kazakhstan has also provided momentum to the Astana process. Speaker of Russia’s Federal Council (upper chamber of parliament), Valentina Matvienko, visited Saudi Arabia on April 15-17. She held talks with Saudi King Salman and foreign minister, Adel Jubeir. The visit was likely aimed at ensuring the Syrian opposition’s participation in Astana, among other matters.

Kazakhstan talks also played a similarly important role. Kazakh foreign minister, Kayrat Abdrahmanov, who is in charge of organizing the negotiations, went to Qatar and Saudi Arabia on April 23 and 24. During his trip, Abdrahmanov articulated an idea to extend the Astana format by including the two G.C.C. countries. He also informed his counterparts that Russia, Iran, and Turkey are currently discussing this possibility, and that it has the support of the Syrian government.

Additionally, Erdogan’s visit to Russia on May 3 was also telling. The Turkish president arrived in Sochi the same day another round of Astana talks started. This is an important signal as it demonstrates Ankara’s support for the process, which no doubt played a major role in ensuring Syrian opposition presence at the talks

Russia's de-escalation plan was the central topic in Astana as well as in Sochi between President Vladimir Putin and his Turkish counterpart. In short, The Russian deal proposes to create four de-escalation zones in the northern part of Homs, Idlib, East Ghouta, and southern Syria. Borders of these areas are to be encircled by safety zones, which would host centers for monitoring the cease-fire. The centers are to be staffed with military units from guarantor-states to provide security, although the Syrian government is currently pushing back against that idea.

During the press conference after the Putin-Erdogan meeting, the Russian president stated that the idea of de-escalation or safety zones in Syria has been on the table for a while. Putin was most likely referring to U.S. and Turkish plans to establish buffer zones in Syria, which Russia has opposed from the beginning. Now, Moscow is showing a will to compromise by offering its new Syria plan, or at least pre-empt any move by Washington to create their own buffer zones.

The deal has the backing of Russia, Iran, Turkey, and the Syrian government, creating a consensus from which further common ground and a meaningful political process can be developed. This initiative is indeed Moscow’s attempt to converge different approaches and plans in order to create a common platform for cooperation on Syria.

Putin added that he had discussed the de-escalation initiative with President Donald Trump who, according to Putin, in general supports such an approach. These de-escalation zones might just be a euphemism that allows Turkey, Iran, and the United States to consolidate their zones of influence in Syria.

Russia is seeking a compromise and wants to explore every opportunity that can enforce a political process, on the basic condition that a country-wide cease-fire be guaranteed by all external actors. For now, there doesn’t appear to be a real alternative for Moscow’s new de-escalation plan, at least from Russia’s point of view.