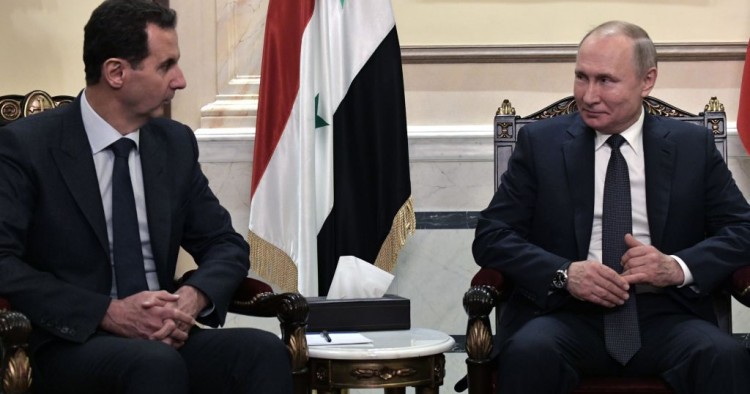 In recent weeks, a flurry of commentary from prominent voices and publications in Russia has seen a wave of criticism directed at Syria’s Assad regime. From RIA FAN to Pravda, Kommersant and the Valdai Club, accusations have been leveled against the regime of corruption, warlordism, and incompetence, as well as an obsession with achieving unrealistic military objectives at the expense of dwindling resources, reconstruction, and political and economic reforms. Public polling undertaken in regime-held areas of Syria by an organization linked to Yevgeny Prigozhin — a close friend of President Vladimir Putin and the owner of the infamous paramilitary outfit the Wagner Group — found Bashar al-Assad had only a 31 percent approval rating. 71 percent of respondents saw corruption as a serious issue, 60 percent blamed unacceptable living costs, and 54 percent of people polled said they would not vote for Assad in elections scheduled for 2021.

The sudden emergence of such a stream of accurate and honest public writing on Syria from Russia was in and of itself a surprise, but so too was the abrupt deletion of many of the pieces just days later. This was not the work of hackers as some subsequently claimed, but was it a coordinated campaign aimed at sending a pointed message from the Kremlin into the heart of Damascus? Or was this simply reflective of Russia finally waking up to the creeping quagmire it has gotten itself into?

The reality probably lies somewhere between those two scenarios. After all, the Kremlin has pursued other paths to humiliate Assad before, like during Putin’s visit to Hemeimeem Airbase in December 2017 when Assad was physically held back and prevented from walking alongside the Russian president and in trips to Moscow when Syrian flags were palpably missing from joint photo appearances between Assad and Putin. Since Russia’s military intervention in September 2015 — something that undoubtedly saved the regime from implosion — the Assad regime has remained a troublesome and uncooperative partner for Moscow, which takes and takes and gives little, if anything, back. Notwithstanding its status as the 21st century’s most infamous war criminal regime, nobody could blame Russia for being frustrated at its Syrian partner’s refusal to play along and for coming to terms with the mess it now owns in Syria.

In the last six months, Syria’s economy has spiraled into crisis, fueled by the financial collapse next door in Lebanon, but exacerbated by the regime’s deepening corruption, mismanagement, and insistence on prioritizing expensive military campaigns. Inflation has surged and a crippling wheat crisis is challenging ordinary Syrians’ ability to purchase the nation’s key staple, bread. State subsidies on other basic items are being removed and the small business sector is dwindling. The arrival of COVID-19 into regime areas and the prospect of the Caesar Act coming into force in America in June all look set to have a dramatic effect in the coming weeks and months. Meanwhile, Syria’s oil and gas sectors are struggling, in part due to disruption caused by ISIS attacks in the central desert, but also due to the siphoning of hydrocarbons from state pipelines by warlords and elite businessmen to sell on the black market in Lebanon. High-profile reconstruction projects are all but dead in the water, relegated to occasional public relations campaigns but little meaningful construction.

Militarily, the Assad regime continues to prioritize its campaign against opposition territories in Idlib while discounting the importance of stabilizing its own territory, countering a resurgent ISIS, or even investing money in non-military directions. The regime’s long-time struggle with a severe shortage of manpower was ameliorated for a time by the “militiafication” of the Syrian armed forces, but the decision to degrade the Syrian Arab Army (SAA) weakened the core source of Russian influence in Syria. Since 2015, the recentralization and restructuring of the SAA has been a central component of Russia’s intervention in Syria but it continues to struggle with the challenges posed by a regime business elite determined to keep hold of their associated militias and keep them at least partially independent.

Corruption is emerging as an especially sensitive issue for Russia in Syria, given its deleterious impact on the regime’s ability to operate efficiently, transparently, and in a manner more likely to attract foreign investment. Having secured the regime’s survival and methodically weakened its most committed geopolitical adversaries, Russia’s attention has been squared fixed on “bringing Syria in from the cold.” The financial requirements for meaningful reconstruction — estimated to be at least $300 billion — are far beyond the capacity of the Syrian, Russian, and Iranian economies, so foreign direct investment is desperately needed. But beyond the prospect of American secondary sanctions facilitated by the Caesar Act, the regime economy literally runs on corruption and could not be less attractive to outside investors. The increasingly public and bitter infighting between the regime’s crony elite, as illustrated by Rami Makhlouf’s unprecedented April 30 Facebook video and a string of tit-for-tat protests and editorials fueled by his business rival Samer Foz, all illustrate a fragile, divided, and corrupt system virtually guaranteed to lose an investor their money.

Diplomatically, Russia’s largely successful attempts to impede the so-called Geneva process and to empower new, alternative mechanisms like Astana and the Constitutional Committee have sheltered the regime from the prospect of a serious international attempt to force political change in Damascus. The UN’s position in Syria has been effectively neutralized, forced now to manage the Constitutional Committee whose capacity to change anything is virtually meaningless. It does, however, enjoy a cover of genuine international legitimacy, so the regime’s refusal to seriously engage with it and repeated acts of spoiling have infuriated Russian policymakers. With Western fatigue with Syria now an inescapable reality, a genuine and constructive regime engagement with something like the Constitutional Committee could have provided a political opening for Russia’s diplomatic strategy. But compromise, of any minimal measure, goes against the very grain of the Assad regime.

Russia’s approach to the crisis in Syria has been unquestionably brutal and unforgiving. Russia has been responsible for and complicit in countless war crimes in Syria since its intervention in 2015 but despite that, it still does now seek to re-acquire a seat for Assad’s Syria on the international stage. However, the regime’s apparent indifference to regaining international legitimacy and its crippling internal failures and mistakes will continue to prevent Russia from achieving its ultimate goal.

When Russia signals its dissatisfaction so publicly, as it appears to have done in recent weeks, we are presented with a small window opportunity for pointed diplomacy. Make no mistake though: The likelihood of Russia abandoning Assad in favor of a compromise president is next to zero, but its willingness to negotiate on other second-level issues is a possibility, should we appear serious on the other side. Should we let such opportunities pass us by, the status quo remains a situation that Russia can both afford and manage, despite its chaotic and often unpredictable nature.