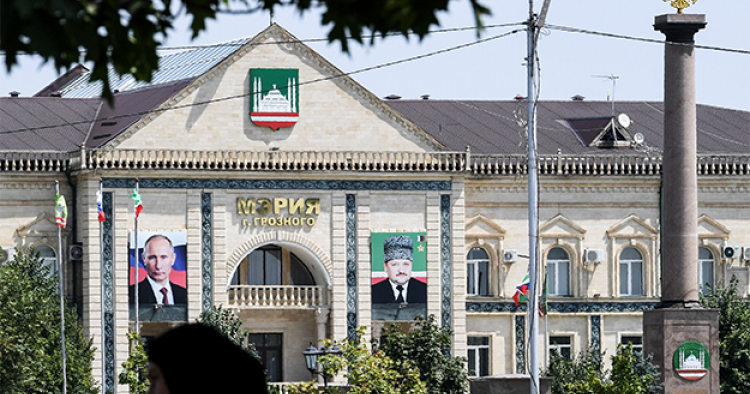 Russia’s military intervention and political maneuvering in Syria has garnered a large amount of media coverage. However, Moscow is also conducting a concerted outreach campaign to Syrian citizens and society through a unique resource: its Sunni Muslim North Caucasian regions. In particular, Head of the Chechen Republic Ramzan Kadyrov and Grand Mufti of Chechnya Salah-haji Mezhiev have emerged as a key conduit of Russian soft power with regard to Syrian civilian and Islamic figures. Russia’s North Caucasus-led efforts to engage with Syrian society expanded throughout 2017, but have vastly increased recently, hinting at further growth to come.

Moscow’s efforts to increase its standing in the eyes of Syria’s Muslim community began in mid-2016. That June, the Akhmat Kadyrov Foundation (a Chechen state-linked charitable organization named after Ramzan Kadyrov’s father) announced it would distribute 120 tons of food throughout Syria. This campaign was timed to coincide with the holy month of Ramadan, with Chechen authorities providing food for the fast-breaking evening meal. Around the same time, a broader Moscow-centric campaign was organized through the Kremlin-linked Zakyat charity, which in May 2016 ramped up efforts to provide aid to Syrian refugees in Lebanon.

In August 2016, Chechen authorities announced that the Akhmat Kadyrov Foundation would construct a medical center for refugees in Syria large enough to accommodate 38,000 patients. It is unclear if the center was ever built. Roughly concurrent with the deployment of Chechen military police to Aleppo in December 2016, Kadyrov organized the shipment of 80 tons of humanitarian aid via the Akhmat Kadyrov Foundation on Dec. 24. Highly-publicized Chechen aid shipments continued throughout 2017, including a 10-ton package delivered in February and an unspecified amount of food aid sent to 10,000 Syrian families during Ramadan in June.

Chechnya has proven a highly useful tool for Moscow in engaging with Syria throughout 2017. The year’s outreach efforts opened with great fanfare as Chechen military police toured recently-recaptured Aleppo, handing out aid to local civilians. They were visited within weeks by high-ranking Chechen officials including Grand Mufti Mezhiev and Russian senator Adam Delimkhanov, often seen as the second-most powerful man in Chechnya.

Syrian religious authorities visited Grozny a number of times throughout 2017, including in May and November, building on ties first established when Damascus scholars attended a Grozny conference on sufism in August 2016. Damascus also sent religious figures to Makhachkala, in the republic of Dagestan to Chechnya’s east, to discuss local authorities’ counterradicalization efforts. Beyond religious links, the large ethnic diaspora of North Caucasians in the Levant facilitates such ties: Ziad Sabsabi, Kadyrov’s point man in Syria and Iraq, was himself born to a Chechen family in Aleppo.

While these efforts were significant, the last month has seen a major increase in Syrian-Chechen contacts, as well as other North Caucasian links. The republic of Ingushetia, a neighbor of Chechnya, sent a 25-ton aid shipment to Syria at the beginning of January. The contents of this package were distributed to Syrians by Ingush military police stationed in the country, as Russian authorities sought greater face-to-face interaction between its Muslim servicemen and Syrian civilians.

Meanwhile, official Chechen-Syrian interactions reached an unprecedented level. Grand Mufti Mezhiev made a three-day visit to Syria from Jan. 6-8, meeting with the governor of Aleppo and religious figures as he toured the site of the Umayyad Mosque, where Chechen-funded reconstruction is ongoing. On Jan. 14, a Syrian religious delegation visited Chechnya, meeting with Mezhiev and visiting local religious education institutions. Several days afterward, Chechen and Syrian authorities established Grozny’s new “Union of Learners in the Syrian Arab Republic,” designed to further educational contacts between the two. Combined with extant plans to establish a campus of Damascus University in Grozny, educational links between Syria and Chechnya are reaching heights not seen even between Damascus and Moscow.

It would seem that Moscow’s initiatives have found some success in the eyes of the local population. In the al-Waer district of Homs, where North Caucasian military police oversaw a rebel evacuation, locals reported being amazed to see “Russian soldiers performing Islamic prayer rites in the street.” Other reports suggest that locals in Syria have viewed Russian and North Caucasian servicemen largely positively, at least in relative terms. Civilians see their activities as more lawful than those of Iranian-backed or pro-regime militias, who they see as more likely to engage in looting or other predatory behavior.

In the coming months, North Caucasian links and outreach efforts with Syria are certain to grow further. One probable development is a visit by Kadyrov to Syria sometime in 2018. During his own visit to Aleppo, Kadyrov’s deputy Adam Delimkhanov suggested that Chechnya’s head was planning to travel to the country. Such a visit would likely coincide with the reopening of the renovated Ummayad Mosque in Aleppo. Ingushetia is angling for a larger role as well, with Ingush President Yunus-bek Yevkurov offering his government’s experience in rehabilitating militants during a meeting with the Syrian ambassador in Moscow on Jan. 9. This is to say nothing of Kadyrov’s recent campaign to repatriate Chechen and North Caucasian children of former ISIS members killed in Syria, which is sure to continue. The question is thus not whether Chechnya, Ingushetia, and other Russian Muslim regions will deepen their involvement in Syria, but what form their engagement will take.