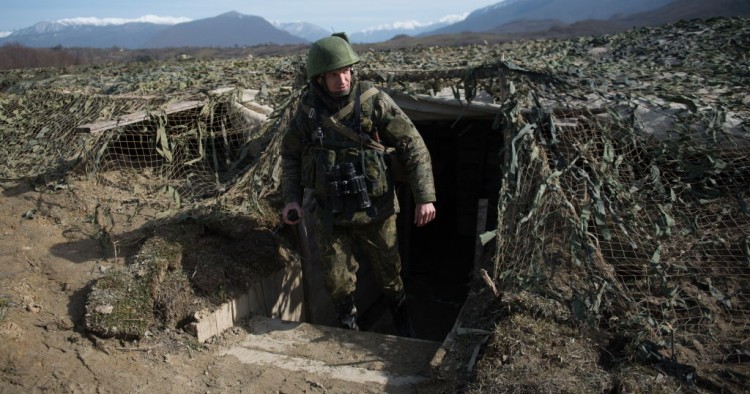 In the 1990s, the international community was faced with the monumental challenge of preventing atrocities committed in the Balkans and Rwanda while respecting principles of sovereignty. United Nations Secretary-General Kofi Annan repeatedly called on member states to find common ground and avoid “gross and systemic violation of human rights.” To respond to the call, the International Commission on Intervention and State Sovereignty (ICISS), set up by the Canadian Government, launched discussions on the principles of Responsibility to Protect (R2P). Member states committed to the principles at the 2005 UN World Summit.

Where most of the international community sees R2P as a mechanism for protecting human rights when a state cannot or will not ensure them, Russia’s take on the same concept focuses on the protection of national sovereignty at any cost. However, Moscow’s commitment to the notion of sovereignty has been selectively applied to the states of the Middle East and the Black Sea.

R2P and non-interference in Syria

Five years after Russian military engagement began in Syria, troops remain on-the-ground in support of President Bashar al-Assad and his efforts to regain control over the conflict-torn country.

Local and international agencies have consistently reported Moscow’s vocal opposition to external forces using R2P to intervene in Syria and help prevent human atrocities. As Russian leaders have repeatedly claimed, military intervention in Syria would challenge international law, particularly “the principle of sovereign equality of States.” However, Russia has shown greater sympathy towards Pillars I and II of R2P, which address the responsibility of states to protect their population from genocide, war crimes, ethnic cleansing and crimes against humanity; and the commitment of the international community to support states for them to meet their responsibilities.

While blocking all possibilities for external intervention within the R2P framework, Russia has itself engaged militarily in Syria. The Kremlin uses the official invitation of the Syrian government as primary justification for its manoeuvres. Moscow’s rhetoric points to the principles of Pillar II, which considers helping states build their capacities to meet the demand of Pillar I. However, the question remains whether the Syrian government or Russian forces have demonstrated their commitment to protecting civilians and avoiding unnecessary human loss during the conflict.

It is difficult to find a year since Russian engagement when there hasn’t been a report of hundreds of deaths and thousands of displaced Syrians. Just last year, the Russian-Syrian military alliance killed more than 500 civilians in Idlib and displaced one million people in less than three months. Human Rights Watch counts alarming numbers of medical facilities, schools and residential areas destroyed by their joint armed actions. As of September 2019, around 8300 civilians had been killed by Russian warplanes.

Moscow’s actions in Syria have clearly demonstrated that its determination to veto R2P was not about non-interference, but rather the purpose of the intervention and who carries it out. In terms of purpose, Russia chose to stand for national sovereignty over human rights in Syria. However, the scale of Russia’s military engagement and dominance over the airspace raises some questions about the sovereignty of the Syrian state.

Russia’s ‘responsibility’ to protect in the Black Sea

At the same time the Kremlin was portraying itself as an advocate for ‘principles of sovereign equality of States’, Russian troops were deployed to annex Crimea and challenge the unity of Ukraine in Donbas. It was also strengthening its political and military power in the occupied territories of Georgia.

Moscow’s commitment to principles of sovereignty in Syria is somewhat surprising, given it began violating the same principle in August 2008 when Russian troops invaded Georgia. Accusing the Georgian government of committing ‘genocide’ against the people living in South Ossetia/Tskhinvali, the Kremlin tried to justify its offensive as an intervention to protect human rights under Pillar III of R2P. It became clear Russia lacked solid evidence for ‘genocide’, or any other crimes defined under Pillar III. On top of this, Russia did not seek authorisation for military intervention from the United Nations Security Council, despite insisting this was mandatory in other R2P cases. Soon, Russia switched its narrative to the decades old nurtured principle of ‘protecting Russian citizens’ and their human rights.

The argument that Russia’s interference in Georgia is aimed at protecting the local population and Russian peacekeepers is unconvincing. Within a few days of the attack, Russia had occupied territories far beyond the conflict zone. The Kremlin simultaneously launched a military attack from Abkhazia, another breakaway region of Georgia where Russia was responsible for keeping peace under the Commonwealth of Independent States (CIS) and UN mandate. It also used its Black Sea navy to attack the Georgian coast. Considering the scale of the intervention and size of its force, it was clear the Kremlin’s actions were well prepared in advance, and their interests were not related to human rights but rather undermining the Georgian state and its sovereignty.

Russia could not justify its intervention in neighbouring states as at the behest of their governments (as it later did with Syria), and so adopted a different tactic for Ukraine. Despite the absence of a threat of genocide or significant violation of human rights, Moscow still felt responsible to take ‘preventive actions’ to protect Russian people in Crimea. ‘A humanitarian mission’ sent to prevent inexistent ‘ethnic cleansing’ in Ukraine paved the way for developing a new mission for the Kremlin – supporting the right for self-determination of ethnic Russians living in the peninsula. It took less than one month for Moscow to absorb the ‘self-determined’ and ‘protected’ Crimea into its borders.

In eastern Ukraine, Moscow questioned the legitimacy of the Ukrainian government, accusing leaders of responsibility for “massive loss of human lives” and an “appalling human disaster.” However, Russia’s political and military support in emerging and strengthening secessionist groups in the regions of Donetsk and Luhansk has led to more than 10,000 deaths in the past five years. Examining the early development of the conflict, it is legitimate to ask: would there be a war in Ukraine without the Kremlin’s direct and indirect interference in the domestic affairs of the country?

Moscow’s self-proclaimed responsibility to protect Russian people in the Black Sea, also known as the area of its ‘special interests’, “represent[s] a clear breach of its professed attachment to the principle of sovereignty.”

Comparing Russia’s strategy in Syria against its strategy ‘near abroad’ shows a deliberate inconsistency in its approach to international law and policy, including R2P. Interestingly, arguments made by Moscow to disgrace the West for their willingness to intervene in the Syrian crisis are more accurate for denouncing Russia’s actions in Georgia and Ukraine.

However, despite contradictions in its official rhetoric, Moscow takes advantage of R2P principles to create‘controlled instability’ and challenge EU and the US positions in these countries.

Rejecting the international community’s interference in Syria to protect human rights, President Vladimir Putin claimed his support was intended to “stabilise the legitimate government and create conditions for finding a political solution.” However, a warning of holding back its assistance in 2016 revealed Russia’s primary interest was taking control of Syrian instability by keeping President al-Assad in power, but under the Moscow’s terms.

In Ukraine, the annexation of Crimea under the guise of ‘protecting human rights’ and ‘preventing ethnic cleansing’ would be enough to destabilise the country and challenge its sovereignty. But the Kremlin took extra care to create protracted instability in Donbas so it could control Kyiv’s foreign affairs, especially Ukrainian aspirations to join the EU. Importantly, Moscow-backed secessionist leaders do not allow any international organisations in the territories of Donetsk and Luhansk, including to distribute humanitarian aid during the COVID-19 outbreak.

Through ongoing manipulation with the so-called ‘borderization’ process and by detaining and torturing locals, Russia has established a constant sense of instability and uncertainty within the population of both Georgia proper and the occupied Georgian territories. As the primary purpose of Russia’s ongoing occupation is to divert Georgia from its path to NATO and EU membership, the Kremlin has blocked international missions – including UN and OSCE observers – from monitoring and supporting stable and peaceful settlement of the conflicts. When it could not veto the EU Monitoring Mission in Georgia, Moscow limited their access to the disputed territories.

Russia’s engagement in Syria, Ukraine and Georgia demonstrates that, while the exploitation of international laws and norms can set dangerous precedents, such manoeuvres also have direct consequences for thousands living in conflict-affected areas. Being forced to live under this constant threat and uncertainty drains essential capacities within society, as well as hope for building sustainable peace.

The concept of R2P was developed as a framework for the international community to take action for global peace and stability. However, in Russian hands, it has become a tool for justifying its growing appetite to dominate in the Black Sea and the Middle East.

Ketevan Murusidze is a Research Assistant at the University of Bradford in the UK. The views expressed in this article are her own.