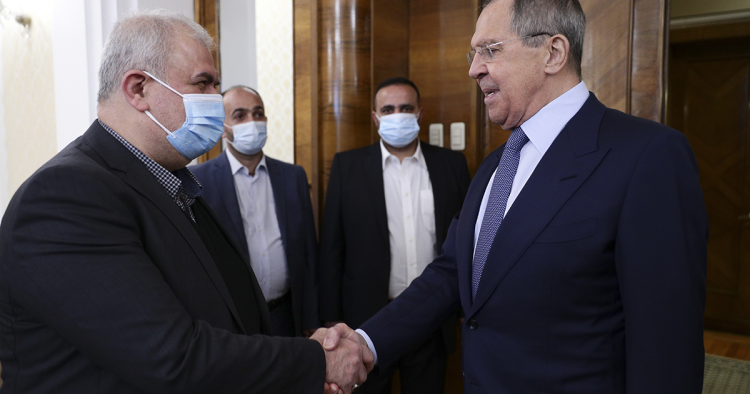 Russia is quietly strengthening its partnerships with Iran-aligned militia groups throughout the Middle East. On March 4, Houthi leader Mohammed Ali al-Houthi asked Russian Foreign Minister Sergey Lavrov to visit Yemen and urged Russia to reopen its embassy in Sanaa. On March 15, Mohammad Raad, the head of Hezbollah’s parliamentary bloc, met with Lavrov in Moscow. Raad’s trip was likely triggered by Lavrov’s meeting with Prime Minister-designate Saad al-Hariri in Abu Dhabi, which included talks on Lebanon’s economic crisis and the Syrian civil war. Syria was also a critical agenda item, as Raad reportedly probed Lavrov on his long-term commitment to President Bashar al-Assad and sought reassurance about the March 11 Russia-Qatar-Turkey meeting on Syria.

While Russia’s military alliance with Hezbollah in Syria is well-documented, its relationships with Iran-aligned militias elsewhere in the MENA region are often overlooked. Russia engages with Hashd al-Shaabi (or Popular Mobilization Forces) in Iraq on security challenges, defends Hezbollah from terrorism allegations, and holds negotiations with the Houthis on ending the Yemen war. These relationships bolster the Russia-Iran partnership, further Moscow’s regional ambitions, and help Iran-aligned militias diversify their array of global partners.

Russia’s partnership with Hashd al-Shaabi, an umbrella organization of 40 mostly Shiite militias, is arguably its deepest among Iran-aligned militia groups. It crystallized during a December 2016 meeting between Hashd al-Shaabi leader Falih al-Fayyadh and Russia’s Secretary of the Security Council Nikolai Patrushev. During their meeting, al-Fayyadh and Patrushev discussed counterterrorism strategies that would not infringe upon state sovereignty and prospects for developing bilateral relations.

Since al-Fayyadh served as Baghdad’s messenger and handed Patrushev a letter from Iraqi Prime Minister Haider al-Abadi, Russia has acknowledged Hashd al-Shaabi’s indispensable place within the Iraqi military. Russia also established a line of communication with it on Syria, which led to subsequent meetings between al-Fayyadh and Russian Ambassador to Syria Alexander Lavrentiev. Hashd al-Shaabi maintains close relations with Assad and could help Russia regulate violence on the Syria-Iraq border.

Russia’s relationship with Hashd al-Shaabi resurfaced following Israel’s drone strike on a Hashd al-Shaabi military facility near Baghdad in August 2019. Even though Saudi newspaper Asharq al-Awsat reported that Russia green-lit three Israeli strikes in Iraq that month, al-Fayyadh met with Russian Ambassador to Iraq Maxim Maximov after this attack. These talks, which were followed by Iraqi Parliament Speaker Mohammed al-Halbousi’s request for Russian military assistance, encouraged al-Fayyadh to travel to Russia in September 2019. During his trip to Moscow, al-Fayyadh met with Patrushev and discussed the possibility of securing Russian military equipment. As Russia will almost certainly transfer military equipment, such as the S-400 missile defence system, to the Iraqi government, rather than Hashd al-Shaabi, the results of these negotiations hinge on the foreign policy orientation of the authorities in Baghdad.

Russia’s diplomatic relationships with Hezbollah and the Houthis

While security issues fuel Russia’s cooperation with Hashd al-Shaabi, Moscow’s diplomatic aspirations drive its engagement with Hezbollah and the Houthis. Unlike the United States and the European Union, which label Hezbollah as a terrorist organization, Russia strongly opposes this designation. In January 2018, Russia’s Deputy Foreign Minister Mikhail Bogdanov described Hezbollah as a “legitimate force,” which was elected by the Lebanese people to parliament. This statement reflects Russia’s broader normative resistance to U.S. terrorism designations in the Middle East; in a similar vein, Bogdanov has described Hamas as an “integral part of Palestinian society.”

Russian officials also highlight Hezbollah as a constructive force in Lebanese politics and regional affairs. In March 2019, Russian Ambassador to Lebanon Alexander Zasypkin claimed that “Hezbollah has entered the war on terrorism in Syria” and asserted that Hezbollah guarded Lebanon’s stability by preventing Syria from becoming “lawless” like Libya. These arguments, which reinforce Iran’s narratives on Hezbollah, influence Russia’s participation in United Nations debates. In December 2017, Russia threatened to veto the renewal of U.N. Security Council (UNSC) Resolution 1701, which extended the U.N. peacekeeping mission in Lebanon, until paragraphs criticizing Hezbollah were removed.

While Lebanon’s economic crisis creates a poor climate for international investment, the Russia-Hezbollah partnership’s economic implications should not be wholly discounted. As the Hezbollah-aligned March 8 alliance controls the Lebanese parliament, Russian energy companies, such as Gazprom, Lukoil, and Rosneft, could be well placed to outcompete their European counterparts for access to Lebanon’s oil and gas sectors. In addition, Hezbollah views Russia as its bridge to anti-Western countries across the world and has attempted to leverage China’s agreement with Russia on the terrorism question to secure humanitarian aid.

Russia’s relationship with the Houthis is more limited and less consistent than its interactions with Hashd al-Shaabi or Hezbollah. Russia abstained from UNSC Resolution 2216, which imposed sanctions on the Houthis and maintained an embassy in the Houthi-controlled capital of Sanaa until late 2017. However, Russia has repeatedly refused to establish commercial relations with the Houthis and ignored their petitions for a diplomatic intervention on their behalf. Russian Foreign Minister Lavrov condemned the Houthi-orchestrated assassination of former Yemeni President Ali Abdullah Saleh in December 2017 and has criticized Houthi strikes on Saudi Arabia’s civilian infrastructure. Nevertheless, Russia periodically hosts Houthi chief diplomat Mohammed Abdulsalam in Moscow and opposed designating the Houthis as a terrorist group. Russia justifies these policies by insisting that the Yemen conflict can only be resolved through an all-inclusive intra-Yemeni peace process. This contention mirrors Iran’s stated position on ending the Yemeni civil war.

While Russia’s relationships with Iran-aligned militia groups vary in depth, Moscow’s patterns of diplomatic engagement with these organizations deserve more attention. As Russia’s economic interests in Iraq and Lebanon grow, and the Yemen conflict transits toward a peace settlement, Moscow’s relationships with Hashd al-Shaabi, Hezbollah, and the Houthis will continue to strengthen for the foreseeable future.

Samuel Ramani is a doctoral candidate at the University of Oxford’s Department of Politics and International Relations specializing in Russia’s relationship with the Middle East. He can be followed on Twitter@samramani2. The opinions expressed in this piece are his own.