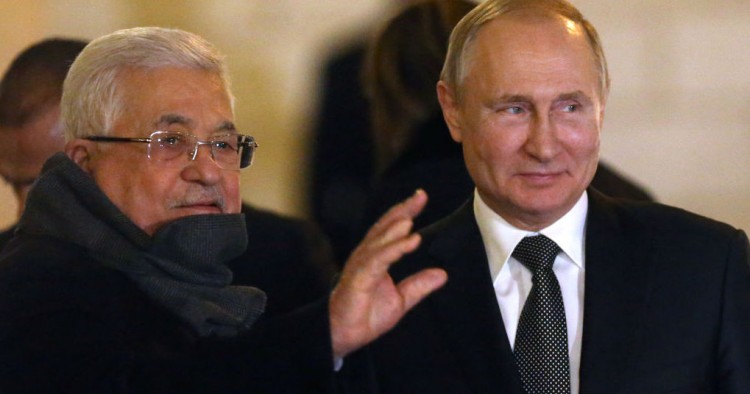 The last few days have seen an unprecedented flurry of Russian activity on the Israeli-Palestinian track. On May 19, Russia’s Deputy Foreign Minister and Vladimir Putin’s Special Envoy for the Middle East and Africa Mikhail Bogdanov spoke on the phone with Assistant to the U.S. President and Special Representative for International Negotiations Avi Berkowitz. The presser from the Russian Foreign Ministry says Bogdanov and Berkowitz had “an in-depth discussion on topical issues on the Middle East agenda with an emphasis on the prospects for the Palestinian-Israeli settlement.”

On the same day, Bogdanov also spoke with the top Palestinian negotiator, Saeb Erekat, offering him “the assistance of the Quartet of international mediators” in the peace process — that is the United Nations, the European Union, the United States, and Russia. Earlier on May 19, Palestinian President Mahmoud Abbas announced that Palestine was withdrawing from all agreements with the U.S. and Israel.

The next day, newly appointed Israeli Foreign Minister Gabi Ashkenazi called his Russian counterpart Sergey Lavrov. Among the issues the two diplomats discussed, the focus — once again — was on the Middle East peace process. This is a rare departure from the agenda of the last few years, which has largely revolved around Iran and the presence of Shi’a militias in Syria.

Lavrov reiterated Russia’s willingness to facilitate the resumption of the peace process “via a direct dialogue between Israelis and Palestinians within a generally recognized international legal framework” — that is, in Moscow’s view, with other members of the Quartet.

Later that day, Palestinian Ambassador to Russia Abdel Hafiz Nofal told Russian journalists that President Abbas had sent a letter to President Putin a “few weeks ago” asking the Russian leader to convene an international conference in Moscow that “should create a new mechanism for negotiations between the Israelis and Palestinians to discuss the peace process.”

Russia’s latest overtures on this track have a certain history and follow a fine blueprint.

The Soviet intellectual and political tradition has deemed the Israeli-Palestinian conflict the root cause of most socio-political problems in the contemporary Middle East. Following the break-up of the Soviet Union, Russia was virtually sidelined from the Israeli-Palestinian peace process. Moscow’s “institutional return” to the settlement of the issue came with the establishment of the Quartet on the Middle East in 2002. At the time, however, neither Russian resources nor its political influence allowed it to keep on par with the U.S. on key decisions regarding the conflict. The Arab Spring, the subsequent rise of ISIS, and the focus on Iran have seemingly shifted the conflict dynamics in the Middle East away from the Israeli-Palestinian issue. Yet negative developments on the ground for the Palestinians in the last few years coupled with President Donald Trump’s ambition to implement his “deal of the century” revived international attention on the peace process.

Moscow was initially skeptical of Trump’s peace plan and concerned over its possible implications for the future of the Israeli-Palestinian talks and regional stability. Russia’s military campaign in Syria, its diplomatic efforts within the Astana group, and moves on other chessboards reasserted its standing in the region and boosted the confidence of the Russian leadership that this time Moscow could be more relevant to the peace process than in previous decades. Ever since Russia has dedicated significant time and energy to get itself back in the game.

On some aspects of the issue Russia has sought to demonstrate a more nuanced approach than the U.S. For instance, on April 6, 2017, eight months before Trump’s decision to recognize Jerusalem as the capital of the State of Israel, the Russian Foreign Ministry issued a statement that Russia recognized West Jerusalem as the capital of Israel and named East Jerusalem as “the capital of the future Palestinian state.” Russia hasn’t moved its embassy from Tel Aviv though, which formally allowed Moscow to stay within the “internationally recognized framework” regarding the “future Palestinian state.” At the same time, it made an important symbolic gesture to the Israelis — ahead of the Americans.

That said, Moscow understood the importance the peace plan had for President Trump and recognized the U.S. was going to proceed with it regardless. Seeking ways to engage with the Trump administration, the Kremlin was thus cautious about throwing a wrench into the works — especially since it presumed the plan was going to get stuck at some point anyway all by itself. Therefore, while top Russian diplomats have occasionally voiced criticism of the Trump initiative, the Kremlin has instead elaborated concrete proposals on which to cooperate with the White House. It has suggested potential joint patrols of the Golan Heights and other measures to provide security for Israel — the proposals that Putin made to Trump during the notorious Helsinki Summit in summer 2018.

Realizing that none of these proposals were likely to materialize, Moscow moved to gradually reclaim its own status as an important middleman in the peace settlement. While relations with Israel revolved around de-confliction in Syria and Iran-related security matters — primarily through the Kremlin, Defense Ministry, and intelligence agencies — Russia’s Foreign Ministry has focused, at least since late 2018, on succeeding where Egypt had previously failed: reconciling Palestinian factions.

In February 2019, Moscow hosted 12 Palestinian movements — including Fatah, Hamas, and the Islamic Jihad Movement — in an attempt to settle the divisions between them. The efforts have borne little fruit so far but Moscow keeps plugging away. Moreover, it keeps seeking every opportunity to upgrade the relationship with the Palestinians and reinforce its potential intermediary role.

Moscow’s response to the Trump plan

When Trump released the political portion of his plan in late January 2020, Moscow, somewhat surprisingly, reacted calmly. The change in tone was likely a sign that Moscow was still willing to get on board with the plan if it could find an opening for itself. Well aware of the complexities of the plan, the divide it has created among Arab elites, and its general dismissal by the Arab street, Moscow has adopted a wait-and-see approach. At the time the calculation was that if the plan was going to be rejected by the Arabs, Russia wouldn’t look like the one that torpedoed it. If the plan went through, which was deemed in the Kremlin as unlikely without some Russian and European engagement, Moscow would have a stake in the process. The former part of that calculation has proved right: The Palestinians rejected the deal and Russia has not been blamed for it. The latter, however, has not: The Russians were not engaged by the U.S.

Israeli Prime Minister Benjamin Netanyahu’s latest plans “to apply Israeli sovereignty to Jewish settlements and the Jordan Valley,” that is, annexation, resulted in renewed escalation and set off a new round of maneuvers by the interested parties.

Russia has responded to the move with a mix of old and new initiatives. First, it has reenergized its mediation between Palestinian factions. Second, it proposed a return to the Middle East Quartet. Finally, it has offered to facilitate a meeting in the next few weeks between the U.S. and the Palestinian Authority.

The last one is, perhaps, the most intriguing component of the Russian effort. As Barak Ravid reported for Axios, the UN and the EU presumably support the initiative while the Palestinians “are not ruling it out,” even though they haven’t given a final answer just yet.

In the midst of the re-election campaign and with “all things Russia” seen as toxic in Washington, Trump is unlikely to embrace either Moscow’s initiative to broker direct American-Palestinian talks or even to sit down with the rest of the Middle East Quartet for the planning of a peace settlement. Even if the president cares little about criticism from his political opponents, taking a step back from his peace plan wouldn’t fly well with his base — or, perhaps, so he would think. This probably explains why in the phone conversation with Bogdanov, Berkowitz allegedly said that a meeting between Americans and Palestinians, should it ever take place, would have to be centered around the Trump plan, and that the Palestinians “would have to present their reservations and their proposals for changes to the plan.”

This virtually nixes the Russian idea of returning the settlement to the Quartet framework. But even if that’s the case, Russia could still score political points with third parties for coming up with a constructive proposal that was rejected yet again.

Is there room for cooperation?

But there might be an opening for the U.S. in this in the post-election cycle.

The Trump plan, while offering some benefits for the Palestinians, has come to be seen as favoring Israel. Russia’s position vis-à-vis Israel has evolved as well, from confrontational and openly pro-Arab during the Soviet times to more engaging, if not sympathetic, to Israeli concerns under Putin’s presidency. As recently as May 17, Putin sent a message to congratulate Netanyahu on assuming office for another term as Israeli prime minister. In the message the Russian president stressed the personal chemistry the two leaders have developed over recent years, and emphasized the “mutually advantageous cooperation” between the two nations — the latest public manifestation of what the Kremlin currently appreciates in its dealings with Israel.

Yet, the long standing tradition within Russian diplomacy of supporting “the Palestinian cause,” the strong personal and historic ties between Moscow and most top Palestinian leaders, as well as Russia’s image as a “new power broker in the Middle East” might position Russia as a good partner for the U.S. to push the peace process forward from its current deadlock. Over the last few years, the issue has indeed grown too complicated to untangle unilaterally.

It is, perhaps, Russia’s in-your-face geopolitical ambition to challenge the U.S. in the Middle East that leaves little appetite in Washington to cooperate with Moscow on this and other regional matters. Arguably, this is not actually Russia’s ultimate objective. Rather, it is what Moscow does — and will continue to do — until it’s engaged, or, in the Russian narrative, “recognized as an equal partner.” The conflict in Syria didn’t work out as a venue for cooperation, as the Kremlin wished. As cliché as it sounds, on the Israeli-Palestinian issue too Russia could either be part of the problem or part of the solution for the United States — either acting as a spoiler or helping the Trump administration save face. The peace process has long been a source of fatigue and a political “hot potato,” but it might give the U.S. and Russia another chance to cooperate in the Middle East.