Sabiha Sumar of Pakistan is not just a pretty face. The smiling, dark eyes, framed by flowing dark hair, and an apparently sunny personality, hide a passionate woman with a lot to say. She is an award-winning documentary maker and film director focusing on ordinary Pakistani women whose lives have been disturbingly disrupted by the political, religious, and social changes that have taken place over the last 60 years or so.

Sumar was born in the populous port city of Karachi; she studied Political Science and learned the art of filmmaking in New York. She armed herself further by reading International Studies at Cambridge University. Only then did she attempt her first documentary, Who Will Cast The First Stone, in 1988 — she was 27 at the time. This powerful, sensitive story argues for the release of three working-class women jailed for simply demanding basic human rights such as choosing who to marry and asking for the custody of their children. The film went on to win the Golden Gate Award at the San Fransisco Film Festival in 1998.

This first work was fundamental, as Sumar explains: “It was made during the reign of president Zia ul-Haq, who was busy Islamizing Pakistan [1977-1988], ruling by Islamic law. Filming in these circumstances was extremely difficult. I don’t know how we managed to complete it.” 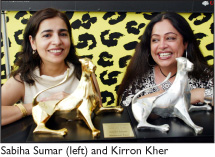 Sumar’s first feature film, Khamosh Pani (Silent Waters), was a touch easier to shoot but had a more substantial, profound scope: it denounced the rise of fundamentalism in Pakistan through the story of a widow, Ayshe (played by Indian actress, TV-host, and journalist, Kirron Kher) and her son, Salim. Increasingly less interested in marrying the beautiful Zoubida and playing the flute, Salim becomes more interested in keeping company with Muslim extremists. We are also told in flash-backs some painful episodes of recent Pakistani history. We learn that in the old Indian state of Punjab, Muslims and Sikhs lived as good neighbors till it was decided that the two communities should live in separate countries — partition thus followed in 1947. In the ensuing chaos, women from both religions were raped, abducted, and even murdered. Their menfolk kill them to prevent their falling into the hands of enemies, as a voice-over emphasizes: “Fathers would kill daughters in the name of honor. People moved like the sea, leaving everything behind.”

I first met Sabiha Sumar in 2003 at the Locarno Film Festival in Switzerland, one of the world’s best-attended film events, where Khamosh Pani competed with 17 other films from around one of the world. The jury liked Sumar’s film so much, they decided to add to her Golden Gate Award another top prize, this time a Golden Leopard; Kirron Kher was voted the best actress. Sumar was back at the Swiss festival the following year as a jury member herself. 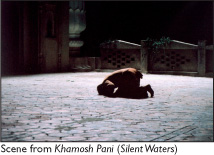 What prompted the gifted cineaste to make Silent Waters? “Families in modern-day Pakistan are still haunted by the bitter memories of partition,” Sumar explains. She continues:

Initially it was going to be a documentary on the violence against women during the partition period, but I didn’t really want to scratch people’s wounds further. I decided to make a film instead. This way I could also connect the violence in the past with the on-going violence in the present, otherwise it would have been a historical film that may have given the impression that what happened then was over and had no reference to today. It is all based on fact. My parents themselves had to abandon their home in Bombay and flee to Karachi in 1947. On the way, they witnessed much heart-breaking episodes. My mother told me that when she was travelling to Karachi by ship, they met a man called Abdul who was carrying a small trunk with him, and he kept opening it and taking things out like glasses, a little tumbler, children’s clothes and baby shoes. He would talk about how so and so wore this and so and so wore that. My parents eventually realized Abdul’s family had been killed and these few possessions were all he had left of them. My grandparents ‘adopted’ Abdul, and the family, which already numbered 12, gained a new member.[1] 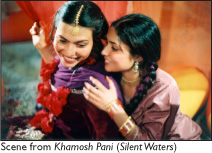 Sumar dedicated Silent Waters to her parents. The movie toured many festivals, but what the director really wanted was to show it to the ordinary people in Pakistan who in a way were also the protagonists of the story. “There are no acting schools in Pakistan, the film culture was virtually eliminated during Zia’s Islamization period,” Sumar reveals. She found a way to compensate:

I made an effort to cast as many local people as possible from around the location where we shot, so I worked with inexperienced talent and conducted acting workshops to train my cast. To show it to the people we created a travelling cinema and toured some 41 villages across Pakistan, we had lengthy discussions on the film’s content and meaning with the villagers. One young man asked why Salim didn’t just carry on playing the flute and turned to Islamic fundamentalism, the answer is, at the time Pakistan had wiped out all possibility of participating in the arts or culture, in a way the youth became easy prey for the extremists because they had no options to turn to. 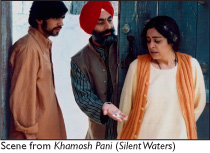 Sabiha Sumars’s main interest remains present-day Pakistan and the place of women in it. Her 1999 documentary, Don’t Ask Why, explores the lifestyle and attitude of a 17-year-old girl trying to carve out a place for herself, pushing and testing the boundaries of an Islamic society as she knows it. More documentaries followed Silent Waters, such as For a Place Under The Heavens, in which the director took the concept of emancipating women further: Here we have a brief history of Pakistan arguing that a succession of governments contributed to the rise of fundamentalism, followed by interviews with confident, highly-educated, independent Pakistani women, discussing politics and religion. The message is clear: Not all women in Pakistan are passive and silent. We have Sabiha Sumar herself, talking to an Islamic scholar who interestingly points out, “Islam does not stop women from moving forward. They can come forward and take charge.” “But, would they give up power if women demanded it?” the director wonders, “It would take a revolution,” he responds, “No one relinquishes power easily.” Sumar can’t but agree with the scholar, “Women are not demanding rights. Are they organizing themselves politically? Coming out in the streets? Do they occupy public spaces? They don’t.”

In 2008 Sumar was at the Sundance Film Festival with her latest documentary, Dinner With Tthe President, which raises questions about democracy in Pakistan through a series of interviews with ordinary people and religious leaders, and culminates in a dinner with Pervez Musharraf, who faces a battery of questions, including what his vision of Pakistani democracy is. Sumar’s outspoken, courageos effort was nominated for the Grand Jury Award. She is currently working on her second feature film, Rafeena, focusing on the aspirations of a 20-year-old girl from a lower-middle-class background who is determined to find a place for herself in the world of fashion in today’s Pakistan.

[1]. Conservative, official estimates put the number of abducted women to 50,000 Muslims in India and 33,000 Hindus and Sikhs in Pakistan.