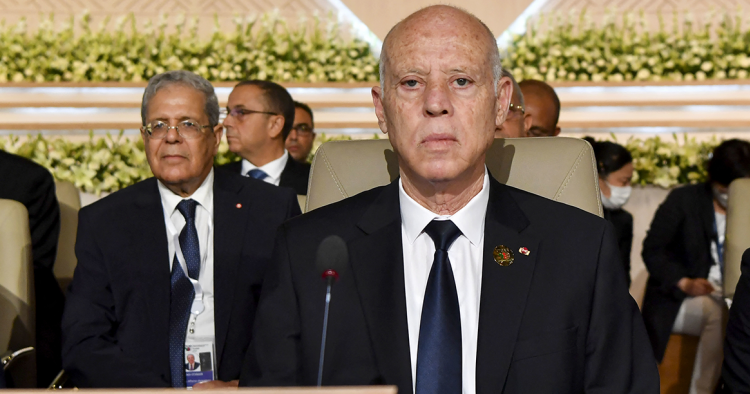 With the decree of a new election law on Sept. 15, President Kais Saied continues rebuilding the formal political mechanisms of the Tunisian state — what some see as a “third republic.” The new law sets the terms for the legislative elections scheduled to be held on Dec. 17, 2022, and it comes only shortly before nominations for candidacies for those elections begin on Oct. 17. The law, presidential decree 55 of 2022, updates law number 16 of 2014, but interestingly only the sections relating to legislative elections, for now leaving the presidential election process untouched. As for the second legislative chamber introduced by Saied’s new constitution, the National Assembly of Regions and Provinces, the new law doesn’t address elections for that body (which are scheduled to be held at a later date).

Constitutionally, the new Assembly of People’s Representatives will have much less power than previous assemblies did: It will no longer have any executive power through the appointment of the now-gone prime minister (“head of government”) position; it will no longer have any power to check the presidency; the role of the opposition bloc within the assembly is no longer guaranteed, let alone reserved key committee presidencies, as it was under article 60 of the previous constitution; and the government is now explicitly accountable to the president rather than the assembly, largely removing the latter’s oversight capacity. On top of this, most of the political parties that were successful in previous elections had already announced that they would boycott the next legislative elections before the promulgation of this new election law because they said it was written by Saied alone. Meanwhile a few parties waited until after the new election law was decreed to declare their boycott.

Because the body will have significantly less power, the outcome of these elections will be relatively inconsequential in terms of shifting the balance of power within the government or providing any alternative or opposition to President Saied’s project; however, they will likely be consequential in terms of creating new networks of power and perhaps new organizational capacity among certain constituencies. Some have suggested these newly empowered constituencies will follow tribal allegiances, according to several hypotheses. Another possibility is that given the new law’s annulment of article 35 — which had prevented MPs from holding second roles in the government, local government, or at public sector companies — the new law might foster the emergence of new corporatist networks of power within the public sector.

While parties will be allowed to run in the elections according to the new election law, they will no longer enjoy the privileged position afforded them by the previous list-based system. Under that system, anyone wishing to stand as a candidate could not do so unless they had as many subordinate running mates on their ticket with them as there were parliamentary seats allotted to their electoral district — meaning that running mates in the bottom half of a ticket were virtually guaranteed to lose. This demanded a significant level of partisan loyalty and preexisting organizational capacity generally exclusive to parties. In the new law, the list system with a set number of parliament’s 217 seats reserved for large regions is abolished in favor of 161 much smaller voting districts, each voting for a single candidate, with a run-off among the top two candidates if neither reaches a majority in the first round.

However, this new system also introduces entirely new problems, such as a new organizational barrier to candidacy: needing 400 endorsements from voters within the district, half of them women and a quarter of them under the age of 35, according to the law’s updated article 21. This barrier has already drawn criticism of potential bias, such as privileging wealthy candidates. This could also be exacerbated by the law’s amendment of article 75, now changed to preclude public financing of election campaigns, with only private and self-financing still permissible. Even Saied’s supporters have criticized the endorsement system as introducing new forms of corruption, and the president has subsequently indicated his willingness to amend the law.

Another issue is that where the previous list system included a gender parity clause, whereby a ticket’s list of candidates had to alternate between men and women, the new law lacks such a mechanism. Although the previous law didn’t produce gender parity — as the heads of lists were dominated by men, and the heads were the most likely to make it into parliament — it did produce significantly higher representation for women in parliament relative to most other countries, with Tunisia 30th in the world by one estimate with 36% of MPs women. The dropping of the gender parity clause has already drawn sharp criticism from feminist groups.

More than just losing their overwhelming advantage with the new electoral law, parties may be set to run at a disadvantage — not due to any mechanism within the electoral code specifically but due to a recent announcement from a spokesperson at the Independent High Election Authority (ISIE) indicating that political parties will not have the right to campaign for candidates. ISIE Vice President Maher Jedidi later seemed to backtrack on this, saying during a televised interview that political parties would have the right to participate, but that such participation would be regulated by a soon-to-be announced decision by ISIE. Nevertheless, the mixed messaging from ISIE, combined with President Saied’s consistent rhetoric demonizing parties and his new powers over ISIE, is likely to further disadvantage parties. Yet this may have little practical impact given popular disillusionment with parties as well as many parties’ commitment to boycott the elections.

Punishment for bribing voters or preventing them from voting has increased sharply in the new election law — from a jail sentence for offenders from between six months to three years in the previous election law to two to five years in the new law; the fine for offenders has also gone up from between 1,000 to 3,000 dinars to 2,000 to 5,000. These harsher sentences align with President Saied’s virulent speeches denouncing some political parties and previous elections as corrupt. Another change in the law is the ability of voters to recall their MPs, literally sahb wikala, which means roughly “withdrawing [their popular] mandate” should an MP violate their nuzaha, or “integrity,” a rather ambiguous phrasing. But this feature, which Saied has long advocated for as part of his vision of direct democracy, won’t have any immediate effects as this recall power can’t be activated until an MP serves a full parliamentary term.

Fadil Aliriza is the founder and editor-in-chief of Meshkal.org, an independent news website in English and Arabic covering Tunisia, and a Non-Resident Scholar with MEI’s North Africa and Sahel Program.