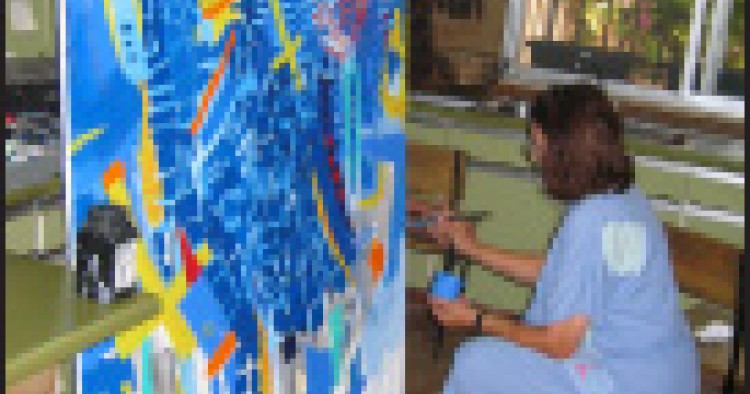 I have wanted to tell the world about Samia Zaru for a long time. It is difficult to write about her, not because her works are inscrutable — for they are straightforward — but because the sheer power of the woman herself gets in the way. She embodies contained passion and tough love ... she combines a restless mind, a contrarian’s tongue, a designer’s eye, and a compassionate soul.

I was first introduced to her in Jordan in 1977, when I was doing research on Middle Eastern artists for Aramco magazine. The dramatic energy of both the artist and her work continues to impress me. Her oeuvre is multidimensional and multimedia, her mission steadfast, and her physical and emotional strength immense. As my career veered from art museum director to Fulbright scholar to writer/researcher on women’s empowerment in the Middle East and North Africa (MENA) countries, her art became ever more relevant to me. It is fitting that her painting, “Determination,” appears on the cover of my book Women’s Voices in Middle East Museums.

She would blanch at the designation of legend, but her art, as well as her influence as an educator and lecturer, is acknowledged worldwide. In 2000, Samia Zaru was honored as Woman of the Year by the American Geographical Institute. Yet, she did not intend to become an artist or a teacher. Born in Nablus, Palestine, she began university studies at the American University of Beirut, planning a career in medicine but while there discovered the world of art. After graduation, she pursued graduate studies in art at the Corcoran School of Art and American University in Washington, DC. She has exhibited internationally in one-person as well as group shows. Her works are part of the permanent collections of museums throughout the world. Over the years, Zaru has represented Jordan at several international cultural conferences.

In addition to her art production, Samia Zaru believes in art expression as an important social and political forum and so began teaching at the UNRWA Amman Teacher Training Center. Even today, she constantly refers to herself as an educator. For years, Zaru also was involved in the supply side of art: recognizing that artists in Jordan needed consistent and quality sources of art supplies, she helped promote the art scene on another level.

In 1977, I wrote in my journal: “As an artist she is well versed in many media ... in her production, she reflects the internationalism of her training. She is talented and confident ... to attempt the different tasks of monumental metal sculpture. She has chosen to portray her cultural heritage as subject matter ... this is her choice, not her boundaries.”

Painting, sculpture, book illustration, weaving, paper and fabric design, costume, woodcuts, badges, emblems, book covers, murals — little escapes her creative production. Her works are structured and orderly, even when they seem like chaotic abstractions. Design is always important, as is texture and balance.

In her works, whether bold abstracts or structured cityscapes with their geographic/urban symbols, everything has a connection, a relationship to other images either by color or black line. She says: “Line, it is the line — and line makes the form, the substance, the design. In teaching, I tell my students there are more than three dimensions. The line from your eye to the piece is the fourth, the personal dimension. Line, it’s always the line. Form comes later.”

Murals and urban art are an important part of her art production. Her first mural (1964) was made for the Ramallah Training Center (Palestine) and depicted the students and their activities. Another mural (1966), made for the Ramallah municipality, was entitled “The Heritage of Palestine.” When she came to Amman in 1969, she created several murals, including those for the Amman Automobile Club (1969), the Sports City (1978), the Orthodox Club (1980), and much later (2005) for the Children’s Museum and Al Hussein Gardens.

Broad-brushed collage paintings proclaim her passionate convictions. She creates power-packed forms filled with color. Colors in her early palette are not primary but acid green, ochre, and yellow; later, blue and orange are predominant. “I was haunted by the Jerusalem theme in the 1970s,” she says of her subject matter. The early 1976-78 paintings of cityscapes, views of ‘Amman or Jerusalem, are stark with domes, arches, geometric buildings, and hills. The crescent moon and the cross — Muslim and Christian symbols — always appear in these compositions. “New Horizon” (1979), featuring a swirling impasto sun and made specifically for her family’s new home in ‘Amman, embodies the color, style, and energy of her early period. Early landscapes feature slabs of color, her fingers grooving texture into the paint.

Many figurals and portraits are faceless, perhaps representing universal identity. An example is “Woman Seated in Repose” (oil on paper, 1959-60), done while a student at the Corcoran. Her figures seem abstract, outlined as if created in stained glass. They seem lost, searching, elongated, sexless.

Samia’s art is everywhere throughout her house. In July 2008 I watched the creation of “Crosses,” a six-foot high acrylic, as she painted it in her kitchen. “This is my domain, the kitchen,” she explained. (A companion piece also was being worked on in her studio on the grounds of her family’s villa). From a blank canvas, she began at the upper left. Blocks of blue, yellow, and orange spread down the canvas to the bottom right. Lines of a figure appeared. Colorful roundels were manipulated, resembling chrysanthemums. Strokes were quick, decisive. Bold crosses finished the design. Belying this latest creation, she asked: “Painting is for lazy people ... painting is always for the rich. Where is the energy?” Perhaps that is why, between 2005 and 2008, she has concentrated on murals and sculpture.

Her sculpture, “The Family” (Corten steel, 1976) is one of the first pieces of public art in ‘Amman, impressive at its site near ‘Amman’s Haya Center. Other sculptures in Jordan are at the National Gallery of Art and the Darat al Funun. Recently, she completed a 15-foot high sculpture, “Link I,” for the front of a communications building. The inspiration for this welded steel tower came from remembrance of an old Voice of America (VOA) poster with its radio waves circling, jabbing the air.

Samia Zaru continues to be inspired by former themes, returning to them often, but they constently appear fresh. There is always a new project in her mind, a new challenge. I asked her family how they see her work today. Her husband, Nadim, said: “I know she can do anything she puts her mind to.” Her daughter, Maha, added: “Her recent work is different because the suffering is gone. It’s freer. It’s outrageous.”

Samia Zaru is many things: an artist, educator, cultural promoter, role model, and now matriarch, living in a home that is a showcase for her art, a refuge for her family — both children and grandchildren — and a studio for her creative passions.