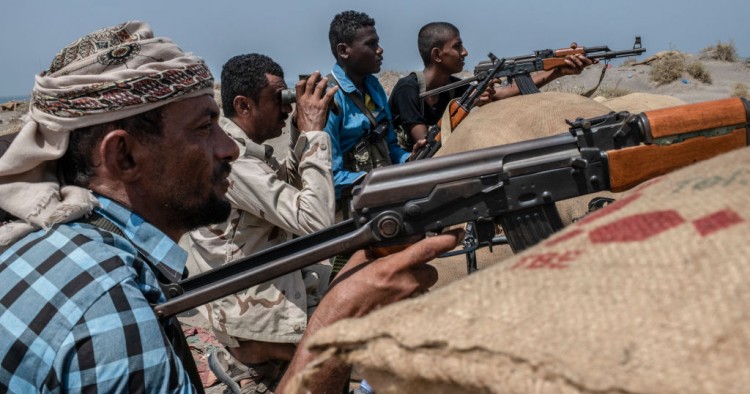 During the Munich Security Conference in February 2020, Saudi Arabia’s foreign minister, Prince Faisal bin Farhan, signaled that the Saudi-Houthi backchannel talks were not “ready to move to the highest level.” However, the situation changed following the Houthi ballistic missile attack on Jazan and Riyadh in late March, and on April 8, the coalition’s Joint Forces Command announced a two-week unilateral cease-fire in Yemen. This came just a week after the Saudi ambassador to the country, Mohammed al-Jaber, invited the Houthi rebels and the Yemeni government for talks in Riyadh.

The initiative proposed by al-Jaber appeared to mirror the May 2015 Riyadh talks, which the Houthis abandoned largely over concerns about neutrality. However, Saudi policies since the September 2019 attacks on its oil facilities in Abqaiq and Khurais have made clear that the kingdom is looking to secure a face-saving exit strategy from Yemen with an eye to reducing the threats to its territory, limiting Iran’s ability to use the Houthis as cover for its operations, and shifting its focus to evolving internal and external threats. The unprecedented economic ramifications of the COVID-19 pandemic, sharp decline in global oil prices, and credible security threats to Saudi strategic depth as Riyadh enters the sixth year of war almost on its own are all contributing factors to this shift in policy.

On the other side, Abdul Malik al-Ajri, a member of the Houthi negotiating team, rejected Riyadh as a location for talks mainly because the Saudi government has sponsored a party in the conflict, with the chief Houthi negotiator, Mohammed Abdul Salam, reaffirming its focus on bringing about a full-fledged end to the war. This will likely prevent Riyadh from assuming a fallback position as a mediator, a role it played in 1970 when King Faisal sponsored the national reconciliation in Yemen between the Egypt-backed republicans and the Saudi-backed royalists. It also means that there is a dire need to revitalize and recalibrate the UN-sponsored peace process being led by the special envoy for Yemen, Martin Griffiths, with the aim of developing common ground for a nationwide peace agreement between Yemenis, as well as a strategic Yemeni-Saudi post-war roadmap.

From border to nationwide security

The Saudi-Houthi backchannel talks — which exist thanks to American and British pressure — are largely driven by threat perceptions, albeit to varying degrees due to the power asymmetry between the two sides. Riyadh has pursued direct and indirect talks with the Houthis to mitigate national security threats to its territory. In 2016, the Saudis and the Houthis — without the involvement of the Yemeni government — agreed to de-escalate tensions in several northern governorates, including Hajjah, by establishing a joint De-escalation and Coordination Committee to monitor the cease-fire and secure southern Saudi Arabia. However, the plan failed, largely because the conflict wasn’t resolved during peace talks in Kuwait.

The Houthis’ development of drone and ballistic missile capabilities has significantly widened the scope and deepened the extent of threats posed to the kingdom. Regular Houthi attacks on Saudi cities — including Riyadh, some 1300 km from Sana’a — and vital oil infrastructure created further ambiguity around the September 2019 strike against Aramco’s oil-processing facilities, which temporarily cut Saudi oil production in half. In addition to enhancing Iran’s plausible deniability before UN investigators refuted the Houthi claim of responsibility for the September strike, hybrid Houthi attacks exposed the vulnerability of Saudi Arabia’s conventional defensive capabilities and the unreliability of the U.S. security umbrella, even though Riyadh was the world’s third-largest military spender in 2015, 2017, and 2018. Between 2015 and 2019, Saudi Arabia’s total expenditure on arms was more than $340 billion, while the amount spent on the Yemen campaign over the past five years is thought to have been at least $265 billion (given reported estimated costs of around $200 million a day). These realities have heightened the sense of vulnerability in the kingdom, changing Saudi Arabia’s priorities and immediate concerns in Yemen.

As a result of rising threats and security issues in the Gulf region, Riyadh reactivated direct, sustained talks with the Houthis in September 2019, according to al-Jaber. The visits of Deputy Defense Minister Prince Khalid bin Salman (KBS) to Muscat, Oman — which has been a hub for Houthi meetings with British and American officials — in November 2019 and March 2020 show that Saudi Arabia is keen to not only reduce the threat level, but also to find a way out. It is no coincidence that the Houthis were present during both visits of KBS, especially when the Saudi delegation in November included the chiefs of the kingdom’s Intelligence Directorate and Special Committee (overseeing Yemen policy), as well as Crown Prince Mohammed bin Salman’s younger brother.

Following the November meeting and continuous discussions by joint Saudi-Houthi security and political committees, the frequency of coalition air raids declined substantially from 388 in April 2015 to 46 in February 2020, giving the Houthis more leverage and increasing their ability to launch concerted offensives on several frontlines. The coalition also re-opened Sana’a International Airport for medical flights under UN supervision. While these steps were attempts to build confidence between the Houthis and the Saudis, the Houthis used the fog of unannounced de-escalation to make territorial gains in Jawf. And despite the absence of Houthi reciprocity, KBS reiterated the kingdom’s commitment to a “comprehensive political settlement in Yemen” on April 8. With growing regional calls for peace, Muscat’s non-involvement in the Arab Coalition and support for comprehensive peace talks position Oman as a neutral ground to host and facilitate the UN-led peace process.

Saudi Arabia’s current concerns are two-fold: protecting its territory in full, including its shared southern border, and finding a way out of the military stalemate in Yemen. To address these issues, the kingdom has four primary demands: first, halting the Houthi drone and ballistic missile program, starting with ending the attacks; second, stopping Houthi hostilities on the southern border; third, cutting off Houthi-Iranian ties; and fourth, resuming intra-Yemeni peace talks. The first two are immediate and critical for Saudi Arabia’s physical security; the fourth, however, is the way in which Riyadh can achieve a smooth pullout. The third condition is unlikely to materialize but will probably remain a question for the future with regard to Saudi and Gulf security.

The Houthis have two consistently clear conditions for engaging in a serious de-escalation: the withdrawal of the coalition’s remaining forces and the lifting of its blockade of Yemen. While the Sudanese drawdown and UAE withdrawal further emboldened the Houthis on the first demand,  the U.S., the coalition, and the government all have serious concerns on the second over the scale of the Houthis’ illicit arms smuggling should the blockade be lifted during wartime. In view of this complexity, the two demands are broadly tied to a conflict termination decision whose contours involve the Yemeni government — the basis of the Saudi-led military intervention in the country — and the resumption of a political process that defines the transition. Therefore, the current cease-fire does not meet Houthi maximalist demands, nor can it hold in isolation from serious peace talks, based on the evidence since 2015.

Saudi Arabia, as a regional power, cares for its international prestige and will concentrate its efforts on ensuring an internationally face-saving exit strategy from Yemen. This means that the prospects of withdrawing the remaining coalition forces and/or lifting the blockade are to a great extent contingent upon the conclusion of a politically negotiated settlement between the government of Yemen and the Houthis.

From a Saudi viewpoint, halting Houthi missile attacks on Saudi Arabia could be reciprocated by either suspending (at best) or reducing (at worst) Saudi air raids on the Houthis, which could easily be resumed whenever the benefits outweigh the costs. As for the border region, the Houthis have made it clear that the cessation of hostilities in southern Saudi Arabia is tied to their two central demands, in a bid to maintain their leverage and bargain from a position of strength.

Severing the ties between Iran and the Houthis seems ambitious under the current conditions. Iran and the Houthis share more than just common goals, for two primary reasons. First, the Houthis owe much of the success of their insurgency to Iran since the formation of the Faithful Youth (al-Shabab al-Mo’men) in the 1980s, and have received significant strategic support ever since. Second, the Houthis share Iran’s “Shi’a crescent” expansionist ambitions. They are integral to the Iranian-led “Axis of Resistance” given their proximity to the strategic Bab al-Mandab Strait, control of which can be used to choke maritime trade whenever needed.

With the international community welcoming the coalition’s unilateral cease-fire and throwing its weight behind the UN’s special envoy, there is for now no sign that the Houthis will halt their military activities inside Yemen. A day after the announcement of the cease-fire, the Houthis confirmed their intention to continue fighting in Yemen until the blockade is lifted or a comprehensive agreement has been reached. Given the volatile security landscape in Jawf Province, as well as the recent Houthi ballistic missile attack on Marib, shelling of houses in Hodeida’s Hays district, and the deployment of military reinforcements in Bayda after the announcement of the cease-fire, fighting looks set to continue in Yemen for the foreseeable future.

Put differently, the coalition’s cease-fire aims to reduce conventional and non-conventional attacks on Saudi Arabia, and has yet to address the issue of conflict resolution in Yemen. In the absence of pressure from air power and with fatal divisions apparent within the coalition-backed forces as Houthi-Saudi talks progress, the cease-fire could end up once again enabling Houthi territorial gains. Unless the Saudi-Houthi backchannel talks are genuinely meant to support the UN-led peace process, rather than just exploit the urgency around the COVID-19 pandemic or address immediate Saudi concerns, they will doubtless face setbacks and the cease-fire will collapse, just like all the previous ones did.